What approach should be used for strength and reliability? April 2, 2002

Question
I want to build a saw shed with a clear span of 20 feet for my access to the saw. Can I do this with a wood beam? How big would it have to be? Could this be made out of beech, red elm or poplar (this is what I have most of)?

Forum Responses
Minimum roof loading is 20 lb/sq. feet, more in presence of snow. For a 20 foot span, wood beam needs to be minimum 18 inches deep. If smaller, beam will sag ugly! Better design with truss 2 feet deep or more depending on snow load. Almost any wood will do the same - geometry of beam or truss is the important thing. If not satisfied with proportions, use steel which is some 30 times stronger than wood.


I got some strait logs and used them for my rafters. It has held up excellent to our Western NY weather. No sag that I can tell, because I leveled the purlings after the log rafters were in place.

I built my own 30' trusses, but I had to get my design approved by an architect after the building department caught me in the act. I would recommend finding a truss building company and buying some 30' trusses at about $1.50 per square foot of roof. They will get your location's snow loading right.

I agree with having someone who knows how to check your engineering. I built my own saw shed, incorrectly, and when putting on the metal roofing, the beam began to sag ugly, very much so. So I stopped putting the roofing on and put up a blue tarp. Several tarps later, this roof failed. Luckily no one was hurt and there was only like damage to my equipment. My new roof (still under construction) has steel I beams for the long span and wood above. Metal roofing still going on. Won't fail this time.

From contributor A:
If you want to do it yourself, why not look at Geodesics. Bucky Fuller popularized this in the 50's and 60's with the idea that anyone can build a vast span out of small bits of wood. When I was young I built one with my dad that spanned 20' of 2 1/2 square section. Fine job.

You can build them any shape - I recommend a 'tunnel' shape, which is called a 'Zome'. It means that you don't need any heavy lifting equipment and you can mill all of the components and the cladding yourself. It will take any amount of battering from wind and snow without damage, primarily because of the shape.


I have a 30' opening and 18' to the bottom of the header. My header is an old growth Douglas fir that is 8" thick and 27" wide. It is a beautiful piece of nature's work converted to the use of man. I have had up to 21/2' of snow on the mill building and not had a problem.

I would use laminated veneer lumber. It is stronger than steel and you can nail to it. Go to a lumberyard and get the specs - they should be able to tell you the size you need.

I have talked to a guy that built a 40 beam like laminated veneer lumber. He glued several layers of boards and plywood together with, I think, a 2 inch bow. The bow goes on top to account for the sag. Worked well for him.

My old sawmill has a 20' span on 8x10 hickory. Also used knee braces that cut the span down to16'. Have had 30" of snow on it and it's stood 21 years. It does sag slightly. But not as bad as an oak beam of the same size and span on the same building. With my new mill, I used 25' steel with no worries. If you only plan on building this once, use steel and build it twice as big as you think you will ever need. I did and it isn't big enough yet!

Have any of you seen a T type shed? You don't have any post in your way. Just two or four big posts that hold up the trusses. I saw one in Eastern Tennessee this past year. It looked like it worked great.


From contributor S:
I saw an article in Fine Homebuilding years ago that was called something like "Building Boxbeams". The author built a 16' long beam out of 2x6's and 1/2" plywood and suspended a Chevy Blazer from the center. He hung the Chevy there for some months as I remember, with no deflection. The 2x6's were on the flat and there were 2 layers of plywood on each side. The plywood was glued and nailed, in a particular pattern, to the 2x6 and the joints were staggered. I think the beam was 16" tall.

I have used LVL lumber for many years, as I am a framing contractor by trade. It may be stronger than steel pound for pound, but the costs of LVL should be weighed versus steel. I have seen many LVL beams that an "engineer" has specified sag like warm butter. One in particular - an engineer working for the lumber company specified 2 pieces, 1 3/4" x 18" X 20' LVL for a garage door header. There was a huge point load in the middle of the header. We ended up using 6 pieces of that size, 3 wide and 2 high, and there was still a 3/4 inch deflection (sag).

Another method is bolting a steel plate to a wooden beam either in the middle of laminated beam or on one or both sides of a beam. I'm no engineer, but when you get over an 18' span, I like steel. Go a little heavier than needed.

From contributor S:
Bolt the steel plate on the outside of the beam. Just did that on a carrying beam in a basement. I had to remove a lally column and move another column over. I bolted a piece of 1/4" x 9" steel onto both sides of the existing 2x10 triple beam. The span was only 14' so it was overkill. Works like a charm. I like to jack up the beam so it has a crown up and then apply the steel plate.

From contributor A:
Here are the plans my dad prepared for the geodesic dome. To make this into a tunnel or ‘Zome’, you just make some triangles for the middle section with vertical rather than inclined ‘V’ cut. That will produce a vault shape with the hemisphere on either end.

R. Buckminster Fuller is the guy who popularized the concept and raised the idea of the space frame (three dimensional truss). It's the most acceptable way to clear span any large distance. The lighter the structure, the better.

Making these things out of timber is easy but when you get into a space frame I would guess that it is far better to consider a steel tubing approach. Cladding can be anything as long as there is adequate overlap at the joints. I like the idea of timber shakes/shingles myself because it breaks up the rather stark geometry and softens the lines. None of these ideas should have any problem with snow loading as the stuff will not stay on the continuous curvilinear shape for too long. And at any rate the load is spread throughout the structure rather than concentrated on one member. 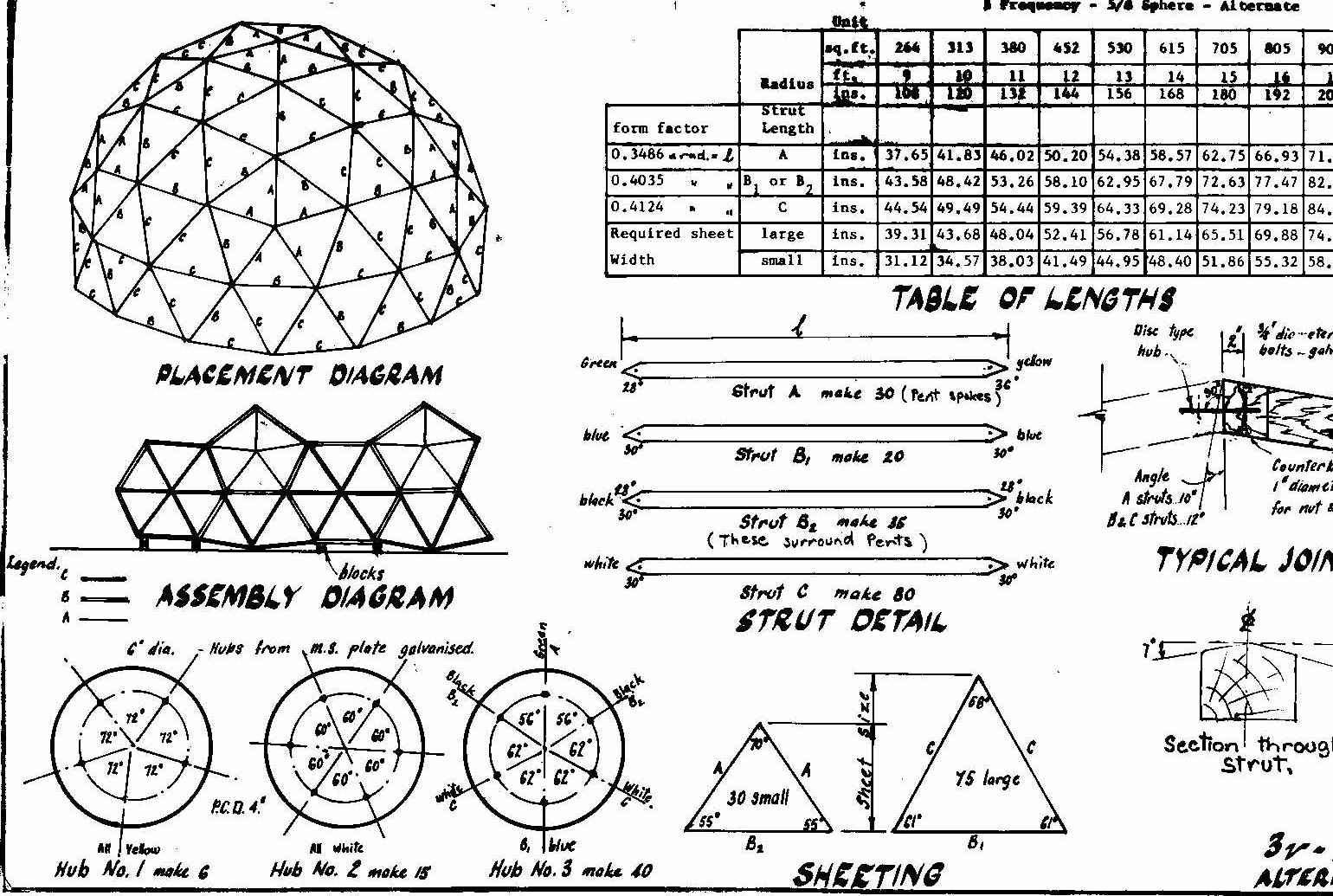 
I had a farmer come and get a truckload of oak 1x6 culls. He made a beam across his barn (24') so he could break his tractor in half and fix the clutch. He staggered the seams and nailed them together. After three rows he picked it up with the forks and held it there while he added more until it was 14" high (ran out of wood). He added some knee braces and put on his come-a-long and took his tractor apart. I guess this is LVL hillbilly style.

How about putting the door opening on the gable end side of the building? There wouldn't be a need for a "header" under the gable end truss. This should work as long as you built your building with a typical trussed roof system and not a "shed" roof.