Examples of how woodworkers have recycled pallets and other old wood into new products. June 5, 2002

Q.
An organization in St. Paul, MN is recycling old pallets into value-added products such as planter boxes (for flowers). A Colorado furniture maker has produced a line of tables, dressers and desks from pallets (the last I'd heard he was marketing them all over the country). Does anyone know of additional creative (value-added) products from pallets?

As you know, pallets are very valuable and consume a large amount of our hardwood lumber resource (the largest user?).

Did you hear the story about the guy that every morning showed up at customs driving a big truck across the boarder? Every morning the agents would check his truck for illegal stuff, but all he had on it was 12 pallets of hay, which were not taxed. So they let him through. After 20 years, he finally announced that he was retiring and had quite a nest-egg set aside for his retirement. The customs agent said that he knew that he had been smuggling and avoiding taxes for 20 years, but could never figure out what it was. He promised that if he told him, the agent would not prosecute him. The answer? He was smuggling pallets... dumb story.


A good friend of mine doesn't use pallets, but other "junk" wood and old wood stove parts to build some fine looking furniture. And he also sometimes uses imported exotic hardwoods combined with the stove parts.

Here is a picture of one of his creations. The base is from a cook stove. The door grate, I believe, was an oven rack from another cook stove as were the warming shelves. The wood was taken from an old fallen down building. 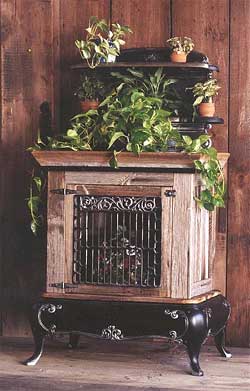 I've thickness-sanded thinner pallet boards (too dirty and wild grain to plane) and glued them up to make 1/4" panels for cabinet doors. Stain, mineral streak, knots, curly grain all help make it look great, especially with a frame made from birch or maple. There are a huge number of products waiting to be made from wood like this. Have fun with it.

The USFS research office in VA did a project a few years ago making thin oak flooring from used pallet deck boards. This a nice product, but they felt too labor intensive to be practical. A friend of mine here in KY is working on developing the same product again, and I think we have the cost element contained at this point.

At times we seem so constrained by the historical definition of quality.


Yes, I would consider 'pallet repair' as value-added. Over the years I've seen a few pallet manufacturers separating out some of their better clear parts and marketing them to higher value outlets such as cabinet/furniture manufacturers.

Also, Lee Valley is reproducing books from the turn of the century (the 20th century) which contain plans for projects exclusively from "recycled" wood. The forward of the book stated that there was something like a million board feet of lumber used as packing crates at the time. An excellent book.


The amount varies from year to year but something in the neighborhood of 4 to 5 Billion board feet of lumber is used annually in the US to produce pallets and related timber packaging/shipping products. (Pallets are the number one use of hardwood lumber in the US.)


This End Up furniture company was started when a college fraternity party destroyed the furniture in a house. One tenant got creative in replacing the furniture and ended up with a chain of retail stores in malls everywhere. I'm sure that from prototype design to manufacture the pallets were replaced in favor of nicer wood, but the original design was inspired by what you could do with a crate.

I have seen flooring made from pallets and many pallet recyclers. On a custom level I have even made small furniture pieces and boxes from old pallets.

Comment from contributor L:
I have made an attractive looking fence out of pallets. It looks a lot like white vinyl panel fencing. My husband bought 6 ft. posts and ten ft. 2x4's and framed it for me, then I used 42 in. slats that were 3.5 in. wide for the panels. I had to pre drill the holes before attaching them to the frame. Some had to be cut down to 42 in., and most had to be pre arranged and fit like a puzzle so there would be no gaps because they were not perfectly straight. Then my husband and I attached 2 ft. high strips of lattice panel above that and voila, a very attractive privacy fence for pennies on the dollar. The last step is to seal it with water seal and it will be finished.


Comment from contributor P:
I built an oak workbench frame from the longitudinal pieces salvaged from pallets used to ship solid surface material (Corian). These rough oak 2x4’s were easily eight feet long. Not all were usable, but they made a strong workbench with the addition of a couple of pieces of salvaged flooring plywood. The bench has been going strong for fifteen years.