Ambrosia Beetles in a Chainsaw Bear

Characteristic fungal growths turn out to be the telltale sign of Ambrosia beetle infestation of a chainsaw sculpture. June 14, 2014

Question
I have a question, and I’m hoping maybe you can help me. My dad purchased a chainsaw carved bear for me last week and it was given to me this past Thursday. On Friday, I noticed some things growing out of the sides of the bear that look like little white strings, about two inches long. I got a broom and brushed them off, and within two hours of me brushing them off, they had already started to grow back! I have no idea what they are, they don’t appear to be moving so I don’t think they’re worms necessarily, but I have no idea what they could be. I don’t know what type of wood it is made out of either.

I have asked a few other people and they have no clue as to what it is. I was hoping to put the bear in my house instead of leaving it outside, but until I find out what the strings are and I get rid of them I don’t want to bring it in my house. There was also I white, waxy looking substance on top of the base, and I’m not sure what that is either, I assumed it was some kind of tree sap, but it brushed off when I swept it with the broom. Even if you can’t help me, do you know of someone else I would be able to contact that might know?

Forum Responses
(Forestry Forum)
From the original questioner:
Here are some pictures, hope these help! I have talked to quite a few people over the last few days about what this could possibly be. I've received about four different responses - mold, fungus, beetles, termites or carpenter ants. I don't think its bugs because I haven’t seen any bugs crawling on it or flying around it, and the white things aren’t bugs because they’re not alive. I'm more prone to think it's some sort of fungus or mold. I brushed the bear off when I got home and sprayed Lysol all over it and scrubbed it with a brush, so I'm curious to see what that does. 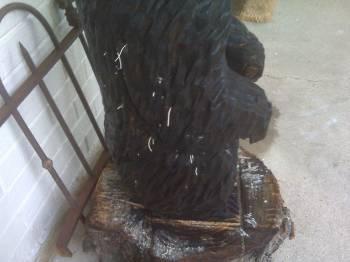 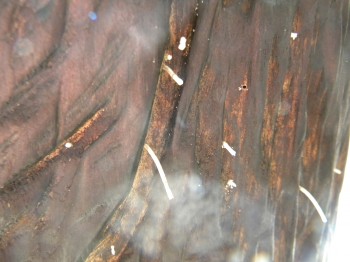 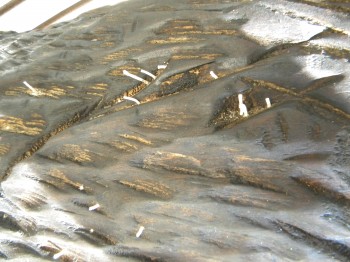 From Contributor Q:
It’s definitely a fungus. If it where bugs you would see evidence of the bugs. What you are seeing is the fruiting bodies from the fungus. If you live a humid area they can produce quickly. You might try some diluted Clorox.

From the original questioner:
I’m glad to hear it might not be bugs! I sprayed the bear with some Lysol last night after brushing off all the strings, and it seemed to have slowed down the growth. They were only about a half inch long this morning (usually they grow between one and two inches overnight). It was also chilly last night, so it might have just been the cold weather that slowed them down. I am going this afternoon to pick up some Borax and Clorox. I'm going to try mixing each one with water and spraying the bear with a different mix on each side to see which one has better results.

From Contributor G:
I doubt that borax will do much, but the bleach is a good idea. What is the texture of the strings like?

From Contributor Q:
Is the bear kept outside? Does it get rained on regularly? If the moisture content of the bear is greater than 20% it is an ideal habitat for funguses. If you live in a humid area that doesn't help either. There are wood finishes you can get for exterior use that have a fungus inhibitor.

From the original questioner:
Well, come to find out I have ambrosia beetles in the bear! The white strings are apparently a fungus they produce to feed the larvae. After injecting the beetle holes with the Borax and Clorox the other day I have noticed a significant improvement! Yesterday when I got home from work there were no strings coming out of it at all, and then this morning when i got up there were only two, so hopefully the bleach and borax is killing them! I talked to a forestry professor at LSU and he said once the wood dries out more that will slow them down because they’re attracted to the moisture, and later in the year when the temperature gets colder they will stop also. I’m hoping if I keep treating it every day with the bleach and Borax I can kill them before then.

From Contributor G:
You may have better luck with an actual insecticide for killing the beetles.