Question
I need help identifying the wood below. I don't have much to go on. I cut it a while back. It air dried for several months and I just pulled it from the kiln. 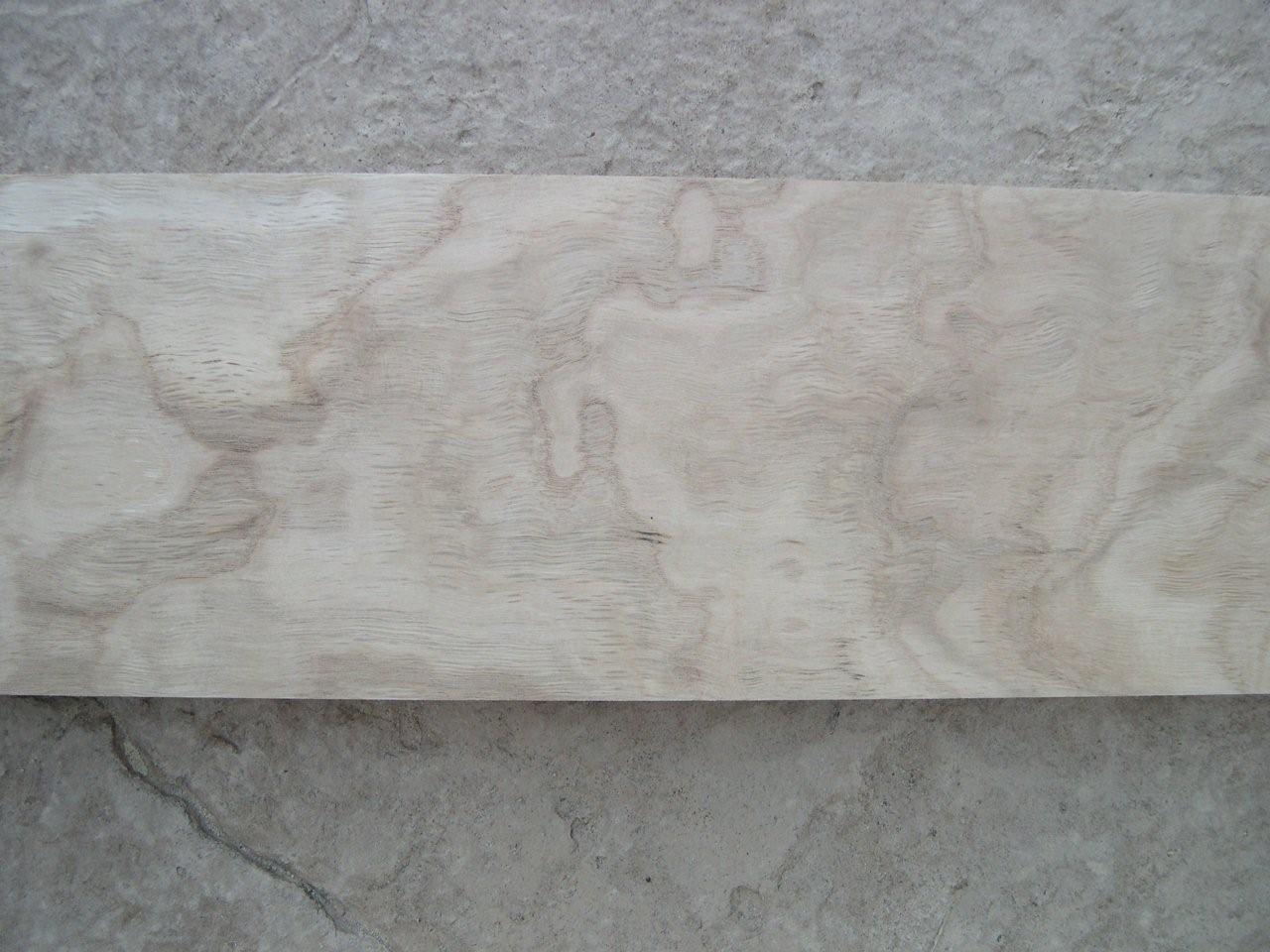 Forum Responses
(Sawing and Drying Forum)
From contributor M:
We don't have much to go on, either. How about your location, a picture of the end grain, a guess as to the density?


From the original questioner:
Sorry for the quick post of the pic, I was running out the door at the time. I'm going to take a few more pictures of some of the rough cut stock and see if there is a piece with bark on it. I have a tree trimmer that occasionally brings me logs. Several months ago he brought me eight logs and said they were pecan. This is what I got out of one of them. I just cut a couple more logs of what he brought me and got nothing like this out of them. I'm in Boykins, VA.

From contributor M:
It reminds me of southern sugar maple that I have worked.

From contributor O:
Looks a bit like persimmon. Is it heavy? Does that tree grow in your area?

From contributor Z:
Based on the info shown, I believe contributor O nailed it, persimmon.

From the original questioner:
Here's a picture with some bark on the board. 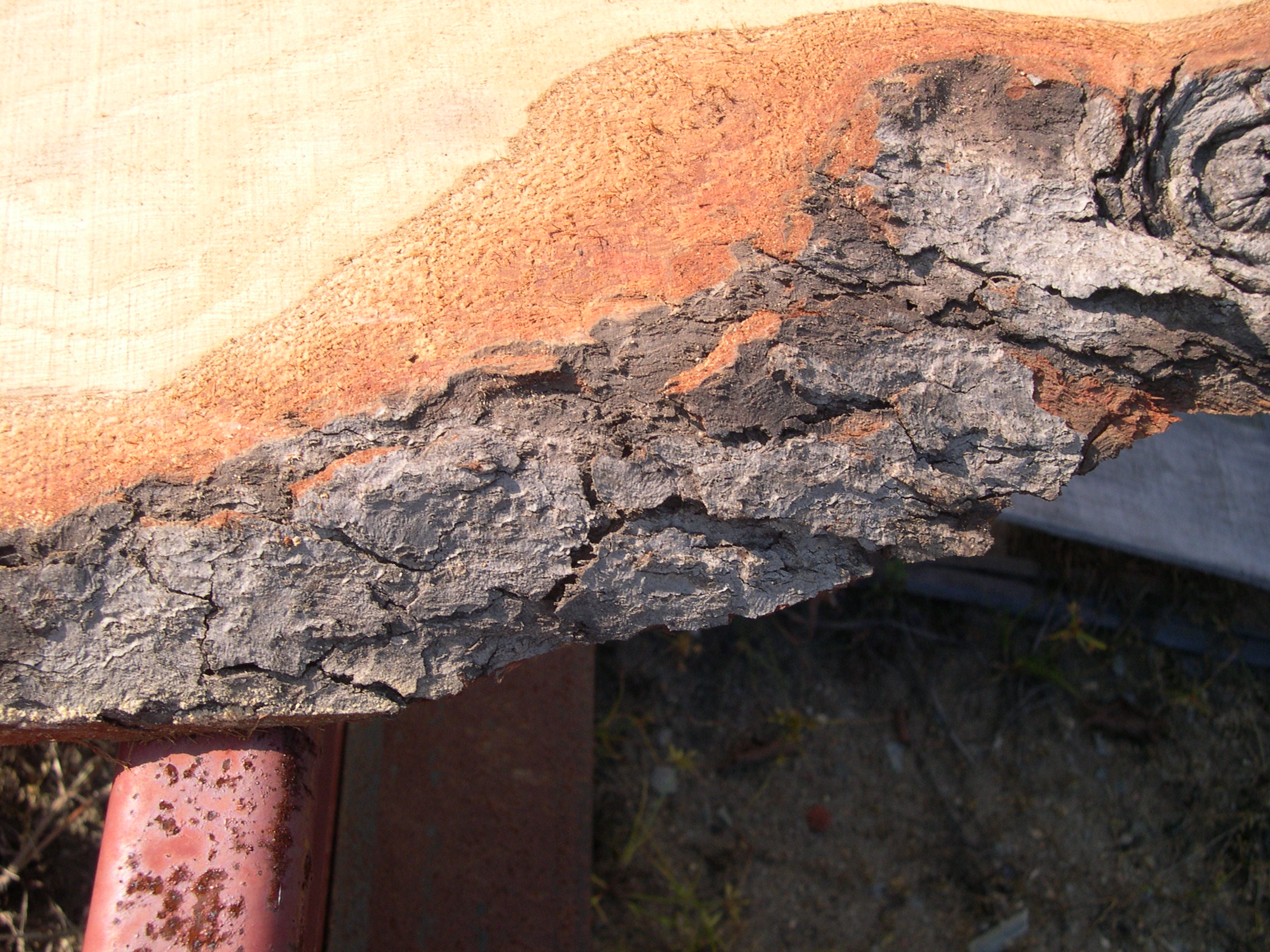 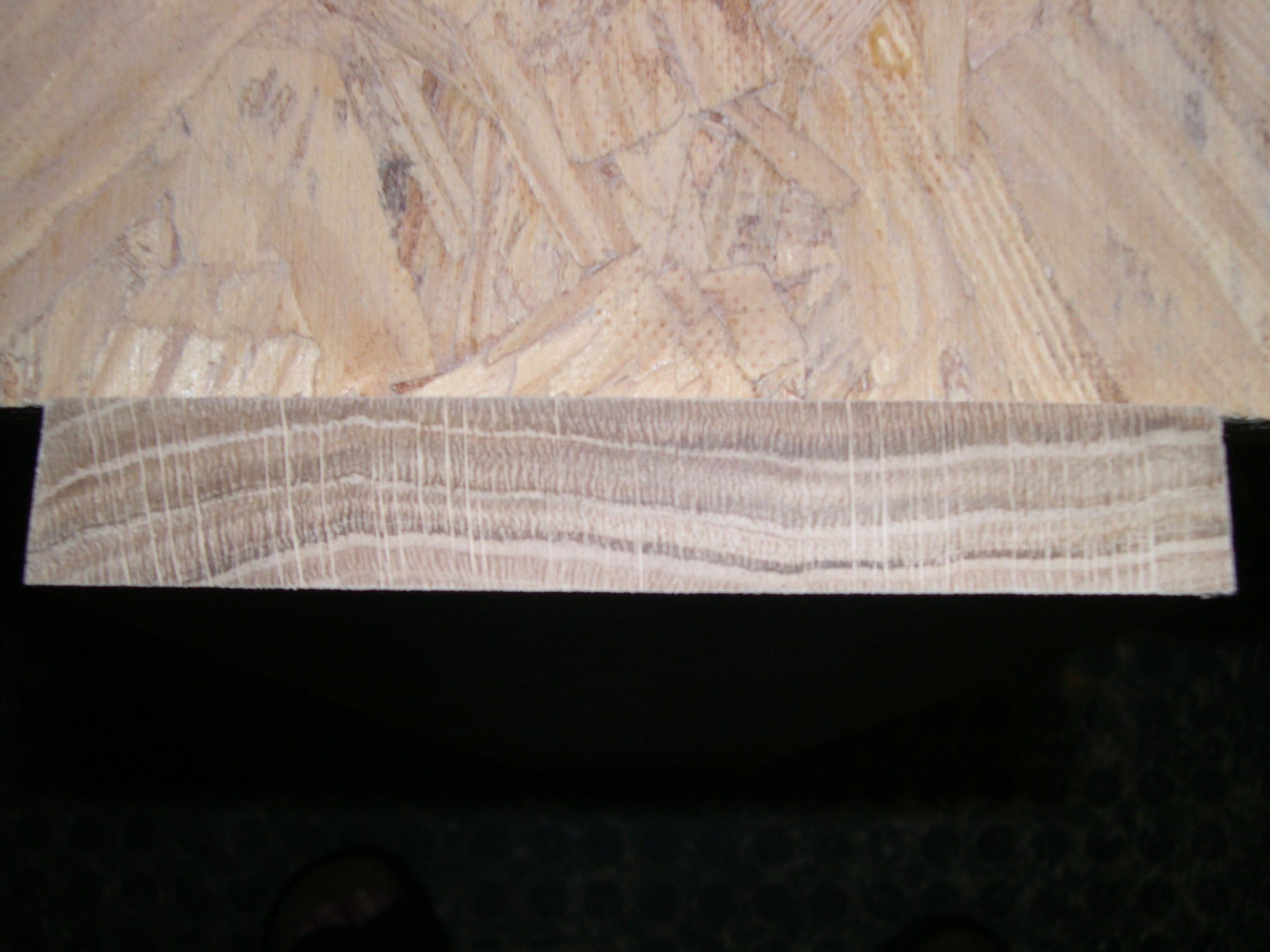 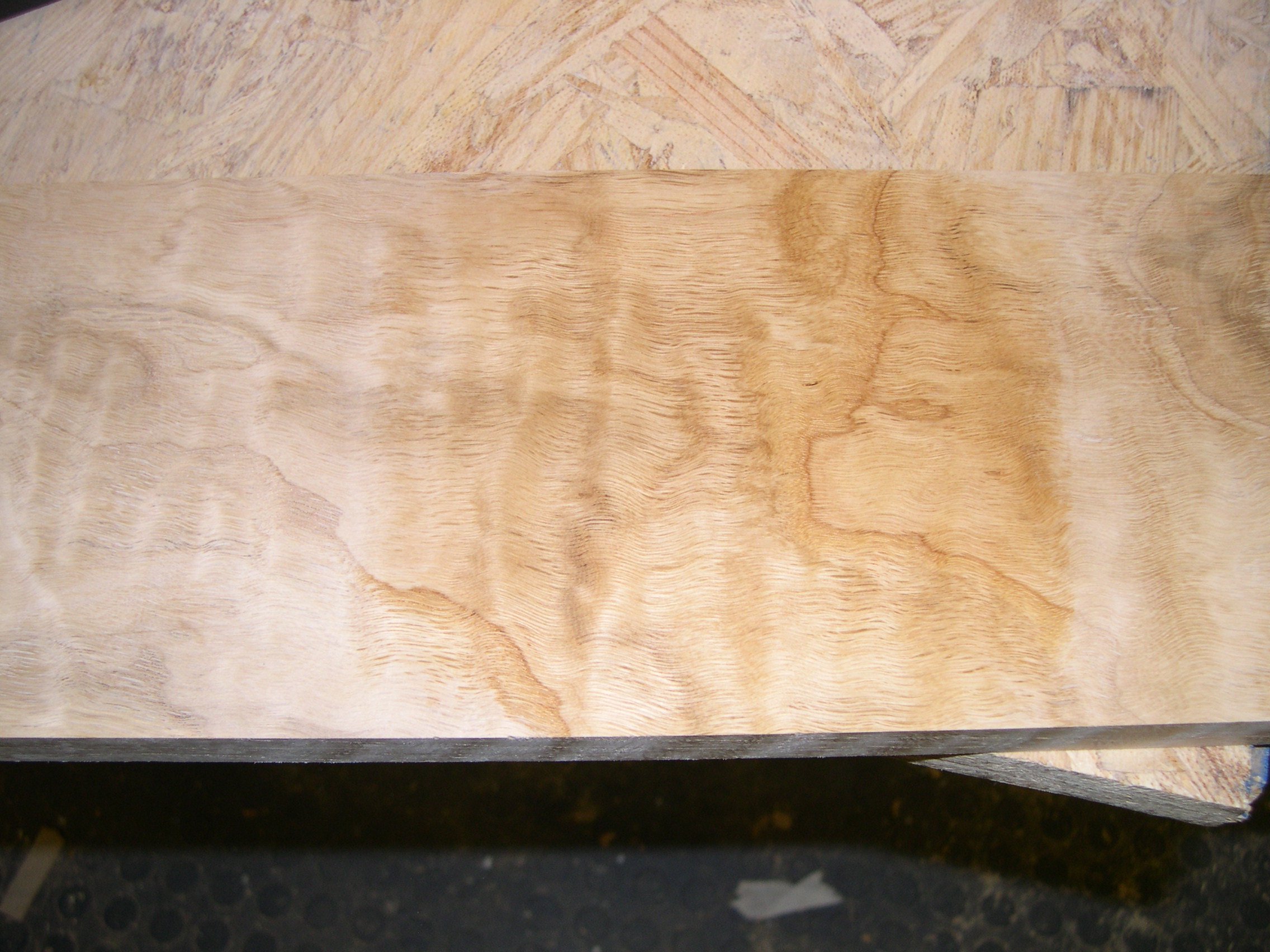 
From Gene Wengert, forum technical advisor:
Check the link below. This looks a lot like hard maple. The two different ray sizes are unusual for most species.

From contributor R:
Looks like blue beech or birch to me.

From contributor M:
The bark looks like maple. Both birch and beech have very distinctive bark.

From contributor O:
If it was persimmon and came from a mature tree the bark would be very blocky (alligator, checkerboard) although I cannot tell from the small shot of bark.

From contributor R:
It's likely pecan. The first picture is probably compression wood or limb wood. The photo with bark sure looks like pecan.

From the original questioner:
Here's another shot of a board with the bark. I don't remember the entire log with bark as it was a while ago, but what little bit is still on the board is very much like the four logs I have to cut this weekend. I got about a 75 BF out of this log all with the same figure as the one pictured I'm guessing it was around 15" diameter. I'm hoping one of the last four logs will be the same then I can take a picture of the entire logs bark. I did a search on curly hickory on Google and found a piece of furniture someone built calling it curly hickory, and it had a lot of the same figure, just not as dramatic. 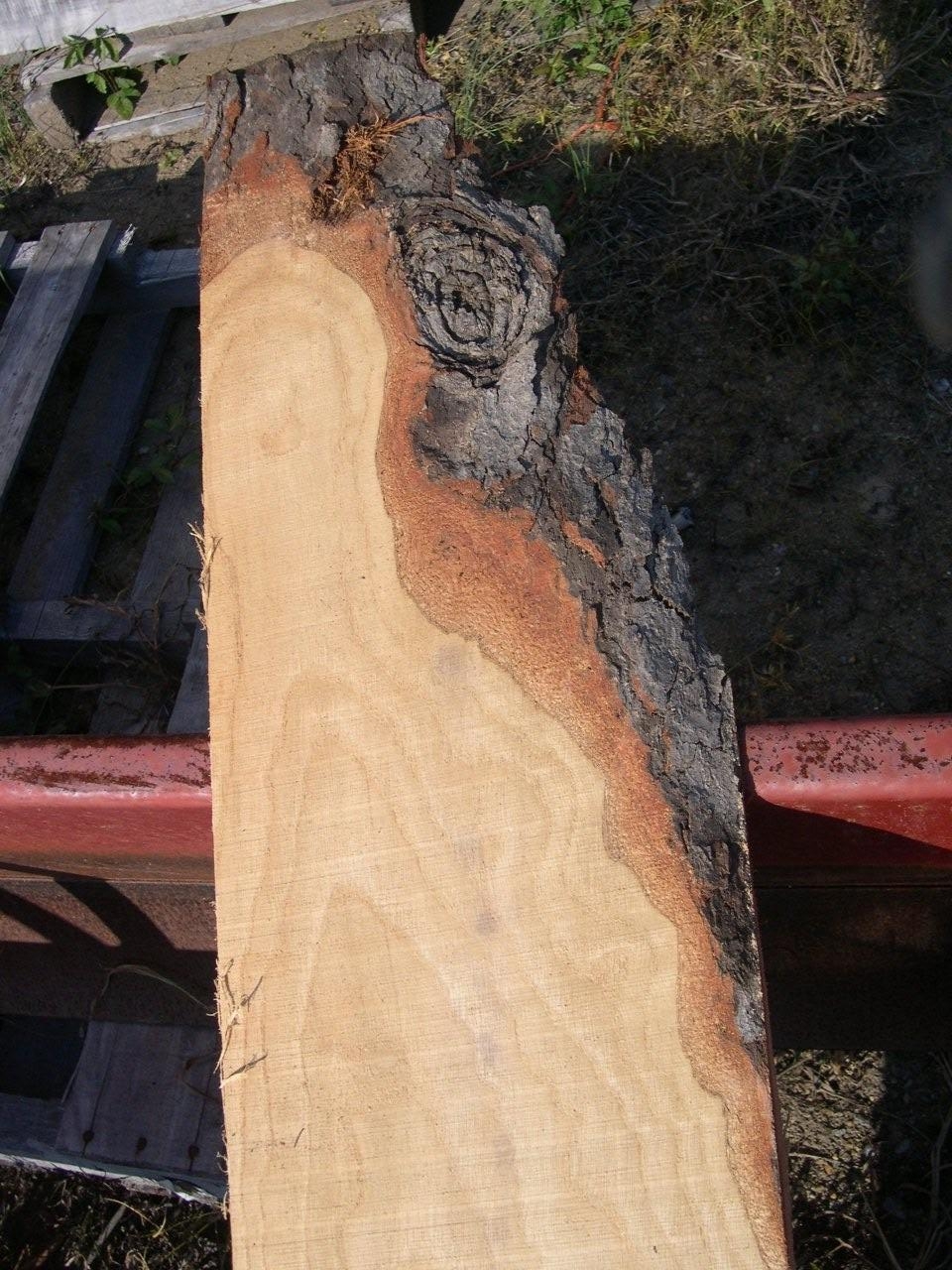 
From contributor Z:
The ripple or wavy grain on the tangential surface sure does remind me of persimmon. After seeing the bark and taking a second look of the wood grain, I'm going with pecan.

From contributor H:
It does look like pecan. You mentioned curly hickory, pecan and hickory really favor a lot. Some people around here put pecan and hickory together when they cut and sell it. We cut some pecan a while back and some of it looks a lot like what you have.

From the original questioner:
Same around here. Hickory pecan is the same to everyone here. Usually hickory pulls more hits on Google images then the pecan does, so that's when I found it.

From contributor V:
Honey locust sapwood should be very light and heartwood will have a orange to red look to it has the rays as shown it endgrain photo pecan does not I have built furniture out of it nice wood.

From the original questioner:
Just when the majority was thinking pecan/hickory, maple is back in the mix. I would love to know for sure what it is. Hopefully the last four logs show something similar and I can get a picture of the entire log on the mill. Love the figure in it.

From contributor C:
I'm with contributor A - definitely maple. The bark looks like cut leaf maple. It is not the right color for hickory. If you want to rule out either maple or hickory, shave a few pieces off a board and burn them. Both woods have a very distinct smell when burned and you will immediately know if it’s one of the two or neither.

From Gene Wengert, forum technical advisor:
When identifying wood, we consider the color, but the key is the end grain, and any patterns from the ray cells or perhaps parenchyma bands. The surface appearance is not a reliable indicator. As I stated, the two different size rays and the appearance of the end grain strongly suggest hard maple. The face grain is typical of hard maple. The bark is indeed maple.

From contributor V:
Is it open or closed grain? I can't tell from the photos. The face grain looks as though it is open and on the end grain photo I can't tell.

From contributor R:
I agree the end grain does indeed look like hard maple. I can't comment on the bark, it doesn't grow in quantity down here. As far as hard maple goes that is some ugly hard maple, yet good looking wood.

From contributor K:
It looks like black cherry. The bark has the corn flake look. I have seen this wood light in color after it has dried before. I have seen that grain before too. Interesting piece you have for sure.