Here's a universal complain from cabinetmakers: it's dern near impossible to find out the dimensions of a kitchen appliance without measuring the actual appliance.November 27, 2012

Question
I've been a cabinetmaker for 23 years. In that time the process of running down appliance specs has gone from driving to the local appliance store to pick up the brochure, then to printing off about 25' of thermal fax paper looking for secret codes which then allowed you to print off another 10' of thermal fax paper. Then the internet came along.

The appliances themselves have evolved from clunky 2" outset frames to sleek built-in flush models allowing for seamless integration into contemporary looking cabinets. In all of that time, after all of that research and development by the appliance companies to change their designs and better integrate to cabinetry, they still haven't found a clue about what we need to engineer the cabinet. All I want is a section view from the side and from the top, showing me how much the damn thing overlaps the rough opening on the top, the bottom, and the sides.

It doesn't do me a bit of good for you to provide me a rough opening and an overall height. Not everybody builds a 33" face frame box with 3" frame rails planning to cut the thing in with a skill saw at installation.

Heck, the oven costs $3,000! Some actually are fitted to 1/8" reveals surrounded by horizontal Quartered Anigre panels and we want it to look nice. It would be nice if the proper information could be posted on websites. Does anyone have any thoughts?

Forum Responses
(Cabinetmaking Forum)
From the original questioner:
Here's an example. Can someone tell me from the attached drawing how much this oven overlaps the top? How about the bottom? Are we to believe it comes as a cube, perfectly miter folded as shown? 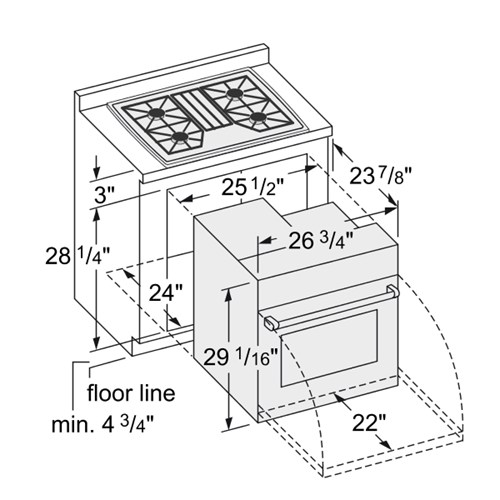 
From contributor B:
Agreed – it’s a hassle. I recently spent 30 (unpaid) minutes on the phone with a customer service rep trying to figure out if their specified dishwasher door panel height (30 1/8" max) could be increased 1/8" to match my adjacent fronts. Nobody could tell me anything, other than the scripted "we don't recommend you do anything other than what's in the specs". Of course, when field-installing the shortened door/drawer front combo, I recognize that their height spec was completely arbitrary, there's plenty of space to increase the height, and the 1/8" dip relative to the adjacent cabinets looks bad. The decorator, contractor, and client were all warned, so I was covered. Nobody wants to spend the money for a new panel and pigmented CV finish, but I don’t like leaving work that isn't the best it can be.

From contributor E:
Oh so refreshing to know I am not the only one with the same issue. I was trying to fit a 35.75" fridge into a 36" opening and the fridge was too wide. I butchered the whole frame of the 8' cabinet. I have never had a double wall oven fit yet with over four manufacturers.

From contributor D:
You haven’t seen anything yet if you have never installed one of those curved glass island exhaust hoods - it made the others look easy. The electrician passed on it and so did the plumber, so that left the cabinetmaker to read the instructions and basically re-fabricate the unit to suit the application eight hours later. We don't have any specialists who install appliances it is usually the GC, carpenter, or cabinetmaker on the job that gets it done.

From contributor L:
Rarely have I had to install the appliances. Around my area the electrician installs the microwave, and if the range is electric he installs that. The plumber installs the dishwasher, and generally speaking when the refrigerator is delivered the delivery people hook up the water and slide it into position. The majority of the specifications that I have run across have been adequate but not always perfect. I feel that a part of my job is to make sure that the appliances fit and that is reflected in my price.

From contributor W:
Listed in our contract is the clause that the owner or responsible party must provide the invoice with model numbers before fabricated anything. We had a lady who tried to swap a double oven in once (and act like I was some kind of lying fool) until I found the dock manifest where she switched it out for a scratch and dent. Her husband dealt with us from that moment forward. It is no different than field measurements. Also, we are not electricians nor plumbers so we do not act like we are. I have no insurance nor am I in a position to repair damage caused by leaks or broken equipment. Recently a newer employee was asked to paint some trim and he got paint all over some expensive wall paper - he is paying the $1,000 replacement cost.

I ask for the invoice because it is the document which contains the model numbers actually purchased. The model number allows me to get actual specs for the unit. It is rare I have to get the unit in the shop. We are doing a kiosk for a mall with a special built donut machine, and in this case I made them bring it to me. I always have large footage, trucks, and forklifts but I can understand how space works. This client started having the shipping companies send me his materials mixes paper and supplies. I would not even let them take it off the truck. He was miffed yet this is not what we do. 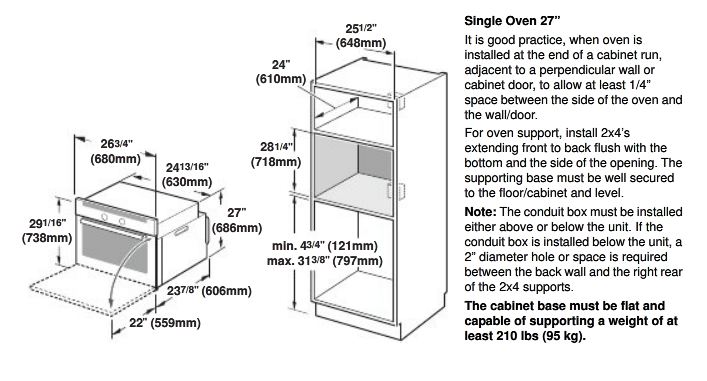 
From contributor U:
This is also a problem I have. About one in four kitchens I run into this and no one wants to take responsibility for this. If a good sized face flange is to over-lay an opening it's not much of a problem, but an inset with exactly a 1/16th to an 1/8th reveal is cutting it too close. One client doesn't mind a 1/2", and the next wants it almost touching. We have others install the appliances but if they don't do it perfectly everybody calls us to take care of it and no one wants to pay for any additional time spent. They just don't know why it was ever a problem. Make an opening and shove it in, right? There’s so much competition these days that it’s tough to estimate much elbow room into a bid. I’ve been biting my nails over the numbers for three plus years now and sometimes the client doesn't know the difference between Ikea and handmade cabinets. There's a lot less trust out there these days because the last guy the client dealt with ripped them off. It’s disheartening to say the least. I think you expressed a very real problem among a lot of problems in our business I'm seeing of late.

From contributor Z:
I have to agree with you so much, but I am coming from a different background. I repaired appliances for 15 years, and have had too many refrigerators burn out simply because there was not enough clearance for the air to circulate. I know some of the cabinetmakers personally, and they are tops in their field. If they would have known how much clearance to put around the unit, they would have done so. I have spoken to so many “engineers” at the factory that have never even considered how the unit would operate at the top of Vail Mountain in CO (11,500 ft. elevation). It works on the coffeemakers too, since water boils at less the 150 degrees F up there. Even in Denver which is only a mile high it affects the amount of air you have to pass over the unit.

I have no idea why they can’t keep it simple. I mean all you are asking for is just the specs of their unit. I had a very well-known manufacture of high end restaurant equipment that told me when I called about the wheels bending up under the unit after the customer moved it to clean under it say: “Well you aren’t supposed to move it with anything in it!” I mean the customer is supposed to take his inventory out anytime they want to clean under it? Why isn’t that printed in big red letters on the owner’s manual?

They act like you don’t know everything about their product, and all they need to do is print out the dimensions. I really liked the idea of the file “for the cabinetmaker”, but that makes too much sense. Let the guy who makes the cabinet know how much clearance the fridge needs so the air can get to it.


From contributor S:
Before I retired from the shipbuilding business, this was a frequent problem. The vendor would deliver an item and the shipyard had to integrate it into the ship. Either it wouldn’t fit or the vendor changed a dimension. Some of these problems could cost a million dollars plus.

From contributor D:
Now I never said I didn't get paid to install the island curved glass and stainless hood that needed to be re-fabricated to suit the application. The clients were very generous. I just said let's do this and I never touched a wire. I had the time, and the client trusted me and I saw his frustration so I used the same skills we use most every day - problem solving, engineering, designing, and doing what it takes to make things fit while making a living. The specs, although difficult to read, have always been true.

From contributor I:
I understand the problem and have dealt with it for 25 years. It is really very simple. My clients have their appliances delivered to me prior to construction of their cabinets. I charge for installation and everything looks great. No muss, no fuss - no brainer!