An introduction to the important characteristics of various saw blade types. November 24, 2008

Reprinted with permission of Rockler Woodworking and Hardware.

It pays to be selective when you shop for saw blades - making smooth, safe cuts with your table saw, radial arm saw, chop saw, or sliding compound miter saw depends on having the right blade for the tool and for the type of cut you want to make. There is no shortage of saw blades on the market, and quality and performance varies dramatically from blade to blade. 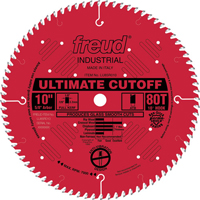 How do I pick out the right saw blade?
Saw blades really aren't all that complicated. To put together the perfect saw blade collection, you just need to know a little about what different types of saw blades do best, and about what separates top-quality saw blades from the rest of the pack. From there you'll be all set to choose the blades that best suit your woodworking needs and budget.

Saw Blade Essentials
Most saw blades are designed to do their best work in a certain type of cutting operation. There are blades designed for ripping lumber, crosscutting lumber, cutting veneered plywood and panels, cutting laminates and plastics, cutting melamine, and cutting non-ferrous metals. There are also "general purpose" and "combination" blades, which are designed to work well in two or more types of cut. What a blade does best is determined by the number of teeth, the type of gullet, the tooth configuration and the hook angle (angle of the tooth).

Number of Teeth
In general, blades with more teeth yield a smoother cut, and blades with fewer teeth move material faster. A 10' blade designed for ripping lumber, for example, usually has as few as 24 teeth, and is designed to quickly move material along the length of the grain. A rip blade isn't designed to yield a mirror-smooth cut, but a good rip blade will move through hardwood with little effort and leave a clean cut with a minimum of scoring. 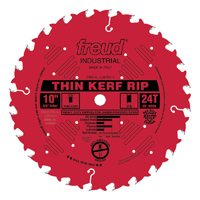 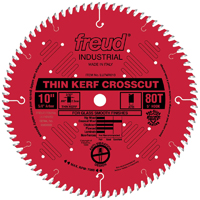 
The gullet is the space cut away from the blade plate in front of each tooth to allow for chip removal. In a ripping operation, the feed rate is faster than in crosscutting and the chip size is bigger, so the gullet needs to be deep enough to make room for the large amount of material it has to handle. In a crosscutting blade the chips are smaller and fewer per tooth, so the gullet is much smaller. The gullets on some crosscutting blades are purposely sized small to inhibit a too-fast feed rate, which can be a problem, especially on radial arm and sliding miter saws. 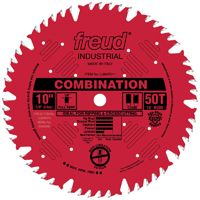 Flat Top (FT) Flat top teeth are used on blades made for ripping hard and soft woods. Since wood is much less likely to chip and splinter when it is being cut in the direction of the grain, the focus of a rip blade is to quickly and efficiently remove material. The flat top tooth is the most efficient design for cutting and raking material out of the cut.

Alternate Top Bevel (ATB) "Alternate top bevel" means that the saw blade teeth alternate between a right and left hand bevel. This tooth configuration gives a smoother cut when crosscutting natural woods and veneered plywood. The alternating beveled teeth form a knife-like edge on either side of the blade and make a cleaner cut than flat top teeth.

Combination Tooth (Comb.) The combination (4&1) configuration is used for "combination" blades -- blades designed to do both crosscutting and ripping. The teeth are arranged in groups of five - four ATB teeth and one FT -- with a large gullet in between the groups.

High Alternate Top Bevel (HiATB) The HiATB configuration is used for extra-fine crosscutting and to cut materials surfaced with melamine, which is prone to chipping. The high bevel angle increases the knife-like action at the edge of the blade.

Hook angle affects blade operation in important ways. A blade with high positive hook angle (+20 degrees is a high hook angle) will have a very aggressive cut and a fast feed rate. A low or negative hook angle will slow the feed rate and will also inhibit the blade's tendency to "climb" the material being cut. A blade for ripping lumber on a table saw will generally have a high hook angle, where an aggressive, fast cut is usually what you want. Radial arms saws and sliding compound miter saws, on the other hand, require a blade with a very low or negative hook angle, to inhibit overly fast feed rate, binding, and the blade's tendency to try to "climb" the material.

Kerf Width and Plate Thickness
The width of the "kerf" - the slot the blade cuts in the material - is another important consideration. Most obviously, the kerf width determines the amount of material that is expended in the cutting process. But kerf width isn't just a matter of economics. The size of the kerf is determined in part by the thickness of the blade plate, and a solid, reliable blade plate is one of the features of a good saw blade.

The laser-cut reeds in this Freud thin kerf blade are filled with a vibration dampening material to keep the blade running straight and smooth.

Thin Kerf Blades
A saw blade's teeth, of course, have to make a wide enough cut to allow the blade plate to pass through the kerf. And for the blade to operate smoothly and make a true cut without a lot of scoring on the edge of the cut, the blade plate has to be substantial enough to absorb vibration and to handle the heat generated during the cut. For full kerf saw blade, a kerf width of around 1/8' is standard. But for so called "underpowered" saws -- under 3 HP for a table saw -- a full 1/8' kerf has another effect: drawing too much power from the tool. If not enough power is delivered to the blade, the saw slows down causing excessive friction. The blade heats up and can become distorted or burn the cut surface.

Fortunately for woodworkers who don't own the most powerful industrial equipment -- and for those of us who just hate to watch expensive hardwood turn into piles of chips -- technological advances in blade design have generated "thin kerf" blades that rival the best industrial quality full kerf saw blades. Thin kerf saw blades are extremely helpful for underpowered saws for the simple reason that the blade has to cut through less material, and therefore doesn't have to work as hard as a blade with wider teeth. The best thin kerf blades employ laser cut dampening systems to inhibit vibration, and are made out of the best quality hardened steel to help them stay true in the face of high rotation speeds and stress generated in cutting.

The thicker, oversized Micro-Grain Titanium Carbide tips are an exclusive formula manufactured by Freud and designed specifically for each application

The Best Saw Blade Teeth
One of the most important things to look for in a saw blade is a good set of teeth. How long the blade will stay sharp, how clean it will cut, and how many re-sharpenings it will take all depend on the quality of the cutting tips. These days, carbide has just about replaced steel as the material for cutting tips of saw blade teeth. But not all carbide is created alike. On some of the best premium blades, the carbide is formulated specifically for the application of the blade. At minimum, look for a blade with C3 grade micro-grain carbide teeth, which are thick enough to allow a number or re-sharpenings. C4 carbide is the most durable grade for saw blade teeth, and is usually found only on premium blades.

A Quality Blade Plate
For a saw blade to make a true cut, the teeth must be held rigidly in line with one another. The blade plate needs to be as close to perfectly flat as possible, and it needs to stay that way during the cut. The blade plate should be made of quality, hardened steel. The arbor hole also needs to be sized and placed with extreme precision. The best blade manufacturers like Freud and Forrest laser cut their blade plates to insure that the blade will fit the saw's arbor precisely and the teeth will maintain as close to a perfectly consistent path through the material as possible.

The blade plate also has to be "tensioned" for it to remain straight and rigid when it comes up to speed. On a high quality blade, correct tensioning keeps the blade becoming "floppy" as result of the centrifugal force generated in operation. Blade Plates can also be treated to make their surface resistant to picking up resin and adhesives from the materials they cut. Many Freud LU series blades have a permanent red Teflon coating to reduce friction and help them resist corrosion and resin build up.

Reprinted with permission of Rockler Woodworking and Hardware.