Figuring out the source of discoloration on a beautiful figured cherry veneer. June 28, 2006

Question
I have successfully laminated 17 surfaces of curly cherry on four speaker enclosures using Titebond Cold Press Veneer PVA. With three surfaces to go, the 18th had black stains in one corner, say 15% of the surface area. It is in the picture. The one thing that I did differently with this panel was leave it under pressure for 18 hours. The others usually were pressed for 6 hours. I presume the stains are mildew from closed exposure to the water in the adhesive. But why on only one corner of the panel? I tried scraping it away with a cabinet scraper. Some of it comes off, but the three worst splotches look too deep to scrape entirely away. Are there any other methods of removing the mildew but retaining the colour in the veneer? Of course, all 20 panels on the speaker enclosures are matched. 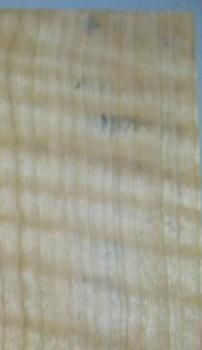 Forum Responses
(Veneer Forum)
From contributor K:
I'm not sure that mildew could grow without air. I'm wondering if there may have been some contact with steel stain. If that is possible, I would try the oxalic acid type wood bleach. It will remove the stain without bleaching the wood.


From the original questioner:
Thank you for the insight. I agree with your analysis that the stain is probably some kind of iron, tannin, water reaction. I am befuddled as to where the iron/steel could have come from. The veneer has not been sanded, of course. The platen was melamine. Surely it can't preexist in the veneer.

At any rate, I took a cabinet scraper to the veneer (what did I have to lose?) and I have been able to remove enough of the stains to make the panel usable without breaking through the cherry, so life is good again. Thanks for your help.


From John Van Brussel, forum technical advisor:
Most likely this is blue stain, which is caused by metal particles being oxidized by the veneer. It could be from steel strapping, the knife used in cutting, the dryer screens or any other metal object which contacted the veneer.

From contributor J:
I don't know how you can say that no air (oxygen) is present during any process. If there was no oxygen, nothing would set up properly. The source, although I agree that it probably isn't mildew or mold, could be any number of things. I don't believe you saw the marks prior to layup, so I'll discount ink or sticker or mineral (spalting marks) during harvesting. Sometimes lead in the tree from bullets will show up as these kinds of stains - you can see that not only is it in the spots, but is also incorporated in the figured grain, so that might have been in your veneer and you did not notice it until water was added. I have seen this many times before and I still haven't tracked down the source. If you're using a press to lay these veneers up, could be file shavings or contamination from that. If I were to guess, I'd say this is from when the tree was growing.

Did you make a mistake referring to this as curly cherry? It sure looks like figured maple to me! Maybe this cherry has Vitiligo!


From contributor A:
I get this problem with cherry and quilted maple. It is mold, and oxalic takes it away. Try letting the glue film over so it doesn't saturate veneer, or train a fan on the curing sandwich, or use glue with no water (polyurethane) - the best solution. More of a problem in higher humidity.

From contributor F:
The veneer is definitely curly cherry. I had never seen it so figured before, either, but I am new to veneer and have much to learn. But I do know cherry in its hardwood form.

Thank you all for the information. I did not realize contamination could occur from so many sources. It was a great education. I did manage to clean up the splotches and did not incur any others on the last two panels.

Here is a picture of one of the speakers with only the veneer finished so that you can see the curly cherry effects, although some of the colour of the aged cherry was scrubbed off during the finishing. The front baffle, with no drivers mounted, is fresh cut quartersawn cherry and hence has the pink colour instead of the cinnamon rusty brown of aged wood that has been exposed to light. 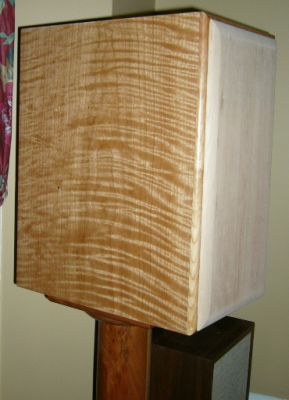