Controversy simmers over whether blue stain is is a special value, a visual defect, or a mold liability risk. September 17, 2008

Question
I just read a post on a woodturning forum; someone was looking for blue denim pine. I thought it couldn't be but found out it was. Blue denim pine is nothing but blue stained pine that the consumer has been convinced is wonderful and unusual. Where have I been? No more worrying about cutting pine in the summer here in VA – I’ll let it bluestain, call it something attractive and sell it for a premium. How about sticker stained pine being called jail house pine? Does anyone have any opinions?

Forum Responses
(Sawing and Drying Forum)
From contributor J:
That's funny, but I don't think it's entirely off-base. As a studio furniture maker I find blue stain interesting and appealing, despite the fact that sawyers and kiln operators consider it a defect. It's a defect because you can't sell a lot of it, not because you can't sell any of it.


From contributor L:
There is a small mill near where I live (12 employees) that specializes in wood siding and molding. The blue stained wood has been a big seller with them for years.

From the original questioner:
I have been reading about blue stain pine today. First of all most of the information seems to be associated with beetle infestation. Can I assume that blue stained pine without beetle damage is the same as blue stain with beetles?

On another forum someone brought up that blue stained pine is not allowed to be sold in England because of health hazards. Most of what I have read today says there is no health hazards associated with use in construction.

What about use in applications where there has been air drying only? I know boat builders do not use blue stained pine as it will rot quicker; at least the boat builders around here think so.


From contributor L:
A lot of my shop is built with blue standard pine, framing and paneling. The only property I'm aware of is the toughness property that blue fungus/stain messes with. The wood dents easier, as in more hammer dings. I have seen folks use blue pine for flooring and more high-heel marks, not a good choice.

I have heard of framers tearing a wall down as the customer finding out it was fungi/stain/bacteria, not sure which without looking it up. The non-woody folks freak out and don't want it, because it's bad. I'd build with it, but kind of like anything else know your customer.


From the original questioner:
Contributor L, some of our SYP floors have some stain. They are the 15" wide ones so I wasn't about to cut them down to get rid of the stain. I am not particularly worried about the use in flooring. I am just getting really curious if there is any scientific information that would discourage the use of blue pine in for instance turned bowls. I imagine if the wood was used in applications where it remained dry there would not be a problem.

From contributor A:
I have been working for years to market denim pine. It is selling well and cost more than plain pine. If bugs have been in it then I call it buck shot denim pine lumber and it too cost more. I have perfected my staining and get the very best effect in the lumber. It is harder than you think, so do not mess up a good thing.

From contributor V:
I've sold lots of blue stain pine and never had any negative feedback. It's often used as wall paneling and for furniture and bars. Some customers specifically request it and they probably know more than me. I personally like it and you cut and tight stack it for a week in summer and voila!

From the original questioner:
I have been sawing since 1985 and know about all the deviations from normal, at least for wood here in VA. Some I like, and some I don't.

From Gene Wengert, forum technical advisor:
The blue is caused by a fungus. As such, some people may have allergies to fungi and their spores. Have you heard of schools being closed due to fungi? Be warned.

From contributor W:
I understand that once the wood is dried the mold-fungus was not a problem . If you dry, shape and seal the wood is it still a health hazard? I sell and use large amounts so I would like to hear, because have never heard of a problem.

From Gene Wengert, forum technical advisor:
If it were simply necessary to dry out a school or home with mold, life would be easy. People are allergic to the spores of the fungi (simple explanation: the seeds) and these float around, etc. Drying does kill the fungi, but the spores are still there. On the other hand, spores are in the air around us. It is the concentration in a school or home that is most likely the issue. Some people are allergic to wood dust too. In fact, the dust of fungi infected wood is a real risk for many folks. I do not know if finishing the wood will reduce or eliminate the problem.

From contributor A:
Blue stain is a sap stain and is not mold. The SPIB does not count it as a defect and no strength loss. Mold grows on wood above 20% MC and thus the SPIB has set the standard for Kiln dried wood below 19%.

Spalted wood is moldy and where the color comes from and it does weaken the wood.
Blue stain pine is rare and hard to produce at a greater cost (this keeps the price up so do not let the cat out of the bag). Handle the market with care. Mold is a problem and a health risk. Blue stain is not mold and has no known health risk with it. It sure is pretty though. 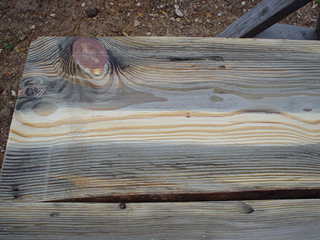 From contributor G:
Here in western Canada, the heart of beetle-killed pine country, the blue develops in the dead standing trees which split as they dry. Local lumberyards report higher costs in acquiring acceptable lumber from them. As an aside - I think the lowering of stumpage rates to allow harvesting un-infected wood before the beetles got to it was the root cause of the Softwood Lumber Dispute. 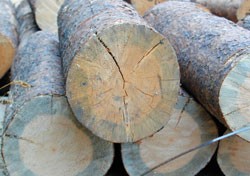 From Gene Wengert, forum technical advisor:
Blue stain is a fungi. So is decay, mold and mildew. People (some and not all) are indeed allergic to fungi spores and not just mold or mildew spores.

From the original questioner:
Actually it does matter. Blue stain is caused by a fungus (mold). It doesn't matter if the stain is caused by a beetle, stacking green boards together to encourage the fungus, pine logs cut in the summer and staining in the yard or in stacks of stickered pine. Once you kiln dry it there probably will be no problem as long as the wood stays dry. As Dr. Wengert said, the fungus is killed, the spoors are not.

I certainly would never sell it for boat building or repair because it will not last like non stained SYP. There are a lot of sawyers who read this forum who need to know that there might be a potential problem. Especially those who air dry wood. I would think that for furniture, flooring, etc. there would not be a problem.


From Gene Wengert, forum technical advisor:
What if someone puts up denim pine paneling (or whatever) and then they notice that they have allergy symptoms that they never had before. They have medical expense. They figure out that maybe it is the paneling they just installed (makes sense as they were fine before it was put up). A lawyer will help them contact you and let you know that you might be liable. (Do not blame the lawyer; this is the way the law is written. Change the law if you do not like it.) You might turn around and say "Why didn't someone tell me, especially that expert guy called the Wood Doctor?" So, know you have been told. You can certainly accept the risk, which is what just about everyone does, as the risk is so small. Incidentally, this issue is not related to improper or proper drying techniques.

From Gene Wengert, forum technical advisor:
To contributor W: just because fungi make antibiotics and mushrooms does not mean that spores are present. Indeed, some people are allergic to penicillin. Drug companies carry huge insurance policies just in case.

From contributor W:
I guess I’m dense. If you dry, plane, sand and seal the wood, where are the spores going to come from?

From Gene Wengert, forum technical advisor:
Planing and sanding will certainly release spores, but if the wood is sealed (sealed with respect to fungi spores so that they could not get past this finish) then I would not expect any problems. (Note: The earlier postings about this topic did not mention sealing the wood).

From contributor W:
I mentioned sealing in my first post. So any wood that has had mold or fungus on it may be a health hazard without being sealed. If so I have it covered.

Some folks are allergic to pine wood, eastern red cedar wood and some other types. I have a customer who is allergic to ERC pollen but can work the wood all week long. People who have mold problems in the home have an excess moisture problem in the home and mold is a result of it. Closed vent heating and ac systems just compound the problem.

Blue stain pine that has been kiln dried below 19% and has had the pitch set at 160 degrees is about as sterile as it gets. Now let air blow on it and water re-wet it then you have a new event not a recurrence of an old one. Putting a finish on it will help the wood from gaining moisture and keep mold spores out of the pores. But mold will grow on paint and some finishes. Mold will grow where there is enough moisture and the temp is right and there is some air. Spores are ever present any where the wind blows and all surfaces are coated with them. The wood is not the problem.

Now I would venture to guess that since I live in an area thick in forest and gets over 42 inches of rain a year that mold spores are everywhere. I would also guess that folks who move in here from a large city have a reaction to all the molds that they are not used to. But if it were not for all the fungus we would be neck deep in leaves and branches and have a very bad fire every few years. So all those spores are a good thing. Keep the wood dry and no problems. As for the spores, they are everywhere and there is nothing we can do about the wind.