Question
We are about to begin replacement of 18 to 20 casement sashes with water damage attributed to the type of hinge in the picture. I have talked with Anderson Windows about possible different options on hinging. No help there. Windows are 40 plus years old. Not feasible to replace entire units. I don't want to rebuild only to repeat the same problem. Any thoughts? 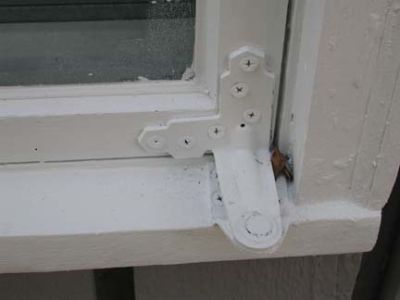 Forum Responses
(Architectural Woodworking Forum)
From contributor J:
There's more going on here than hinge replacement. Check out all the caulking where the wood meets the glass. When Anderson built these, they put the glass in a wood groove. Not a rabbet with some caulking. When the caulking gets old, the water gets in, sits in the groove, and the ponderosa pine rots. Anderson ponderosa pine sills have a bad track record, too. You're better off with Eastern white pine and aluminum storms. Companies like Anderson, and the US Dept. of Energy, don't count replacing windows you can't repair when they calculate energy efficiency.


From contributor F:
Is the damage caused by the hinge or the lack of proper weather strip? Hinges don't seal the mating parts, but a seal can surely be added.

From contributor D:
We use Whitco or Truth 3 or 4 bar hinges for the replacement sash our customers bring to us. Blaine Hardware sells Truth; Whitco sells their own.

The bar type hinges are totally concealed when closed, and throw the sash out from the casement when opened. Some have a hold open feature, some can be used with cranks.

The observations on windows - glazing, poor weatherstrip, sills, etc. are correct, and worse, American window manufacturers spend far more on damage control and mitigation than they do on quality research and development. And all that is outspent by marketing. We have a steady stream of 10 to 12 year old windows coming in for massive repair or replacement.


From contributor K:
I've taken on only two window jobs, and in both cases the jobs were for dead-on historical reproduction needs, paint and all. We do a great job on doors. Windows, though, aren't cost effective to make except under very special circumstances, and by T&M billing, as fortunately both my jobs were. I'd be interested to hear from anyone who has manufactured more than a few TDL/sash windows. For both projects of ours, I had to basically build by the seat of my pants relying on my ability to copy what I was recreating.

For starters, could you explain your process? Second, are real windows something you consider profitable? I'd like to market windows so that I could offer a complete door/window/trim package.

To the original questioner: A search for reproduction hardware might yield some good sources for you, but I have to agree with contributor J... There's definitely a lot more going on with this window. Likely, the least expensive route will be replacement. And so long as you clearly describe the old windows, you could offer them on eBay. You might be surprised what someone would pay for reclaimed architectural products!


From contributor M:
We build a lot of windows. They are all for very high-end homes, though. These are homes in the 4 million and up range. Most of our customers want an old world look. They aren't thinking about energy efficiency. Most of our custom windows have restoration glass and 3/4" muntin bars. The double hungs we build have pulleys and chains with counter weights. They are profitable because cost is not the biggest issue for these homeowners. For your average semi-custom home, it wouldn't be feasible.