Life insurance, performance bonds, and similar workarounds for the risk that you may check out unexpectedly. January 20, 2010

Question
My client is afraid I'll die. Well, maybe not die, but become incapacitated, and he's out his money and kitchen, being that I'm a one man shop and have no one to take over.

I know he can croak too, and I'm out. But I'm a big boy and deals get made all the time. I just need some creative wording to make this happen. A short term life insurance policy equal to kitchen cost? Instead of 50-40-10 payments, a pay as you go?

How have you guys handled this?


From contributor J:
Call your insurance company, have him pay for it. Maybe they could add on some insurance for a meteor strike, tornado, wild land fire, attacks from terrorists. Who knows? Anything could happen.

How old are you? Has something like this happened to him before? There was an article about Sam Maloof, who is very old, but in great shape. Customers ask him the same question as his lead time is way out there, and he's in his 90's (but he does have a crew of cabinet makers that are half his age, who will carry on).


From the original questioner:
I'm 63, but I'll be pissing on everyone's grave! I work out 5 days a week and run marathons. I look better than him. He just wants assurance he doesn't lose. I think this is secretly on every client's minds but they don't say it.


From contributor S:
A 6 month term policy for 50k would be peanuts. Get a quote, add it on as line item, and re-submit the quote. That is if you think he is serious. As in, he has a deposit check and signed contract and this is the only thing holding it up.

From contributor W:
I have had to do this. It is a performance bond. Call your insurer.

From contributor A:
Credit life insurance may be less than a performance bond and easier to write.

From contributor O:
Speaking of Sam Maloof, he unfortunately died yesterday. Nice guy, by the way. 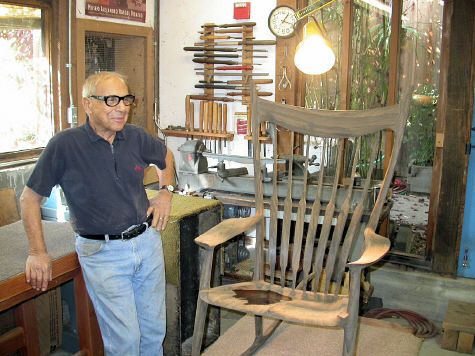 
From contributor G:
The province we work in (Alberta) requires you to have a performance bond to protect the consumer if you take deposits. We tell our customers that the deposit protects us and the bond protects them. The cost is not that bad and it gives your customers peace of mind.

From contributor J:
Sorry to hear that. Sam was someone I always wanted to meet. I remember Steve Kirby (Palomar Jr. C.) talking about him and the week or two he spent as a grad student watching him work many years ago. I'm sure his crew will carry on and build some of the best furniture in his spirit.

From contributor M:
Have him hire you as an employee. He can then take out a huge life insurance policy. So when you do die he can profit from your name. It would stun all of us if we knew how many companies take out "janitors benefits" on their employees. Apparently Wall Street is now funding its big bonuses with this method. Huge tax loophole, etc. (you die and it directly pays the CEO a million bucks).

From contributor P:
I had a client die on me in March when I was halfway through a furniture project. He was only in his 50's and in good health. Crashed into a tree and killed instantly. You never know when the ax will fall for anyone.

From contributor Z:
Sorry to read that about Maloof - he was a remarkable man who accomplished great things. He will be missed.

From contributor L:
What a great idea! Another cost to make life even more unaffordable... the fear of death.

From contributor X:
Does this make my "Maloof cutters" from Woodline a collector's item and now more valuable?

From contributor O:
Yeah, your Maloof rocker will also be more valuable. Sam made a comment related to this thread. He said that earlier in his life clients would ask him if they would get what they ordered before they died. He said about 5 years ago they started asking if they would get the items before he died. I suppose there are currently some disappointed customers.

From contributor H:
I had a client that had that concern and was considering going to home expo for the whole renovation. He finally decided to use my services for the cabinetry, as I am a specialist in Kosher kitchen design and they could not figure out how to design the kitchen properly. He did order all the appliances from them including the installation of them.

Kitchen turned out great. He is really happy, but in the meantime, Home Expo was closed by HD and several of the appliances have proved defective, the subzero fridge was a 24" model, but not an integrated one like he wanted, and the install took forever. The individual appliance companies are of course honoring their warrantees and HD is handling all the visits, but it has been a lot of aggravation for the client.

The only trade he has been 100% happy with has been me. Good thing I am alive to tell the tale.


From contributor Q:
If you already have a life insurance policy, you could probably draft a simple agreement that would name the client as a beneficiary (of sorts), with specific dollar amounts listed. It shouldn't cost much if anything to notarize it and file it at the courthouse. You would also be within your rights to be protected in the same manner.