When complicated pieces butt together, sometimes there is no alternative but tedious hand scribing and fitting. Best to avoid those situations by prior planning, if possible. October 12, 2007

Question
I recently completed two of these doorways. I framed a square opening to match the arch provided, installed jambs and trim, but then I had to fit these molding pieces to the corbels. The pieces were half roundish, about 1" thick, and 1 3/8" wide. It took a while, which makes me wonder if there is an easier way. I tried to align the corbel over the trim and eyeball a line. I then cut short of the line. I filed and test fit and filed and test fit. 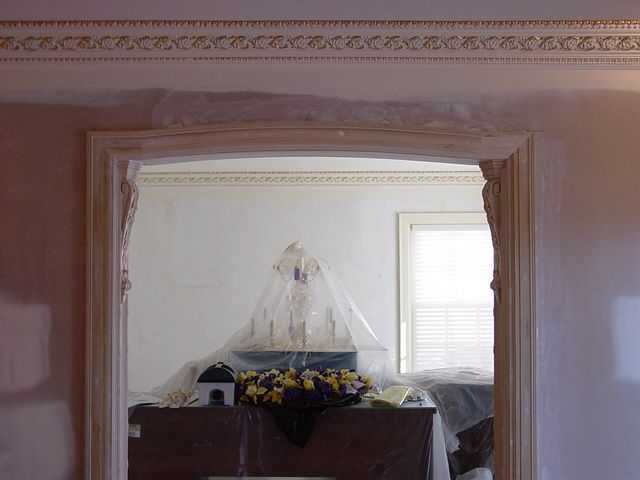 Here is the corbel. 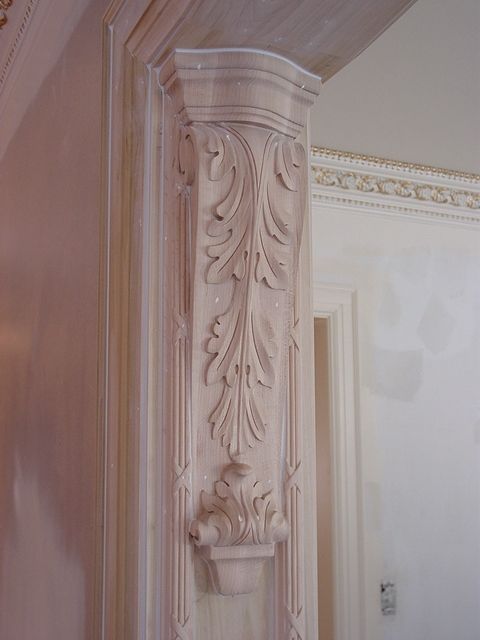 Forum Responses
(Cabinet and Millwork Installation Forum)
From Gary Katz, forum technical advisor:
Far out! Is that J.P. Weaver reed-and-ribbon molding? Or is it wood? I think you done good for what you had to do. Too bad the jamb wasn't wider, huh? Everything good - at least most everything good - happens in the planning stage, doesn't it? I mean, if you consider that most things that are bad happen at that point. :)

Is that jam on a radius (curved) wall?


From the original questioner:
It is wood. Maple. Enkeboll. Same with the corbels. I knew fitting the pieces like that would be difficult, but the designer insisted. That's when he said he was glad I was doing it. The designer has some carpentry experience, so he knew it could be done. The embellishments on the crown above are JP Weaver, though. I did have the opportunity to hang some of their plaster crown at this house for the first time, too. The jamb is not on a curved wall. It's the subtle curve in the head that makes it look that way.

To the point now. I was just wondering... If one is forced into having to scribe and fit irregularly shaped or highly profiled pieces to other pieces, is there a way to accurately mark and cut the pieces? I mean, other than filing and test fitting and filing and test fitting? It took me about 2.5 hours to fit and install what you see in the second picture. Times 4 sides is 10 hours. It seems like a lot of time. I didn't rush it, as I had only enough pieces for the job. Thanks for the response.


From contributor F:
I don't believe that there are any secret speed techniques when it comes to complicated scribing and fitting. I don't know how familiar you are with the techniques of scribing, but there may be information in the Knowledge Base here at WOODWEB. I read a great article once that was published in one of Fine Woodworking's publications all about scribing. Scribing is as old as the trade itself and there are many methods of marking for stock removal.

One basic fundament when using a pencil compass to mark for scribe is that the compass needs to be held as parallel as possible to the direction that the piece of scribed work needs to move. In other words, in the case of the corbel, the compass would be held as perfectly perpendicular to its vertical plane as possible while marking the casings.

I have to confess that like Gary, I can't really discern much by looking at those photos as far as exactly what you did. The photos are vague and it could all be mistaken for plaster work. Last tip, learn to use a coping saw and it will become one of your best friends when it comes to fitting things.


From Gary Katz, forum technical advisor:
The only thing I can think of that might save time is to make a flat template first, but then you'd be transferring a two-dimensional template to a three-dimensional molding. I think your way is the only way - the long, slow way.


From the original questioner:
Contributor F, I am quite familiar with scribing and the use of a coping saw, but this was an odd shaped molding that I had to cut to fit against the corbel. I had to fit the straight pieces to the sides of the corbel. You can see the piece start right at the bottom of the flat near the top of the corbel and go from nothing to full width at the bottom. I tried the coping saw, but since I couldn't scribe a dead accurate line, I thought it quicker to jigsaw what I knew was waste. No easy way to scribe this as far as I could tell. Thanks, though, for the info on scribing. The one thing I know for sure is that I don't know everything!

Gary, I did make a template of sorts out of thin cardboard and used that in addition to setting the corbel over the rounded molding to eyeball the best line. I wanted to make sure things were fitting before I fastened them. I jigsawed the waste, then filed and test fit. Sometimes I feel like I'm doing things the hard way, then I come to find out that there is no easy way. The 2.5 hours/corbel was the average of the 4 sides. I was starting to get faster as I went, but like some things I do, I felt as if I was moving in slow motion. Thanks for all the help.


From contributor F:
It's a fact we have all been in that type of situation where something has to be done right and there is no fast way to do it and still get it right. As Gary hinted, sometimes the best solution is to be found before you ever open your toolbox. Sometimes when I can see that the job will be a time consuming nightmare I go to the drawing board to find a faster way through a change of plan in the way of the millwork itself.

In your case, much like Gary's keystone problem, the solution may have been to use deeper jambs and then the casing could be modified to include a back band to carry the extra distance back to the wall.

Of course in that same vein is a more obvious solution of using a corbel that was the correct size in width for the cased opening's jamb depth. I understand that you had other parties involved. These sorts of problems are bound to occur when there are no detail drawings or calculations made in advance of ordering the millwork pieces. The designer was pretty sure the parts were correct!

I have helped out a few finish carpenters in my time when they came to an impasse doing some difficult project. The solution? Often all that is needed to figure it out are a few quick full scale drawings or sections on a scrap of floor paper or cardboard.


From the original questioner:
The bad thing is that the designer knew what the sizes of the pieces were, but insisted it be done this way. Maybe, because of my inexperience, I agreed to do it as is. Obviously, if I didn't realize it would take that long, I didn't charge enough. I didn't lose by any means, and I did learn many things, but I didn't make what I wanted. But because of this job and the help of you and Gary, I now know what I'm in for on something like this. So, next time I'll suggest a re-design or charge more appropriately. This job, with a little more thought, could have had a similar look (if that's what the homeowner wants) and be done quicker and cheaper (in labor time, never quality). I'm glad to now have the expert help of guys like you. Thanks.