Question
Is it possible and/or practical to cope embossed crown or one with dentil?

Forum Responses
(Cabinet and Millwork Installation Forum)
From contributor S:
Depends on the size and depth of detail. Generally a shallow detail doesn't get the full cope detail in my book, although I have had some pretty funky looking crown that has had to be coped, detail and all. The trick is to pay attention to the pattern and cut so that the pattern is split or matched (I generally save this for the outside corners and sacrifice on the inside corners). If the inside and outside corners are to be pattern matched, then you need to adjust in the long runs by cutting out sections at match (or near match) points.

The toughest crown that I ever did was a hand carved one with horses on it. Talk about being a nervous wreck! I had about three feet of extra stock before I even had a chance to make a sample cut for the miter angles. I took down all of the wall numbers and figured out where each inside and outside corner would hit on the stock before cutting. As luck would have it, there were like three places on each stick that could be cut (albeit bastard angles between scenes in the carvings). I had to mark every piece and number them and then shuffle them around and compare them to the walls before cutting. Ten foot sticks went up in as many as three or four sections shuffled around so that no carving had a saw cut through it. I tacked up the inside and outside corners and then filled in the runs using different angled scarf joints at almost every joint.

I sweated off ten pounds worrying about that job and when I was done I had two pieces about a foot long with carvings of horses on them. I 45ed the ends on the flat and put short returns on them. I was going to take them home as mementos, but the damn owner and contractor saw them and claimed them. I wouldn't mind the owner having them, but I know that the contractor is lying to everyone that sees his sample about what a great job "he" did on this crown. Some days a job well done just isn't enough!


From Gary Katz, forum technical advisor:
I don't cope dentil crown - not if the dentil detail is milled into the crown. If the dentil is separate (which most of the time it isn't, where I live), then you can cope the crown. Whenever the crown detail goes horizontal - like the bottom and top of a dentil block - it's extremely tough to cope. I'd say impossible... but someone would want to argue with me.

From contributor S:
No argument here. The little horizontal section at the bottom I just cut off square and butt it into the non-coped crown already on the wall.

It is kind of depressing when I can't get a pattern match on dentil moulded into the crown. I generally shoot for the outside corners to match and hide the mismatch at the inside corners, or if there is what I would call a feature wall or more important wall that has a fireplace or other high profile, attention grabbing feature, then I would match the inside corners on that wall and let the rest of the corners work themselves out as they fall.

Cupped crown is one of my biggest pet peeves. I installed some aluminum on a honeycombed cardboard backing that was some of the biggest garbage ever made.


From Gary Katz, forum technical advisor:
Yeah, that's what I've always done, too - get the outside corners just right, then let the inside corners fall where they do. But the problem is, when you cut the bottom horizontal piece off the dentil, you end up with a glaring hole if the corners are mismatched, and it's darned near impossible to match the corners. If you cut a miter, at least there's solid wood. But then, if the moldings shrink in the winter (east coast), you end up with a hole on a miter, too. 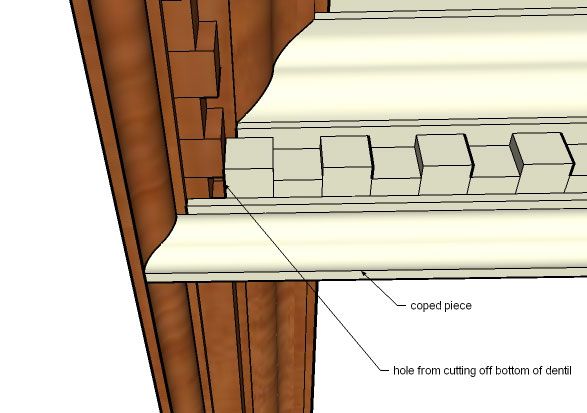 
From contributor L:
In a complete run of crown, there should only be one mismatched corner. Unless saving material is more important than the look of an uninterrupted pattern.

From contributor S:
I agree. But unless the architect draws the room to fit the crown, there are going to be issues.