Suggestions for a cabinetmaker getting into building his first corner sink base. January 13, 2009

Question
I’ve been doing this for quite a few years and this will be my first corner sink base. I think we’re leaning towards an inset base style and would like to use a full size sink. I can think of several ways to build a corner sink base, but I’m looking for the best way. Would you share your construction methods and especially how you do your stiles for the inset portion?

Forum Responses
(Cabinetmaking Forum)
From contributor J:
I've only done one corner sink on a face frame inset door cabinet and I actually built it a bit different. Instead of making a box which would have been huge (45" out from the corner) for the size we needed, I built the face frame and then assembled the interior on site. I installed the flanking cabinets and the face frame at the same time and then added a bottom panel and counter supports at the back afterward. It worked out well and I didn't have to build a monster sized box to do it. Here's a photo, as it may be easier to see it than explain it fully. 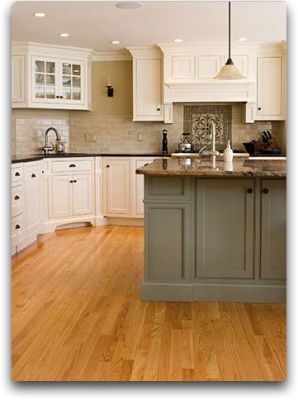 From the original questioner:
Thanks, and nice work. I thought about your method too, but I won't be doing the install, it's for a contractor. Yes, I was trying to avoid a huge corner base also and was hoping somebody had already addressed that.

From contributor M:
I've got one out on the shop floor right now - although it's still a pretty large corner base, it's nothing ridiculous. It's going to go in a corner with windows above on either side of the corner. Opposite corner has double ovens, which was much more difficult to do without making a "cluster*&%^." Ends were kept angled for tall pull-outs on both side walls (eliminating the homeowner's desire to put cheesy Lowe's organizers on the inside of the door).

Making the miters on the frame is important, and the easiest way I've found to transition. It causes a nice even flow between frames and installs essentially the same as the rest of the cabs.