How to deal with crown mouldings on cathedral ceilings and outside corners. September 25, 2001

Question
I'd like to know how to deal with sloped crown intersection. In an exterior application, this occurs when the crown that's running along the wall/soffit reaches the outside corner, and then heads up the gable side of the roof (sketch below). A similar situation can occur when installing crown in a room with a cathedral ceiling.

Can anyone explain how to handle the joint in this situation? 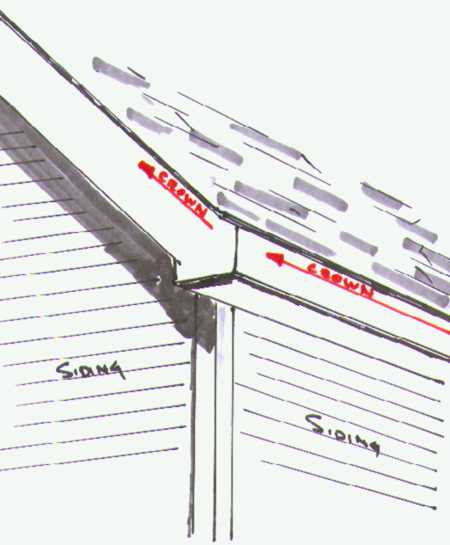 Forum Responses
From contributor J:
When I install crown in a room with cathedral ceilings, the moldings are at different angles to the walls. The backs of the moldings need to be planed off (or run them through the shaper and put a 60 degree bevel on both sides) because the molding at the lower part of the wall will be standing up straighter than the piece running up the angled ceiling. With a rake as steep as your drawing, that may not be acceptable--the steeper the pitch, the flatter the lower molding is against the wall.

Then I take two 2' pieces and make test cuts to find the angle, then cope or miter as usual. I've done this with a 3-piece crown as well as single crowns.


I don't believe there is any way to make a proper miter in this situation (please correct me if wrong). The outside corner miter for the crown on the rake will be longer than the miter on the facia board crown. Usually I try to come up with a design that will stop the intersection of the two moldings in this situation. One suggestion might be to run the crown on the facia board past the corner, return it around the pork chop, and return again to end at the back of the pork chop. (Pork chop being the triangular piece added to the bottom of the rake board to cover the soffit). The crown on the rake board could then sit on top of the facia crown with a level cut (or some variation of). Just curious--are there going to be gutters on the soffit/facia end? Many times crown is installed on the rakes only and run into the back of the gutter.

Traditional crown on a sloped ceiling is a design faux pas. But if I had to deal with this designer snafu, I would start with the sloped elevation first and then cope the horizontal elevation to it for the inside corners. As for the outside corners, I would approach them as compound miters, probably doing several test cuts to acquire the correct funky angle. Approaching a slope from a horizontal run on the same elevation is of course not a problematic area.

And if I had a choice, I would prefer to do some special effects or transitions, as long as we're getting stupid.

The drawing above illustrates that the facia and rake boards are of the same dimensions and the tail is cut off the rake--this is a good example of why it doesn't work. Also, it was already pointed out that the horizontal run gets flatter as the slope increases. All this makes for some bad-looking situations. I'm happy to state that I've never had to put up crown on such a slope.


How about a plinth on the front corner face at the bottom of the gable? Run both into the deco plinth. The alternate is a hell of a bunch of compound miter.

I answer based on an assumption that could be incorrect. I assumed a detail similar to a flute, etc on the faces. If there is no flute et al and no plinth, a simple 45 degree on the gable end should work.


I did a crown on a cathedral ceiling a while back. Cut the horizontal molding at a 45 degree angle just as if you were turning the corner flat. The cathedral molding is cut at a 45 degree as well and the compound angle is cut at the angle required to make the end line vertical. Can only be done on a compound miter saw! Example: If the cathedral/roof line is 20 degrees, the saw cut must be set at 20 degrees vertically and 45 degrees horizontally.

It took me several tries and I scratched my head bald!


From contributor D:
The answer is easier to execute than it is to describe, but I’ll give it a shot. For illustrative purposes, let’s assume we’re dealing with a 12-pitch roof and using solid crown.

Starting with the horizontal piece of crown, miter it on a 45 as you normally would in an “all horizontal” situation.

Take a small piece and miter it also on a 45 so it meets the first piece (for the moment, this small piece would run horizontally if it were installed right now).

Now take that small piece of crown and lay it on its BACK and cut it at 22 1/2 degrees. You’ll wind up with a triangular transition piece. The “top” of this piece will be at a point while the bottom of it will probably wind up an inch or so wide (depending on the overall size of the trim).

Nail this piece to the first one. Now the crown that will be applied to the gable can simply be mitered in at 22 1/2 degrees and it will meet the small transition piece perfectly.

The same solution applies to a cathedral ceiling except obviously for the bottom horizontal piece of crown, you would have to rip the back of the top of the trim to get it completely against the sloped ceiling.


From contributor J:
The above post reminded me that the 3 piece crown I installed did use a small triangle piece for the crown and the wall molding. The ceiling molding was always on the same plane, so it didn't need one.

On interiors, we cut the rake piece to butt into the wall, then determine the angle the wall piece needs to sit to be equal in width. Then back cut the crown and cope in. The amount of material taken off the wall piece to make it sit flat is substantial. Try with two small pieces on the bench, and you will see there is a point where the details cross. May not be the best for large profiles. I imagine with enough time this could be mitered also. 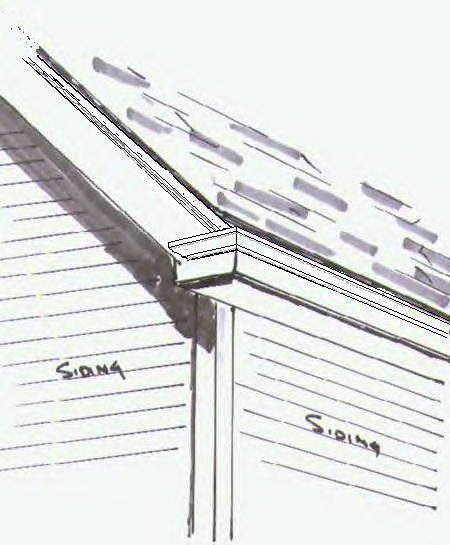 To contributor D: I don't think that cutting the miters in that fashion works going up the rake. If it was going down it would. If you cut upside down normally, when you got to the miter going up the rake you would have to flip the crown top up on the saw, which cuts away part of the original 45. I think I will be making some experimental cuts today for fun!

The following is reprinted with permission from www.compoundmiter.com.

How To Install Crown Molding on a Cathedral Ceiling 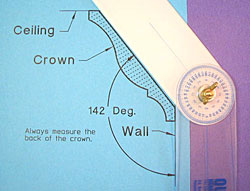 Before you make any cuts, check the crown moulding angle by doing the following:

Trace an outline of the crown molding on a piece of paper and take your True Angle Tool and measure as shown.

This is a standard 52/38 crown. Fifty-two degrees is the crown angle to use in the Compound Miter Chart, Crown Moulding Table or the Excel Miter Cut Program for joint "A". 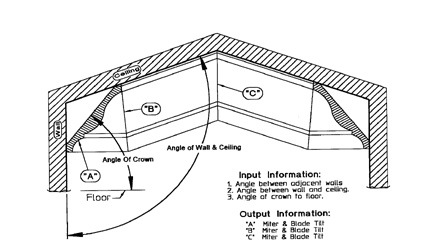 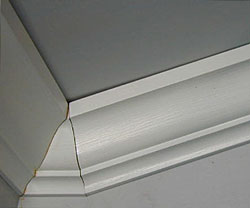 Take a close look at the above drawing. Joint "A" is a standard inside corner. The crown angle for joint "A" is 52 deg. (This is a horizontal turn of the crown molding)

Measure the angle between the adjacent walls in the corner with your True Angle Tool and, using the Compound Miter Chart, Crown Moulding Table or the Excel Program, determine the miter and blade tilt to cut the crown molding. 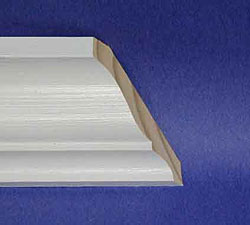 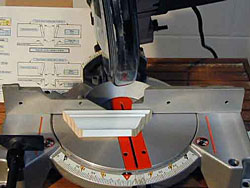 The right end of the crown is the good piece. This is the short piece that goes from joint "A" to joint "B". (I am now cutting the left-hand side of joint "B")

This is the left-hand piece that will go in the corner at joint "A".

You will always be able to see the saw cut and the pointed end will always be at the bottom of the crown molding. (Review Crown Molding page if you are having a problem here.)

Cut the mating right-hand piece that will go in the corner. This is the crown moulding that goes from joint "A" to "B".

Now this is where it gets a little tricky. Joint "B" is an outside corner. The crown turns up and continues on to joint "C".

The bottom of the crown is next to the fence and the top will be cut so it is 0 inches long. (Make a point) 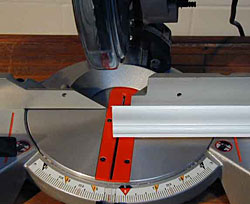 I am now cutting the right-hand piece of joint "B". Cut as shown using the above corner angle of 200 deg and crown angle of 38 deg.

Joint "C" is an inside corner vertical turn down. Use your True Angle® Tool and measure the angle that both ceilings make with each other. In our example, that corner angle is 140 deg. and the crown angle is, of course, 38 deg. (The complement angle is used for vertical turns.) From the Compound Miter Chart, Crown Moulding Table or the Excel Program, you can obtain the correct miter and blade tilt for this joint. Continue around the room until completed.

That's all there is to it! You now have the basics and can install crown molding in any room of your house that has a Cathedral Ceiling.

Reprinted with permission from www.compoundmiter.com.


The comments below were added after this Forum discussion was archived in the Knowledge Base (add your comment).

Comment from contributor A:
This is not an easy fix, but I thought it might be of interest. Several old carpentry books, a few old carpenters, and old buildings I've worked on, use moldings with two different profiles in this situation. The crown along the bottom is called the cornice molding, and the crown that runs up the gable end is called the rake molding. Using an orthographic projection of the mitered cornice profile,(usually a standard crown), you can determine the profile of the rake crown. It can also be done empirically by mitering the cornice molding, then holding a piece of solid stock mitered to butt against the cornice molding and tracing its profile onto the solid stock. This has worked well for small jobs where I can shape the rake molding on common shop machines, but a large job would necessitate having custom moldings milled. One note: these two molding profiles will only work on one given roof pitch.


Comment from contributor B:
Regarding the cathedral to level crown moulding, use two different widths of crown with similar profiles. Narrow for the pitch and wider on the level. Ssome sculpting with sand paper my be required, but this way you will get a 45 degree corner.