More fun with wood moisture: Figuring out why some supposedly kiln-dried cedar boards cupped and bowed after being resawn and planed. January 26, 2008 UPLOADED_FILE>

Question
Hopefully someone can explain to me why these boards have moved so much. These were three different 11' long by 8" wide 5/4 boards that I planed down to 3/4" thick. I stood them up against the wall for about a week. Yesterday (they were still flat and straight) we ripped them down to 6.25" wide and cut them to 5' long. All six boards you see here have cupped, and three have also bowed pretty badly. Was this all caused by relieving the internal stresses when we ripped them down? I thought this stock was some of the most stable wood you could ever use. Like I said, these were three different boards, but all behaved the same way. 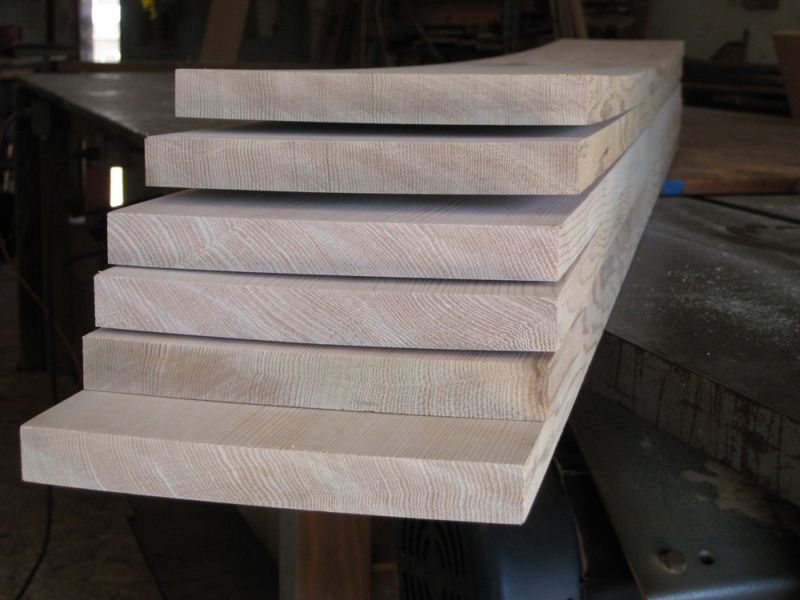 Forum Responses
(Architectural Woodworking Forum)
From contributor D:
Did you flip them as you planed them?


From the original questioner:
Well, I did plane both sides, and probably planed down one side more than the other, but like I said, they were flat for a week after planing.

From contributor D:
Maybe someone moved them and stacked them against a hot wall (sunny side) or stacked them without stickers and the weather changed. Try flipping them over and let them sit.

From contributor L:
Did it rain recently? Maybe the temp or humidity changed. Did the boards sit there like you are showing them? If it were me I would flip the boards over and let them sit for 24 hours.

From contributor B:
This won't help you now, but in the future I would cut the 11' stock in half and joint and plane to a 1/4" over final thickness, i.e. 1", before drying for a week. I would also sticker the pieces flat versus leaning against the wall. All the final jointing, ripping, and planing I would time as close as possible to final use.

You will need to know the MC before you worked the wood, and MC after. I think you will find that the difference between the two explains the movement. As for now, you can sticker the wood and let it reach EMC and hope for the best. Unless it is really wet, weighting the stack, over-bending, or other attempts at flattening will be futile.


From contributor H:
I think the key to this is how they were stacked after being ripped and cut to length. When the boards were up against the wall, air could probably get to the boards from all sides. Once cut and set on a bench, air only got to the exposed side. This can easily cause moisture penetration on the exposed side, while the moisture level on the unexposed side remained constant.


From contributor V:
I think contributor B is onto it. In thinking about wood movement, I mentally use a sponge - the synthetic type. As it sits on a counter and dries out, the sides that are exposed to air dry first, and shrink, cupping the sponge. Turn it over and it first will mostly flatten out, then cup up the reverse of the first. If the sponge is set so air can get to all sides equally, it will go back to its manufactured normal shape. Once all the moisture is out of the sponge (relative to the environment it is in), the sponge stops moving. Throw a little water on it and you'll see it move as it adapts to the new level of moisture.

When wood is properly kiln dried, it sets the cells in a position that they will stay as long as the MC doesn't change too much. Add enough water (or steam as for steam bending) and the cells will get more plastic once again, then retain that shape when dried again.


From Professor Gene Wengert, Sawing and Drying Forum technical advisor:
The defect that you have in this lumber is called bowing. It is caused because one side of the lumber has shrunk more than the other. With VG material of any species, such bowing is the result of one side being drier than the other. (Sometimes, but rarely, the warp can be caused by stress in the wood that is unbalanced because one side was planed more than the other side. However, such a defect will show up immediately when the lumber is planed.)

Note that the lumber is not affected by how it is stacked or leaned against a wall, or if it is stacked flat with or without support along its length. Lumber does not bend permanently that easily.

However, if when it is stacked, there is different humidity on one face versus the other, then there will be different moisture content and that can lead to warping. In this case, the good news is that unless the moisture change was real severe, the pieces will flatten when the MC gradients are eliminated.

If the lumber was not fully KD, then uneven planing can expose a wetter core on one face and that can also cause warping, due again to the moisture difference.


From the original questioner:
Thanks for the ideas as to why these are moving so much, but to tell you the truth, I really don't know why these did what they did. I had them planed to final thickness for over a week. When I stacked them (after ripping), one was on top of the other, so only it received more (or less) moisture, and not the ones in the middle of the stack, and all this movement was only after cutting and ripping to length.

To add to the confusion, check out this plainsawn board sitting in the same shop (for over 6 months) with the same conditions. Almost perfectly flat still. It has been very overcast in the mornings (lots of moisture in the air), but by 11 or so it's all burned off. 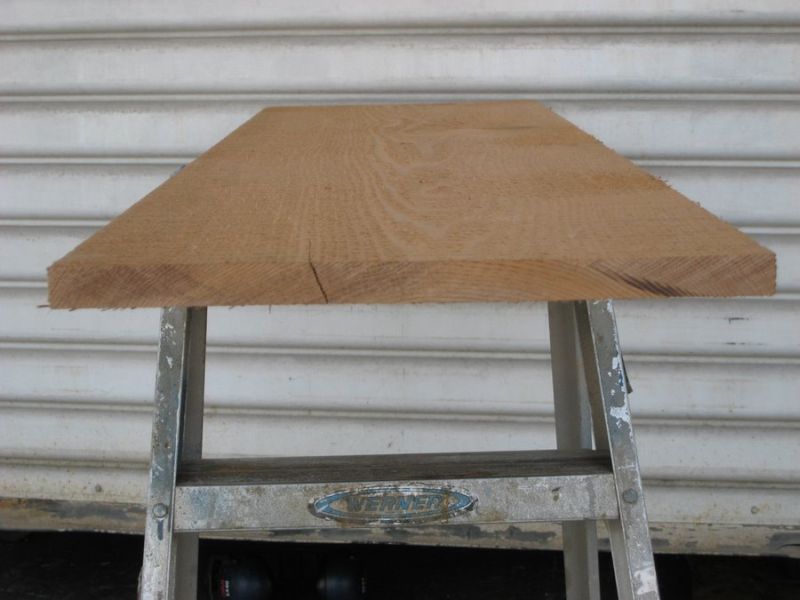 
From contributor J:
You said the VG cedar was KD, but did you actually check it? We use a lot of VG fir and had an experience with VG cedar similar to yours last year. We find this material usually comes in at 12 to 15% MC even though it is supposed to be KD. The 5 and 8/4 is always wetter. We usually try to dry the material down in a hot room before milling. That is a pain, takes a couple weeks, and doesn’t always get as dry as it should. We are working on putting a small dry kiln in our operation just to counter this problem.
Your pictures show nice old growth tight ring material that you would think would be stable. Usually with VG fir a small percentage of the timber will go wild after ripping. Even the tight ring stuff. I think some of these boards might have the stress Gene is talking about.

Another factor is VG cedar and fir in 5/4 and 4/4 are sometimes resawn out of thicker material at the mill and might already be wetter on one face. I don’t know the answer and maybe comparing fir to cedar is not valid, but we have had our share of problems with this material and it is always related to moisture. Your marine layer in San Diego is about the opposite environment of our dry Colorado. It seems like a little higher MC of the material would not be the problem it is here.