Custom Handrailing for an Awkward Winder

How do you make a good-looking and practical handrail for a stair winder that looks awkward and doesn't meet code? Here, top craftsmen take their best shot at solving the problem. February 15, 2015

Question (WOODWEB Member) :
I am making the newel and balusters for a custom handrailing but would like to get some opinions on a graceful beginning for this stairway. The newel will be over the post. The challenge, obviously, is to transition up quickly without a second newel. 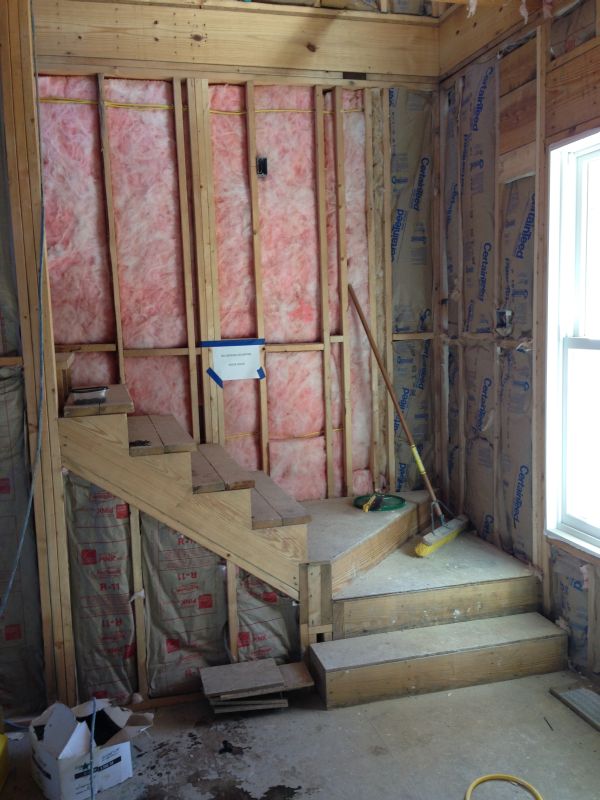 Forum Responses
(Architectural Woodworking Forum)
From Contributor O:
The stair part manufacturers have a wide selection of stock fittings that include up easings, caps, turnouts, and volutes that are typically what is used to rail a starting newel. One nice custom variation is to turn a cap for the newel that is the same profile as the rail (and sub rail in the photo), make an up easing and terminate it into the cap. One photo is the start newels, and the other is a landing newel with the profiled cap and the level rail entering and exiting, then mitering to an easing and down the run of stairs. 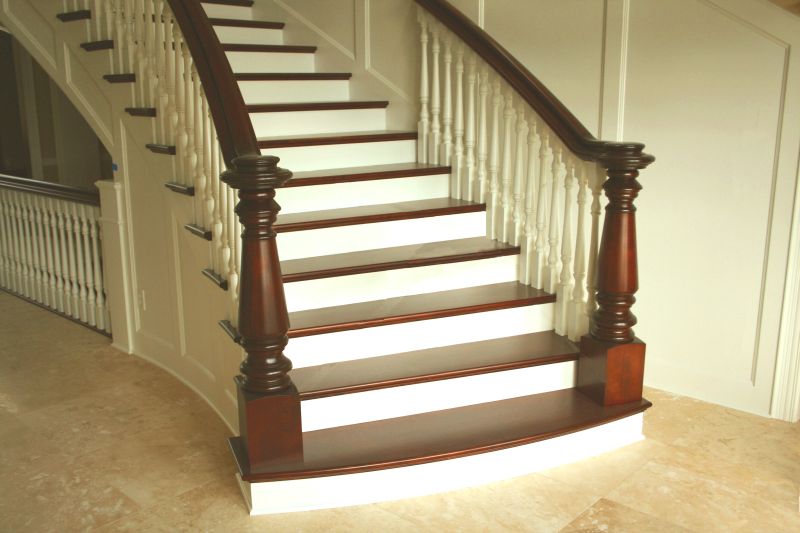 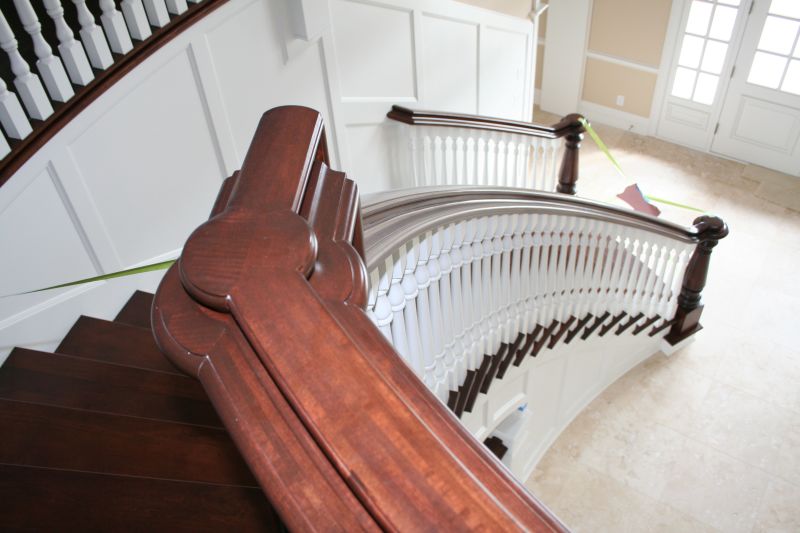 
From the original questioner:
So the challenge is transitioning up very quickly without looking clunky. Beautiful stairways Contributor O.

From Contributor G:
First you need to extend the bottom tread four inches to the left so when you put a newel on the bottom tread the rail stays over the steps. The rail coming down the stairs would be cut into an easing and then a manufactured 90 degree elbow. After you turn the corner the rail would take a straight down drop then a short piece of rail into an easing that is connected to the end cap that goes over the top of the post.

From contributor K:
First thing to consider is that stair will never pass code. Next, if you want something which will not appear "clunky" then stock parts will not suffice. What you need is not just a stairbuilder but a handrailer.

From Contributor G:
How do you propose doing this rail? Code says: Graspable rail (wrap your thumb around the rail) so you don't have to remove your hand to grab a new section of rail. Railing height between 34 and 38 inches. Four inch sphere can't path between the balusters. The only thing that may not pass is the two step drop in the rail. Code also says no rail is required on two stairs or less. So you could put the newel on the bottom tread before the landing.

From the original questioner:
I've been assured that the stairway will not have to pass code and not to consider that. I will recommend a handrail person but short of that they are considering a tall newel on the first step with a 90 degree turnout but this look, I think, would be overwhelmingly dominated by the tall newel. A second possibility is I think what Contributor G was suggesting: make a 90 degree turn with an elongated gooseneck down to an easing over the newel. Short of a custom handrail this would probably be best.

From Contributor O:
Every professional tradesman has a responsibility - or should have - to be aware of code compliance and deliver work within codes if needed. Code is not just code - it is driven from common sense and good practice. A stairbuilder - or handrailer - has a responsibility to the users to make the best and safest stairs they can or to walk away if what is required is out of bounds. It is all voluntary for the individual to choose how and why he does what he does. None of that involves hubris or arrogance, nor does the discussion of same.

Without intentionally insulting anyone, the stairs as shown illustrate the poor level of understanding of stair construction. Just because they have been built a certain way does not mean they should be built that way or can be railed effectively. The stairs show no understanding of good stair design - not at all unusual in today's low skilled, design deficient marketplace. My guess is that the original poster did not build the stairs, but is now tasked with the job of making them look good and work well. That may not be possible.

Once upon a time, this younger stair maker was asked to look at building a curved stair of about 90 degrees, about 14' rise, with adequate room for code compliant run - to go into a small commercial space. The owner requested a stair "like they would have at Harvard Law School" and to include two huge starting steps, each wide enough to have two rows of people standing upon the treads. It turns out this guy is an attorney, and he wanted the stairs to display his staff for his Yellow Pages cover ad for his law firm. It also came out that his budget was about 1/10th of what it might take to get anything even distantly related to what he wanted. I mentioned that the stairs would not pass code, and he smiled and said he would not have a problem with that. I did not go any further with him (hubris and arrogance). They did get the stairs made - without the large start treads - by a maker a state or two away, and they bounced so bad that I hear they tried to sue him, and never made a final payment. They looked nothing like anything at Harvard - more like the lowest bidder.


From Contributor B:
This is what I like to do. In your case the volute would make a looping descent down three risers. I don't think there's anything prettier but not exactly cheap. This is the kind of sculptural thing I believe Contributor K is referring to. Any other approach using standard parts and multiple newel posts etc., is going to look a bit like plumbing. Contributor O - very beautiful stair and handrail! 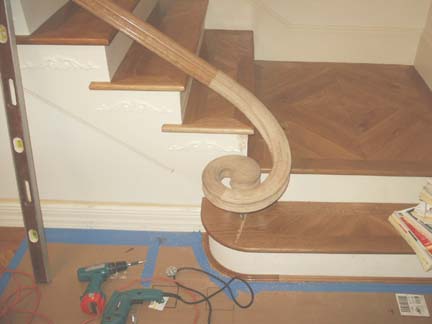 
From the original questioner:
Fortunately this is not my job. I am only producing the turnings. The customer has asked me to make some suggestions as to what would look the best. Contributor B, well done volute but I'm not sure how that would work given the significant drop in rail height.

From Contributor G:
The value is beautiful. Have you determined your post height on the bottom tread? Without gooseneck drop the post will be close to five feet tall because you have to make up the rise between the first step and the landing and the rise from the landing to the first tread. The stairs in the original picture have a winder stair on the landing and you would have to make up that rise as well on your post that goes on the bottom tread making the post seven feet tall off the floor. That would be odd.

From the original questioner:
I've modeled one possibility with standard parts. It seems to me even with a custom rail you'd be stuck with making a hard 90 and a long drop before easing into the newel. There is a definite gap in the balusters. 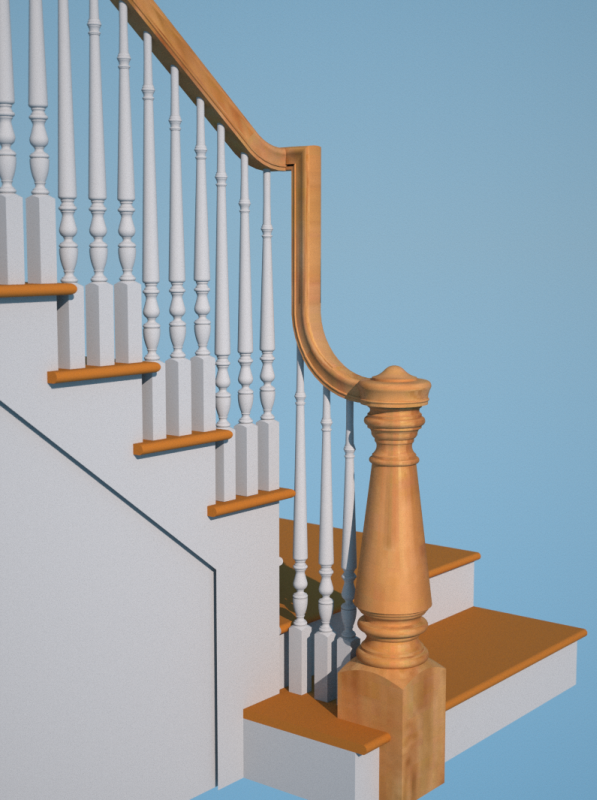 From Contributor G:
Type-o: The first baluster on the first tread before landing in line with balusters after the landing.

From the original questioner:
You’re right. I didn't realize I should have put the plane of the lower balusters in line with the last baluster before the landing. 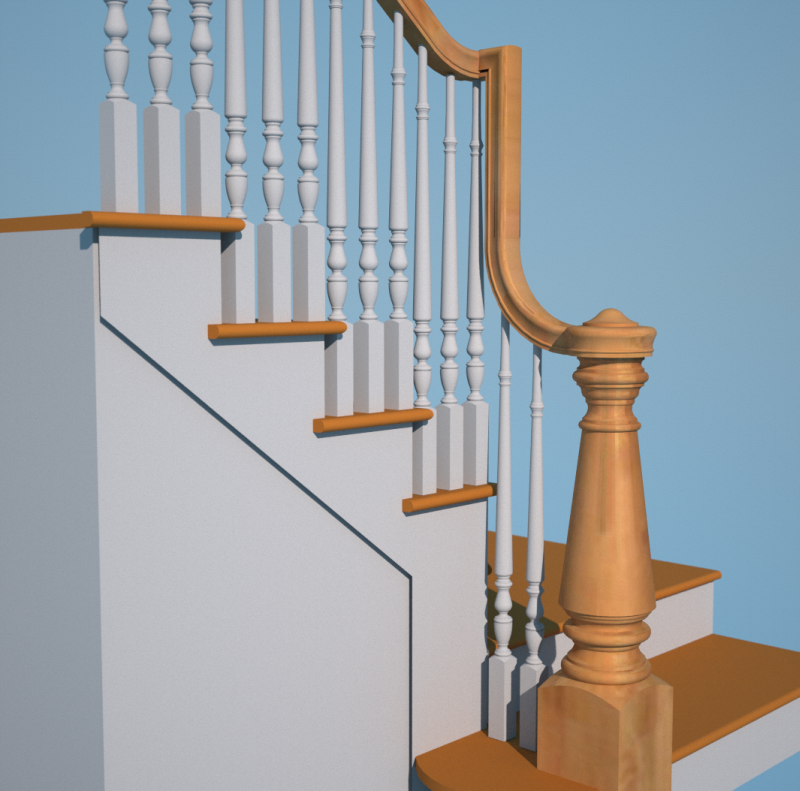 
From contributor C:
To the original questioner: Nice rendering. What software are you using?

From contributor K:
The IRC codes for stairs are generally followed throughout the country, so frequently the codes in NH are the same as in AZ, at least in the major metropolitan areas. As to how and why codes change they are sometimes driven by common sense and safety and other times it is by special interest groups, which I've been given to understand is the case behind the 42" guard rail.

From the original questioner:
Thanks for the input. The software is Google Sketchup with Maxwell rendering.

From Contributor O:
To contributor C: I welcome and appreciate your opinions. While the proposed 42" rule is new to me (and seems to violate common sense), I was told that earlier stairs were built with no code in mind beyond common sense, and what an insurance man would look for. The first curved stair I built, I was told that insurance people wanted every rise and run to within a range of 1/8", but my employer wanted 1/16". I have had customers say they only needed one spindle per tread "if that will save money" despite the fact that anyone could fall through the spacings. I walked away from that stair job because those lawyers wanted me to violate code and they were the kind of people that would go to court to sue me once I built it the way they wanted. No deep principles there. We all draw the line where we like or need to - most likely a portable line depending upon feast or famine. I have found that if I take some work out of my line, I often miss out on a nicer opportunity while doing the less desirable project.

From Contributor B:
I found this old picture in my shoe box. To be honest, I'm not sure that I like it, but you get the idea. 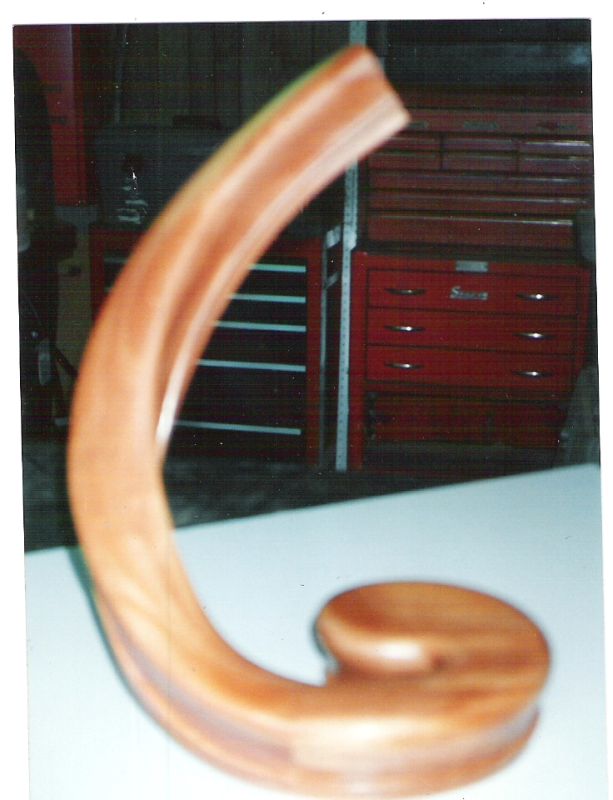