Woodwork installers consider a special case where a craftsman has to complete designer stairs on site, when the rough framing is already in place. August 11, 2009

Question
How would you build this staircase? There are already sawtooth gluelam stringers, rough treads and risers installed on the potential site (framing inspection already passed). Should I propose to tear them out and just get engineering to stack hardwood boxes? Construction - splined miters? 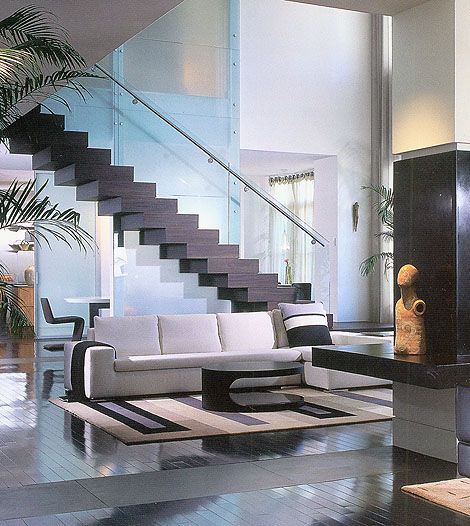 Forum Responses
(Architectural Woodworking Forum)
From contributor Q:
It looks to me that you would have the best luck if you got a steel fabricator involved for the stringers and just bolted/glued blocking in place. Then simply glue/nail the finish material on the sub frame. Seems this would be the strong and sturdy way to go. What is the finish material, by the way?


From contributor B:
I assume the homeowner has shown you the picture attached, and this is what they now want? Unless the glulam adjacent to the wall is unusually large, I doubt it can take the torsion that would result when you remove the outer stringer to achieve the desired look. Maybe you can come up with some boxes that allow you to keep both stringers and get close to the look in the picture, but realistically it seems the existing needs to go. Once removed you can embed the proper steel assembly within the wall with steel tabs protruding from the wall for each of the treads.

From contributor M:
The width of the stringer doesn't appear to be any narrower in width than normal. If they are well done, meaning accurate, use the existing stringers and create false backs to create the box look by wrapping the risers around. The tricky part is mitering all the corners. In the picture there appears to be something going on at the tread and riser joint, just can't tell what.

From contributor B:
If you're anywhere near CA, you'll need an outer handrail and balusters, unless there is one there that can't be seen. Designer homes must not need to pass final inspection, or they get heavily modified once the inspector leaves.

From contributor C:
Appears to me if you have typical framing you can extend your risers (assume 1x8), box the sides, box the back, and just stack them. From the picture it appears that the side is just a series of 1x8's in a box configuration. It seems you can see a seam.

It actually looks thick enough from the side that it appears like two stringers lined up back to back. The simplest way may to be just to build another set of stringers upside down under the set you have. Just line the risers up so they are square and trim/box out.

I would also make sure they don't anticipate getting glass on the outer edge. Looks like that is what is in the picture in place of typical rail. If so you would need to increase bracing, I'm sure.


From contributor L:
Looks to me like building onto the existing rough framing is the easiest. That's what I would do. What's the actual tread material?

One thing you can count on is the rough stringer doesn't have the correct rises. Run a story pole. Correct the rise and the rest is just cutting and fitting. No big deal.

I did a stair with a similar look. Yes, it was difficult to get the miters lined up with the actual rise and run. But if it was easy, they wouldn't need us!


From the original questioner:
The designer is leaning towards walnut. I should have also included that the staircase in question has an intermediate landing dividing the rise in half, so the stringers don't span as far as the photo. The stringers are already saw-toothed on both sides and are ready to be wrapped. I'm just wondering if it would be easier to start from scratch and build hardwood boxes and stack them. I can foresee a lot of difficulty trying to wrap it piece by piece and get all joints and seams tight. Yes, they want glass rail like shown in the photo.

From contributor L:
I'm uploading two photos; the first is how I found the stair. The good news for you is that you're working with wood and not steel. The various designers and engineers did all the layout with a GPS, if you can imagine. (It was great fun showing them how to use a story pole to correct the utter mess they'd made of this stair.)

I had an overall correction of something like 2" for the rise and about half of that for the run. I took the largest variation and worked backwards from there. 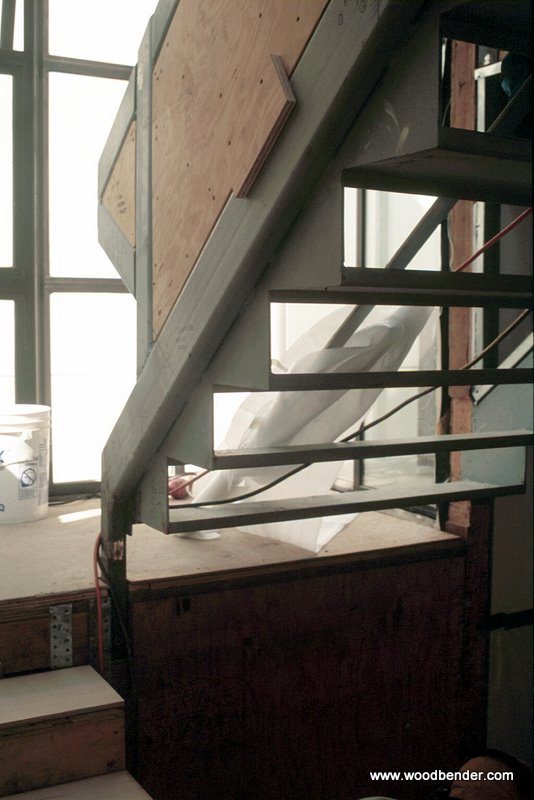 This is the finished stair. I took into account the largest variation in all directions, allowing a small (1/4" + -) gap between the steel and wood at the narrowest point and blocking out to my panels shimming as needed.

Make some careful patterns, don't plan to standardize anything about the stair, plan to spend a lot of time figuring out the maximum error in all directions, then work backwards. Just dwell on how cool the finished stair will look in your brag book. 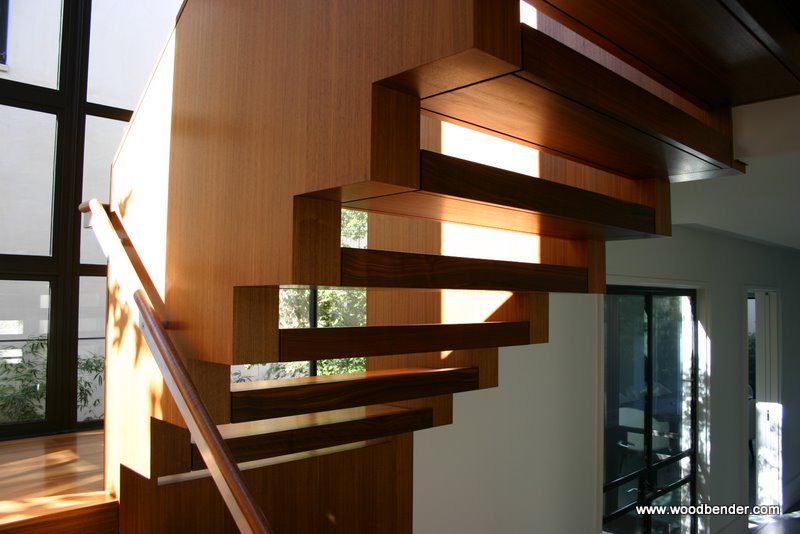 
From contributor J:
It's almost always easier to start from scratch. The worst job site experiences I've ever had have been those that involved over-laying someone else's fiasco.

From reading contributor L's descriptions of the various severe screw-ups that existed on the steel structure, I would think that he really would have preferred to start with a clean slate? By the way, interesting stair... Too bad the whole thing is built upside down (try turning the picture over and tell me what you think?). Just kidding, modern architecture is an acquired taste and I just don't get it. I don't care for those stacked black boxes either, but who asked me?

Anyway, I think it would be best to design and build it your way, from start to finish and don't forget to charge them to demo and haul away the other guy's thing. Also consider the fact that the finished stairway is a structural component that you will be liable for. This may be your best reason yet to start from scratch. A little professional structural engineering might also be a good idea here.


From contributor T:
One thing that has not been mentioned yet is that if you do end up rebuilding the stringers out of wood, do not use framing lumber! Way too wet and will distort and shrink a lot. I haven't done anything that exotic (the stairs in question - although I did help contributor L finish the stairs that he has shown you - the pictures do not do the real thing justice!), but I've done enough re-dos and rebuilds that I now routinely cut my own new plywood stringers and scab onto existing. I use a good quality 3/4" exterior grade plywood, should be fairly flat and smooth. Cut my master with corrected rise/run dimensions, taking some extra time for an accurate layout - crisp lines are critical. Once my master is done, I trace and overcut the remaining stringers, then temp screw onto master and use router/flush trim setup to duplicate the rest. I normally use a 3 piece glue up for the outer stringers and 2 piece on either side of middle stringer. During glue up, put opposing bows together to help flatten things out. Yeah, it's a bit of work, but after that, everything else goes in like clockwork. There's a good article in Tauton's "For Pros by Pros - Building Stairs" book about using plywood for stringers instead of regular lumber and two other good articles about cantilevered stairs that might help you out.

From contributor L:
I have to stick with my recommendation to use the existing framing as long as you charge for making it right. Just my opinion.

Contributor J, really, there is a world of stairs out there that doesn't have a single turned post! I know for you, it's heresy to say so, but some of them are even cool!

Since my friend contributor M is out of the closet, I can say I've never met a finer craftsman.

All that said, the questioner's challenge is getting the thing to work and getting paid for it. No matter how you approach it, it's going to be a bear. The contemporary designs I've done are much more difficult to pull off than the traditional rail and balusters. Hopefully the homeowner is understanding and able to afford you.


From contributor R:
There is an old fashioned set of stairs at the museum at Lexington-Concord that is constructed with the illusion of stacked boxes. I believe it was built in the 19th century. Each box is all paneled and tread wraps around, completing the look.

The look is created using traditional stair stringers and just wrapping your riser and nosing around to create the stacked box look. With that long of a run I would definitely put some sort of structural stiffener in there or they are going to be a bit springy on the outside, as all you have after cutting the profile from the stringer is maybe the equivalent of a 2x6 for support.

You will definitely have to do something about the rail as well, as there is no way that I know of to have a piece of glass support 200 lbs of lateral sway as stated in the code book. Looks great, but architects and designers seem to think the laws of nature bow to their superior design capabilities.

Chortle, chortle on the GPS! At least they could get the stair within 100' of the plot if they had a good one! Just when you think you have heard everything...


From contributor A:
Just a couple of things to think about... If the glue-lam has already been inspected and passed (I am assuming in rough-in/framing inspection), what are the consequences of removing that (re-inspection, possible alterations of other structural members that the inside stringer is attached to)? The other issue is that in the stacked box scenario you mention, you will lack a continuous structural member on the outside of the stair run. The number of joints (depending on the rise) could be a major issue for structural stability. Also, with a landing breaking up the rise, is the landing supported by the stair system, or does it have cantilever support or posts of some kind? I think either wrap what is there, take your time to correct the mistakes, and charge for all of it, or seek the assistance of a structural engineer.