Hewing a pentagon-shaped ridge beam on a Wood-Mizer. October 9, 2002

Q.
Can anyone give me advice on how to cut a 5-sided ridge beam timber on my Wood-Mizer? I don't currently know the angles needed but should have all the details later today.

Forum Responses
From contributor A:
It is not hard. If they want a pentagon, just cut some 18 degree wedges. When you get a flat side, put it down with a wedge under it and make the next cut. Turn the wedge 180 under the first cut and cut again. Now when you put the last two cuts down they will be at the angles and you can make the last two cuts. You then can turn the cant and trim down to the size you want.

If it is a ridge beam with a top like a house, make a rectangle, say a 6x10 beam first. Then mark the center at 3 inches and take a speed square and mark the angle with a felt marker. Then clamp that angle up, level with the deck and run your blade up till you get them to line up. Watch your clamp and back dogs and keep them below the blade. It is not as hard as a pentagon. Charge a tad extra as it will take a bit more time. Hydraulics make this go easier, as they can adjust the cant.


From the original questioner:
Shouldn't I try to cut a block like the one shown in the drawing below? 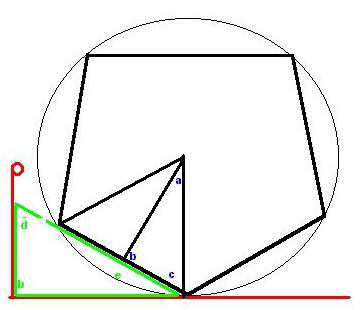 From contributor A:
Glad that you got the right angle for a Pentagon as 36 and not 18 degrees. Now can you make an image for the top of the ridge where the bottom has 90 degrees and the top has 22.5 degrees. It can be cut the same with wedges or by drawing lines and cutting if you just have one.

For ridge beams, I cut four wedges at desired pitch cut. Two go under the beam and the other two go against an auxiliary fence (2x6) to make clamping easier. Do one cut and then flip the wedges over for the other side. Mark the face for accuracy. Never seen a true pentagon used for a ridge beam. It would be rough on the framers.

From contributor A:
Pentagon was for a post. He just asked for a 5 sided and I was not sure what he wanted. Most ridge beams are 90 degrees on bottom and roof angle/pitch on top. But it can be done if someone wants it. Octagons are easy and make nice posts.

From the original questioner:
The timber framer gave me the specs. (Yes, it is a ridge, not a post.) They are 10/12 roof pitch, with 8" face for roof, 7" faces for rafters, and 3" for bottom. As mentioned, the angle from the 8" face to the 7" face is 90 degrees. So the pentagon should look like this: 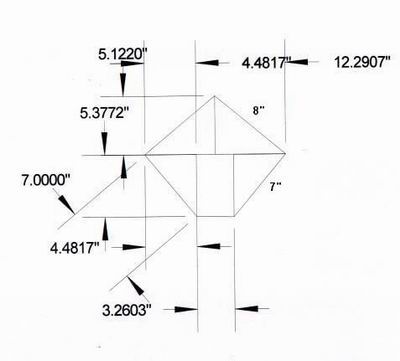 I asked some designers next door about how to figure the volume of a pentagon so I could figure out the board feet in one. They said to calculate the volume in each triangle by doing the area x the length and add them all together to get the total (and the rectangle in the middle also). And as mentioned, add some extra for making these blocks and extra cutting and rolling time.


Charge by the hour for figuring and cutting. You also might want to ask the framer what it's worth to him. Puts things in perspective when he realizes how valuable your services are to him.

From the original questioner:
I'll be adding in some extra for all the figuring, for sure. I've cut a full size sample of the end profile from a 1" board to ensure the correct layouts are understood (by me). And using this and some math (trigonometry), I've figured out my angles and which set of spacer blocks I'll need in order to cut this timber, as well as the cutting order of the 5 sides.