Question
Does anyone have experience setting up a hand tool to cut dados in sawn logs? I don't think I have the clearance to put a dado blade in my 7.25 worm drive. I don't have the money for any kind of a through-feed machine.

Forum Responses
(Sawing and Drying Forum)
You could set up a router to cut a dado.


Makita makes a groove cutter and Log Master makes an attachment for chainsaws that will cut grooves. There are also attachments for cutting with a chainsaw.

Can you provide a better description of what you mean by a "dado cut"? Width, depth, length wise, cross wise? Or what the "dado cut" is intended to do?

From the original questioner:
I plan on cutting the logs two sides, leave two sides round. After dadoing lengthwise, I plan on splining the logs with OSB strips and placing gasket material on each side. Any cracking should go to the dado and therefore be hidden.

I thought of a router but I thought a blade of some sort would push through easier and clean itself better..?

I have seen 1/4" masonite used in cuts run with 3-4 stacked blades on a skilsaw. It ain't easy on the saw. Fairly labor intensive to keep straight, too. You can't make the groove/spline very tight and still expect them to fit together, either. Router-wise, believe it would be real tough to do without a large router and an upcut bit and a straight guide.

From contributor K:
I have used my little Lucas to cut slots all the way down logs. Dead straight and very fast. If you make your cuts about 3/4 to 1 inch apart, you can make wide slots quickly by cleaning out the middle with a chainsaw. If you want a better finish, make four cuts to the inch. It really takes very little time and it looks nice and the width is as accurate as you care to make it!

From the original questioner:
Contributor K, I agree - this is probably the best way to cut the dados, but unfortunately I can't afford another sawmill. And I don't know of any in my area that I could hire. That would be the berries, though. Shape them on the band saw, dado them on the circular saw, hook them on the skyline and ship them off to the cabin site. What a dream.

Low tech. Saw edges of your channel with a circular saw. Make releasing cuts between. Chisel out the waste.

Seems you could use your saw carriage to make a straight mark (crayon, chalk, or felt marker) and then use the handheld electric saw to make a free-hand sawcut on the marked line (one each on both sides of the dado you want), and then clean it out as suggested with chisel or with the router you originally suggested. Or any number of simple jigs could be made with a long straight edge to control the saw cuts along the log length. A block jig clamped to the tip of your chainsaw bar would also follow a straight edge, as well as clean out between the parallel sawcuts.

I would try a 3 hp router. Get a plunge router so that you can take three shallow cuts to get the depth that you need. Get a 7/16" router bit. This will fit the 1/2" osb. Make your splines about 1/4" higher than the two dadoes. Use long screw nails that are designed for log houses. When you drive the nails in, it will force the spline to expand and fill the dado. Put a foam gasket designed for log homes on both sides of your spline. They also make a special cauking that could be put in the dado before the spline. A straight edge should also be made up. Drywall screws can be used to hold the straight edge in place.

From the original questioner:
You have given me lots of ideas, from the fastest way, the circular mill already on a straight track and powerful, to the low tech hand tools. Even though I had never dreamed of getting a circle mill, this has me thinking along the edger line with one having the ability to raise the blade for dadoing. An edger would definitely enhance the operation anyway. All the low tech ideas were equally as stimulating but I plan to build these log cabins to sell and I will need to "get it on" as Mills Lane would say.

Time is money, so you had best get a machine that fits this need if you are going to do production work, and carbide tipped bits/blades are a must have.

If you have a circle mill you could make it into a milling machine. Make a fixture to hold the router. Clamp this fixture to the saw head. After flat siding the log, clamp on the router and mill the dado. If the rotation is right on the router, you might be able to mill down the log and dado on the return.

With a little fabrication, I could see a unit that is set up like a debarker. Hinged and indexed to cut the exact depth.


I'd vote first for the swing blade mill, but Larry Haun wrote the "Very Efficient Carpenter" series for Taunton press, and I'd have to look it up to prove it, but I seem to remember him using a worm drive with a dado to clear bird's mouths on rafters. I looked at the picture a couple of times because I didn't think the worm drive had a long enough shaft for it. I'll try and look it up; maybe he modified the blade a bit. I think I remember an adjustable dado blade. I like the worm drive idea.

I got a straight edge guide from Home Depot for about $15 and clamped it to the timbers I had to cut. If you're going to do this as a production shop job, you should get the correct tool for the job. But that means investing money that maybe you don't have right now. The skil saw with a dado or groove cutter is the tool for the job, and they are readily available from timber frame tools supply houses. If you had one of these, you could cut the dado using a straight edge guide.

At Home Depot or a store like that, go to the tool crib and look for ProEdge near the levels and squares or tape measures. They come in two four foot three inch sections and they hook together to make one long eight foot six inch straight edge. But you can buy more than one and hook them together to make longer straight edges. And just nail these down to the top of your log with a duplex nail and make your cut and move it down the log, to the next section.

This straight edge could also be used with the router. Either way you should do it with simple power tools available to you, and later buy the big fancy one that will do it all.

Here is a shot of the edge guide with my worm drive skill saw: 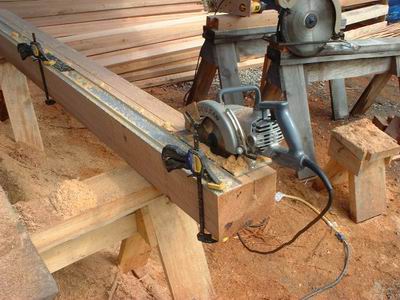 I figure it wouldn't be too difficult to mount a large router (I have a 3 hp Porter Cable) to a plate on a bandmill, creating a large overarm router. Would be awesome for this I would think. Even thought of making a plate for two routers which would allow you to make a double spline cut in one or two passes.

Comment from contributor N:
I have used most of the equipment mentioned here and find by far, the Makita groover to be the best. It is a solid machine that cuts through like butter. It beats a router or saw hands down.