Construction methods don't appear to be the problem in this example. More likely is a manufacturing quality issue. February 13, 2013

Question
If you look at the photos you'll see that the layer of 8mm bending luan ply closest to the 1/4" white oak face layer of the rails has failed. It's not a glue layer failure of the bending ply, but rather total wood layer failure.

These parts are about 4 1/2" high and 3/4" thick. They are made to the precisely required radius with 2 layers of 8mm bending ply and the 1/4" white oak face layer. There was little or no stress on the parts required to set them in place.

They are applied to a 1/4-circle half wall in 3 approximate 30" sections. They frame around large center panels but do not touch the panels. There are similarly sized upper and lower rails at each panel. Vertical stiles separate the rails into 3 sections along the arc length of the wall. The rails are on both sides of the half wall so there are concave and convex curves involved, but the failure is more significant on the inside of the curve.

They were shipped to our customer in longer sections that were cut into pieces. The half wall has a 36" high x 3/4" thick center core that everything builds upon. That is made of 8mm bending ply as well and seems to have remained stable. My customer glued these failing rails to that center core. As such the only non-bending ply involved where the rails are applied are the 1/4" white oak layers on the faces on either side of the wall.

I think there has to be one of two things happening here. Either the bending ply is shrinking significantly cross grain (as would be expected if it had a high moisture content) or the entire wall assembly has lost its radius once built (not likely, as they made plywood plates on their CNC to work from and all individual radius parts were made to the correct specs). If the bending ply is shrinking, it makes sense to me that the inside curves are pulling apart the most as they straighten out. Likewise, the outside curves would have minimal wood failure by comparison since the outer layer of 1/4" oak serves as a compression strap.

I've been using bending ply as a core on radius parts for nearly 20 years and have only seen something like this once a long time ago. It was very minor and happened prior to installation. I took it to be a bad sheet of ply and just remade the part.

This failure did not happen immediately. The walls were basically assembled missing a few trim mouldings and set aside for 3 or 4 weeks. The failure occurred during that period. Any thoughts? 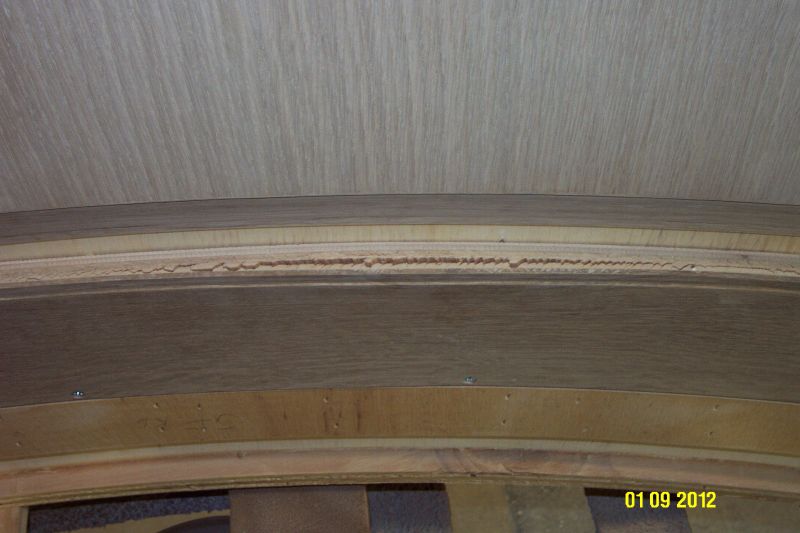 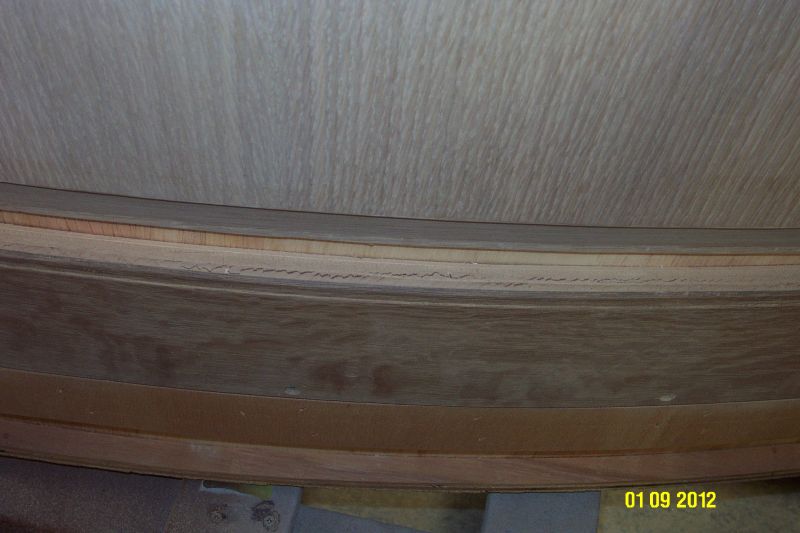 
No idea what caused the failure, but I have noticed a decline in quality of bending ply lately. We did some window jamb extensions last month and noticed a lot of the ply was delaminated in spots. I was wondering if this is an offshore product now.

From contributor M:
Bendaply has been hit and miss for some time around here. Saw a good run last summer and purchased the entire unit, where normally I would purchase just for the job. I have seen what you are showing us.

From contributor O:
Have seen this with bending lauan (which has always been an import) over many years. I believe it is caused by lathe checks, which are fissures between the wood fiber created in the slicing process. Factors like veneer thickness (bending lauan uses very thick veneer) and knife sharpness affect the degree of the lathe checks. This is one reason I prefer to use 1/8" Italian bending poplar whenever possible.

From the original questioner:
One of the options we've been discussing for the remake is the 1/8" Italian bending poplar. My only dislike of the product is that I've found it can be a little wavy even on 1/2" to 3/4" thick buildups. It just doesn't seem to give the stiffness to the curve that the thicker bending luan products give. I haven't experienced any, but have you seen failures with the 1/8" bending poplar? Glue line delamination, etc.?

From contributor O:
I would have said the opposite about the IBP - very smooth, flat, consistent laminations. Maybe it's a technique difference. Are you vacuum bagging over a form?

From the original questioner:
We do the laminations various ways. Stegherr strap press with particleboard forms, vacuum sleeves, frame press and an arch rack with adjustable arms are most of our options. I just find the bending poplar to be a little more wiggly when done.

From contributor E:
Would kerfkore work? I've used it without any issues.

From contributor F:
A couple thoughts that may or may not be worth considering... Although the bend seems slight, 1/4" ply does not like to bend much. I wonder if by using the 1/4" white oak ply, the pull by the ply is too much for the bendy to withstand and over time it essentially gives out to the ply?

I'm not sure how well multiple layers of poplar would work, but have you considered using Neatform or similar product with a white oak veneer instead of ply? I know... much more expensive, but the stuff does produce a pretty decent curve.


From contributor M:
I might be a bit off here, but… If this panel had started out flat, it would have surely developed a curve: convex on the face side, as the glue-up is not balanced. The same actions are happening between the layers in your panel, but the radius converts more of the sheer stress into a delaminating stress. The inside is not compressing while the outside is expanding and causing it to pull away.

From contributor G:
I think the outward force generated by bending the 1/4" white oak has exceeded the structural capabilities of the bending ply. The solution could be thinner face veneer or better ply. Of the two, the face veneer is probably the only one you may have control of?

From the original questioner:
The solid oak face is 3/16", but 1/4". Not a significant difference in thickness, but a big difference in pulling force. If the oak were too strong for the bending ply (which is not the case as we've been using this system successfully for nearly 20 years), then the outside curves would be separating at the ends instead of the centers. The inside curves are captured at both ends, which locks the 3/16" oak face into its concave shape. As such it is actually pushing out towards the bending ply in the center of the curve. This should prevent delamination.

From Professor Gene Wengert, Sawing and Drying Forum technical advisor:
I agree with John that veneer checks from an improper lathe setting are likely the cause of excessive weakening, leading to failure, as described. As the lathe can be adjusted or the source of plies can change, this problem will go away in future loads, but does reflect an overall quality orientation that seems to be missing.

From contributor L:
We no longer use bending ply - too many problems. Alternatives: thin layers of fiber board, kerfing MDF, 2 layers of kerfed MDF, sand the face veneer off one side of 1/4" ply and use it as core layers. Bending ply never smoothly curves, so you have to use thicker veneer or you get telegraphing. The real killer is when they don't get the fiber structure of successive pc oriented 90 degrees to the thin core veneer.