Question
We recently had a problem with an employee who switched brands of deodorant. This caused fisheyes in everything he sprayed or touched. Does anyone have a compiled list of offending brands?

Forum Responses
(Finishing Forum)
From contributor R:
I don't know of such a list, but maybe you could start one by telling us what brand of deodorant your finisher switched over to. Hair tonics have been known to create problems, but this is the first I've heard of a deodorant causing a problem. Was it a stick type or a spray on?


From contributor J:
How did you guys narrow this problem down to it being deodorant? Did you recently fire up the heaters in the shop or spray or rub anything on the table saws? Did the forklift get worked on or have there been any issues with the compressor? Long shot, but by any chance did an automotive detail shop recently open up within a mile of your shop? That's some pretty heavy duty deodorant to be causing that many problems. I would guess that probably isn't the source, but you've got the inside story.

From contributor D:
Just to back up your claim, I used to service Liester Furniture in Hanover, PA and the owner had such a fisheye problem. He started testing everything and anything that his employees used on hands, arms, hair, or faces and compiled a list. You could not enter his state of the art finishing room if you had used anything on that list! My guess he is still using that list.

From contributor C:
More backup. I worked for a very large (1,000+ folks) furniture manufacturer years ago, and this was a common problem. They would actually rub down the underarms of new finishing employees with a sample block and run it through the system. More experienced employees that had seen the problems firsthand would bring in new deodorant samples before actually making the change.

Just an FYI: the second biggest cause of random fisheyes was lunch. Things are great for four hours, and then it all goes south after the crew returns from lunch. People just touch weird things when they aren’t on the clock.


From contributor Y:
Auto manufacturers had serious problems with fisheyes in their finishing plants until they traced it to the deodorant problem. So this is not a new or unusual source of contamination, but rather a pretty notorious one. As you might expect, it is the stick or solid types that do almost all the damage. The crumbs sift down onto the work as the day passes. Roll-ons and sprays are far less likely to cause problems. At one point in time, a shop that I am familiar with here in Saint Louis was making quite an income repainting brand new cars for dealerships (and being reimbursed under warranty by the manufacturers) because of this problem (but the manufacturers had not yet identified it at that time). They were stripping them to bare metal and repainting completely. You can imagine what a terrific expense it was for the manufacturers to pay!

From the original questioner:
The employee in question used the same deodorant for 10 years without a problem. Then his wife bought him Degree Gel type deodorant. He came into work and we had nothing but problems.

In fact, I had him rub a wood sample on his underarm. We sprayed it and it looked like a topographical lunar landscape map.

It seems like most of the gel type deodorants have silicon oil in them.


From contributor S:
Has anybody had fisheyes when spraying on classic core plywood? It started happening when I started using classic core ply. I can spray solid raised panel doors, and they are fine. The next panel is a shelf and it fisheyes terribly. This classic core has such thin veneer I think the glue is reacting to the precat sanding sealer. I don't use deodorant or sprays of any kind. These fisheyes are like little bubbles, sometimes just 6-8, and sometimes 40-50 per shelf, which then develop into 1/8 to 1/4 inch fisheyes upon drying. I'm thinking of not using classic core ply. It is too much work to sand these out.

From contributor J:
Contributor S, I think you're dealing with bubbles only and not fisheyes. The depressions when drying are basically the same for fisheyes. There's surface tension, and since an area has a bubble taking up some of its pulling power, the surrounding areas win the tug and steal some extra coating. Try this on the ply - a couple light coats (mist) to prep the surface and then lay down a regular coating.

From contributor D:
Ditto what contributor J says - and you might add a little retarder to the material. Sometimes it is hard to spray a thin coat without it flashing too quickly. You may not see bubbles after the thin coat, but they may show up again when you re-wet with the next coat. Try contributor J's method first and add retarder only if you still have the bubbles.

From Paul Snyder, forum technical advisor:
Contributor S, I've been seeing the same problem with random bubbles lately, but only with pre-cat primer. In a clear coat finish, I start with vinyl sealer and it doesn't cause the bubbles.

This is one of the larger bubbles that I get: 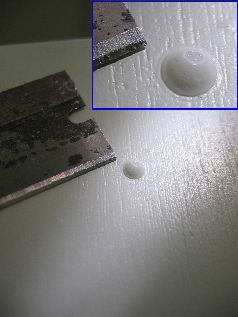 When I slice the bubble off with a razor blade, you can see the depression it leaves. When you sand the bubble off, it does look like a fish-eye.

To avoid the problem, I've been spraying a light, thin coat, letting it flash off, and then coming right back with a wet coat. 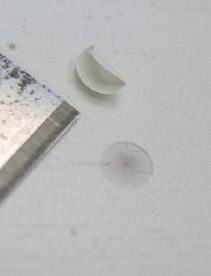 From contributor J:
That bubble is neither fish-eye nor bubbles from agitating the coating too much. When you sprayed out this primer coat underneath, was it in the morning? I ask because, with the heavier pigments in the primer as opposed to clear sealer, this just might be flashing off too fast, thus trapping the air/gas in the pores of the wood. Toward the end of the day the shop starts to heat up and when the opportunity comes and the primer coat is rewetted, these air pockets want to be released so they will migrate up through the coatings and not quite make it through the final topcoat, thus making an air pocket for you to enjoy. My theory is: slow down this coating system - primer and topcoats.

From Paul Snyder, forum technical advisor:
Contributor J, I figured it was air entrapment. That's the first coat of primer that has the bubble. There's no problem with the second coat. Laying down such a heavy coat caused it to skin over before the air had a chance to escape. A lighter coat of primer to seal the wood takes care of the problem.

From contributor B:
Another idea on the deodorant issue - when you use a water-based finish after final sanding with a stearate coated abrasive (the zinc stearate relieves loading) the same fisheyes occur. At Abrasive Resource we always recommend that "no-fill" products are avoided for a final sand when fisheyes are showing up. I believe stearates are used in all sorts of personal care products, including cosmetics and deodorants.

Comment from contributor K:
We had a problem with clear lacquer finish with fisheye and came to the conclusion that it was the lami lube being used in the shop. This is a silicone spray lube for laminate routing.