Question
I need to heavily distress a bunch of pine box beams for a customer. The sample they gave me has long and wide distress gouges in it (varying of course, but say 3" wide by 6" long) throughout. Is that most likely done with a hand plane with a rounded over blade? Do they sell blades for this type of application, or do I just go to town on the grinder?

Forum Responses
(Architectural Woodworking Forum)
From contributor M:
I believe Virutex makes a hand power plane sold at Woodcraft stores just for that. We make our own by grinding the high speed steel blade of a Makita power plane with an arc.


From contributor C:
While working in Vail a few years back we had miles of beams that had to look hand-hewn. We took an old circular saw and set the blade depth about 1/4" then used the saw like a plane. Worked great. Be careful.

From contributor P:
I believe what made the old marks was an old scrub plane blade, like you have observed. So if you have a lot to do, I'd emulate that look with the ground blade electrically as mentioned by contributor M. The Festool blades are very expensive and the scallops aren't nearly as wide and also too uniform, and although an excellent tool, the planer itself would be a bear to swing around every six or ten inches. I've got a cheap old Bosch that's light as a feather that I use just for planing down some old or used lumber that is suitable for just such a job.

From contributor J:
Another method (tried and true) is to use a hand or foot adze designed specifically for this purpose. They can be had for under $20 on eBay. Very labor intensive.

From the original questioner:
Thanks for all the suggestions. I've seen something like a two handed scraper/gouge used on flooring. Anyone have experience with a similar tool?

From contributor N:
Several years ago when I was working for a GC, I had to distress a beam to match an interior. Ended up using an angle grinder with rough sandpaper discs on a heavy cardboard backer to replicate the hand-hewn look. Worked really well, but a 10' beam took about 2 hours to do all 3 sides if I remember right.

From contributor V:
We just did quite a few miles for a restaurant. We used a Makita ele hand plane and then a router for the round over, followed by a liberal dose of heavy chain.

From contributor R:
We did a lot of this while I was in Nevada for Lake Tahoe homes. Power planes will work but they don't look authentic. We used Lie-Nielsen scrub planes a lot. It is surprisingly easy if you keep it sharp and goes very fast in pine. Some jobs we used an adze or a hatchet and the two handled tool referred to as a scorp. The best ones are from Barr tools. 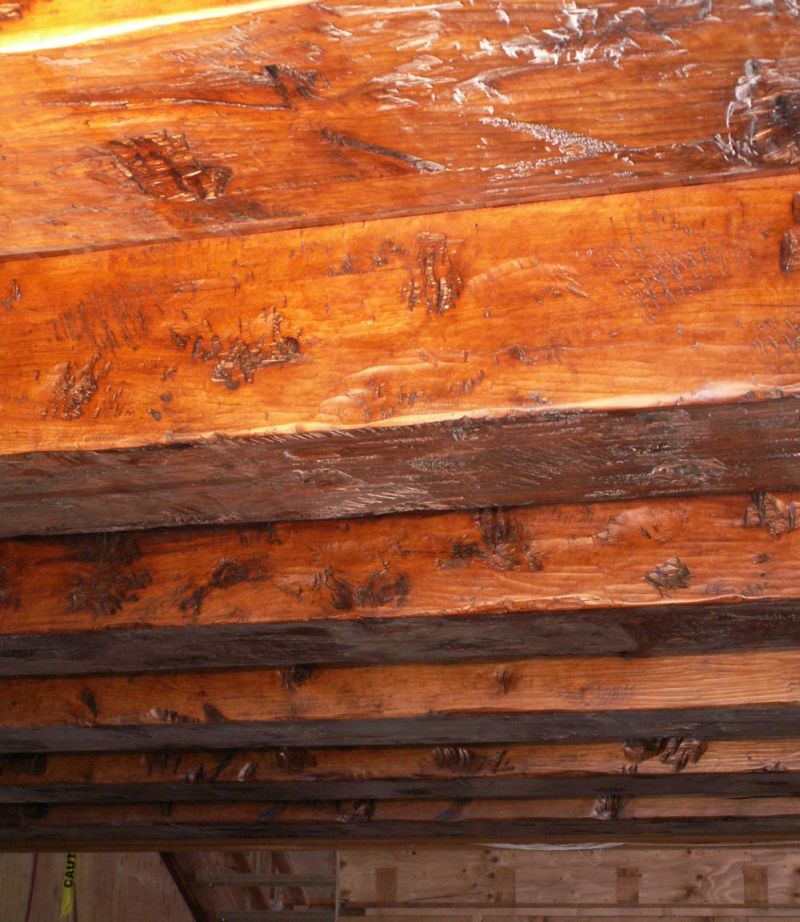