Double Stacking Cutters On A Shaper

i normally do my stiles and rails with the ogee profile but I'd like to do mission style as well. What id like to do is set two shapers up with both profiles but have positive stops so that I could quickly and easily go back and forth between the two profiles without changing cutters every time. I don't see any problem with stacking the cutters but how would one create positive stops? I'd like to eliminate the trial and error of getting them lined up perfectly to each other every time. Thanks

Maybe you could try an auxillary table top to raise the surface to the correct ht for the next set of cutters on both machines ?

Mike stack your cutters set the height of the bottom set it to the table , make a secondary table for the top one, look at Weaver's website you'll get a better idea of what I'm talking about that's how they do it on their single shaper system

Digital Readout. This is an incredibly accurate and handy tool that will make any shop more productive. It will sound expensive until you realize it will pay for itself in about a month in saved time. I have about 7 of these on everything I can, and after many years, set up times have dropped remarkably, and accuracy increased.

I like the Accurate Tech products (and support), but there are others that cost less. The ones I use read down to .0005 - everything anyone working wood could ever need.

Take some time to install it so you get the best readings, and you will never look back. The photo shows the two on a single end tenoner that was notorious for taking 15 minutes to set - if you were lucky. It now takes less than 3 minutes, and requires no time to fine tune.

Digital read out for sure

John, if I used an auxiliary table wouldn't that require have to lift the feeder up as well?

David, the digital readout is the way to go. I have digital readout on my powermatic shaper, but I didn't know that you could get the device to put on a share that you already had, I'll look further into this. Thanks 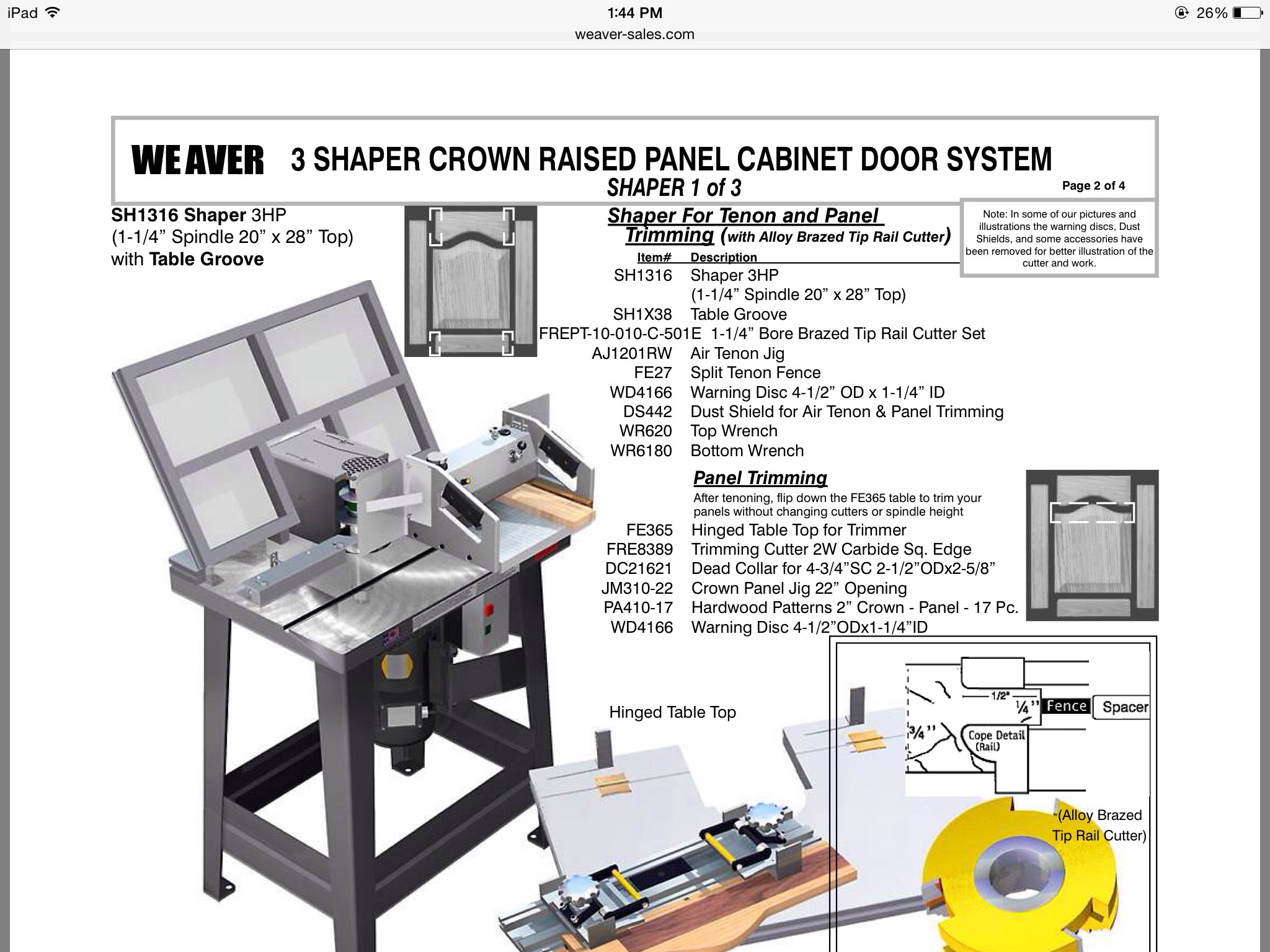 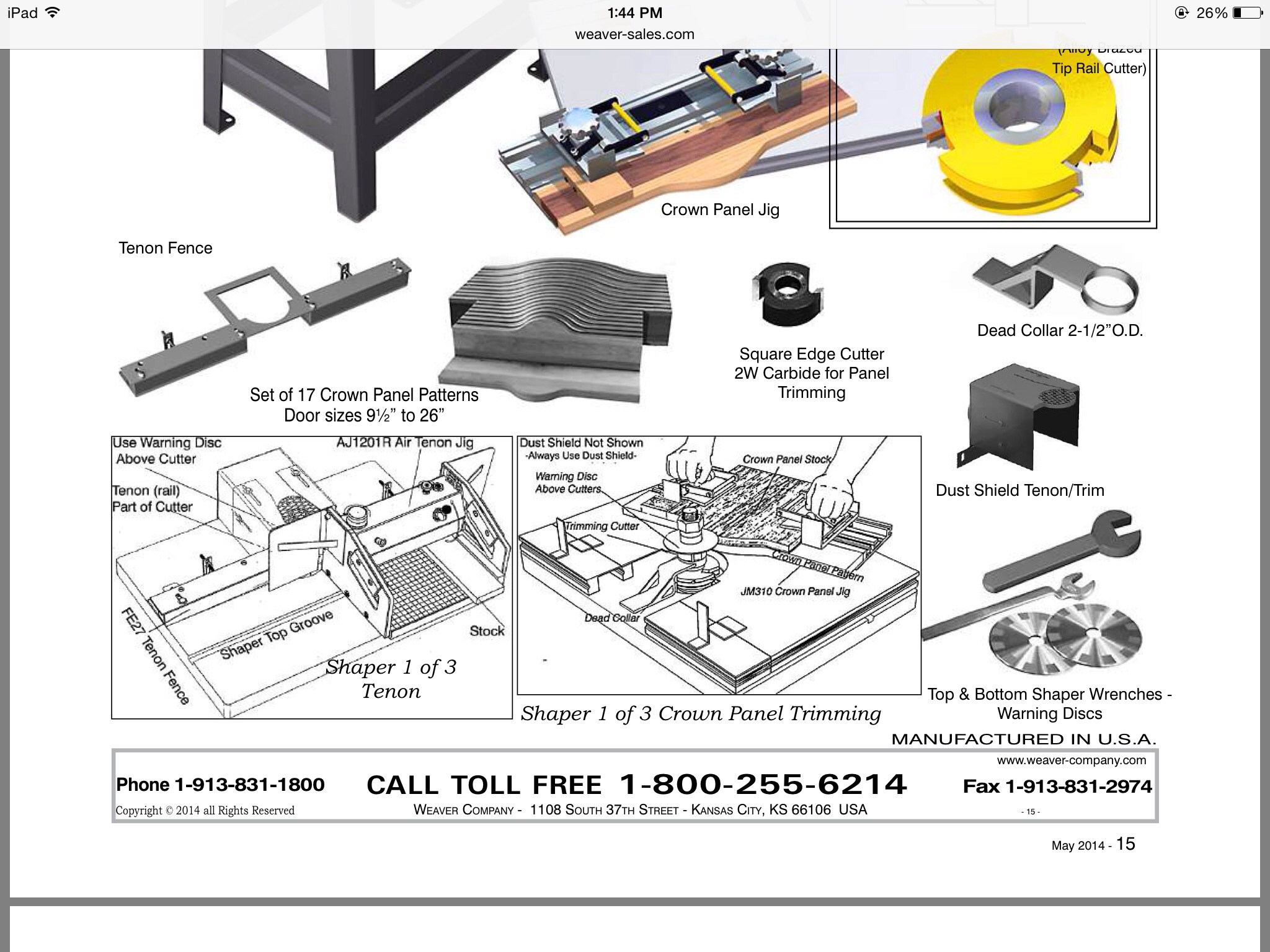 I have three profiles I use and have them such that I exchange cutters but don't have to make any adjustments. Somehow this seems easier than adjusting the spindle every time. Digital read out or not.

I also run three sticking profiles, three panel raises w or w/o backcutter, and spiral flush hogger.
I keep them setup to remove and replace as a set, and NEVER adjust the spindle height on any of my shapers.
Bushings and/or shims are cheap and foolproof.

To each their own, but cranking a spindle up or down an inch to a preset known dimension is a whole lot easier than changing cutters. The change can even be made while the machine is running.

The point is that the DRO makes it fast and foolproof, more so than anything else but a row of shapers with adjustment handles removed. The chance of inaccuracy is eliminated, saving more than just time. The first piece run can be needed stock instead of a scrap to see if it is right or not.

The use of this type of equipment also opens doors to other places in the shop where the speed and accuracy pay off over time. If you think of payback in 5 years time and the DRO saves 1 minute per day, it pays for itself in about a year. It is almost more about a way of thinking than it is about a simple "what to do."

Having one digital readout shaper, I know that it doesn't get any easier than cranking the wheel to the right readout and being done. I think it would be worth the investment to me.
I'm not sure how the digital box works though? What does it mount? How does it sense the movement...

BTW how would the digital readout work on a table saw?

The readout display box is connected to the actual reader by a small cable - like a phone connector cable for landlines. This allows reasonable location of the box where it is most visible and out of the combat zone. The reader is a stick and a read head, and this mounts on the spindle housing and the spindle casting under the machine. Set up is easy, once those mountings are secure.

Two AA batteries, and you are ready to go. The website goes into all the other features - zeroing, metric, remote storage of info, etc. The site also has suggested model and reader combinations, and their phone help is excellent. I have them on the planer, the tenoner, one mortiser and the shapers.

My only complaint is the batteries.

Splitting hairs was never so easy.

If you want a digital read out I have one I am not using. Bought it for a planer but then sold the planer and bought one with digital already on it. Send me a e-mail if interested.

Bruce will that work on a table saw?

Pat, not sure if you are asking for the fence or blade. This is for height adjustment and not long enough for the saw fence. I can send a photo if you want. PM me with e-mail.

I was thinking of the fence.

They have one on their site for table saw fences, just not sure if it really works? I'm guessing that the reticence to my question indicates not so much?

I have the prostop on a jet xacta fence. Its fantastic. It is more accurate than I would ever need and can switch between mm and inches(fractions and decimals.) Not to mention easier to read than a tape or scale in my opinion. Also have a set up on my panel saw and chop saw. Will be adding a fourth to radial arm saw soon.

Kevin has discovered what I found. Convert the whole shop and put down that tape measure. I don't have one on my tablesaw fence yet, but that is next. I do a lot with the fence removed so I have to work that out....

I will add that a Starrett digital caliper completes the change to digital woodworking - of another sort. My eyes are not getting any sharper, and the accuracy and confidence are a whole new world. The caliper compliments the digital readouts and puts everything o n the same level.

I can now measure things better than anytime in the last 45 years of shop work. We regularly adjust fits by a few thousandths to go from slip fit tenons to hammer tight - all easily within our control. The hottest change in my shop since....I don't know when. Damn, I'm glad my competitors don't know this.

Sorry to turn this post into an adverstisement for proscale, but I thought it was worth mentioning they are offering 25% off until the new year.

Thanks again Kevin, calling them now.

We have double stacked cope/stick tooling for years. As others have noted, all this requires is an auxiliary table to adjust height position on the cope sled and stick table.

There are some on this forum that have also developed coping sleds on one side of the arbor and powered sticking on the other.

David Sochar's suggestion of the digital read out is a good one but requires a shaper that has minimal tolerance for error in the up-down adjustment. A lot of the import shapers are good for stand alone set ups but have so much whip in the thread that there is still a little bit of trial & error in the positioning.

I think where the DRO would shine is if you just wanted to use corners of the tooling for smaller profiling. We, for example, have some bump stops set up on our coping sled that convert a shaker cope profile into a repeatable rabbet joint for little cubby drawers.

Stackable shims is also pretty bullet proof for repeatability though not as fast as DRO or changeable shims on the table surface.

If you trend this out you can find lots of ways to repeat fence locations. We use shims like this on our table saw fence for repeated set ups. Lean is all about set-up reduction.

FWIW I put the Digi Fence on a Powermatic, works as advertised and easy to install.