Question
I'm thinking about splurging and picking up a new drying rack. I have a shopbuilt one that's been ok, but not really as good as I'd like. Also it's not sturdy enough to make it mobile which is a real pain! Before I spend my money I'm wondering if there are any suggestions for good drying racks? I’m not thinking about another shopbuilt at least for now - I'm booked solid and won't have any spare time this summer!

Forum Responses
(Finishing Forum)
From Contributor D:
I have two of the Hafele ones and they work very nicely.


From contributor J:
I have a couple of the Hafele racks which are identical to the Richelieu ones. They are great, except they have a tendency to mark the doors if you try to flip and spray too soon. The side needs to be very dry before flipping or the wire shelves will leave a mark.

A local finishing shop has put these into service, then almost immediately out of service for this reason. They now use some shop made ones with 5/8" plywood strips on edge to form the shelves. They put a radius on the top of the shelf edge so there is minimal contact with the door. They say this has solved their problem. They have about a dozen of these shop made racks in use catching parts off a flatline. The downside is they are quite big and bulky.

Me, I still use the Hafele racks because I like how small they are and just try and be careful when flipping. If I am in a rush and need stuff flipped before it should be, I just give the doors a little bump to shift their position every 20 minutes or so until the parts have developed sufficient print resistance.


From the original questioner:
My shop built rack uses 1/2" emt and has the exact same issue. Not sure why the plywood wouldn't leave the same marks? But since I'm used to it already, (I also nudge parts over when I'm trying to rush), that wouldn't bother me. My goal is to double the amount of drying space so I won't have to rush as much (in theory anyway).

From contributor J:
Then you will really like the rack. It’s well-built and holds a pile of doors in a relatively small space. I really like the rack, I just wish there was an easy fix for the printing. It’s a very soft radius they put on the plywood – it’s not a full radius. So it could be just that it has a slightly larger contact area, the wood is a little softer for the finish to sit on, or the finish just behaves a little better on wood instead of metal. I haven’t inspected their parts so I really have no idea. They just told me they get printing with the Hafele, but not with their wood ones. They are spraying post-cat lacquer with a Venjakob flat line. I spray conversion varnish or waterborne by Sayerlack with a CAT AAA. The waterborne is a little less susceptible.

From contributor G:
I build these plywood racks and edgeband the top of the supports with PVC and break the edge slightly. I think the plywood racks have a larger bearing surface and that is why they imprint less. These ones were built to be able to disassemble and store the cross pieces in the center box but they could be made taller to accommodate more doors. 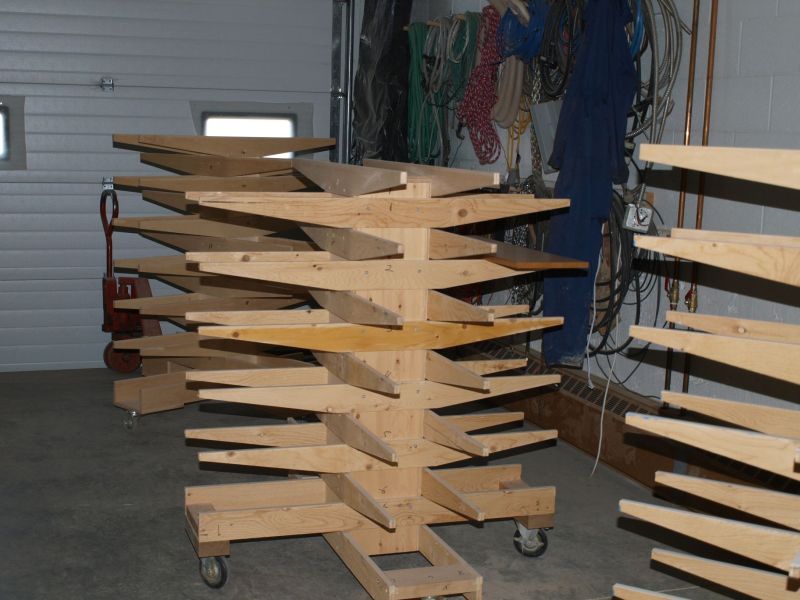 
From contributor J:
The ones the finishing shop I was talking about are almost identical to yours. Theirs are a little taller, but same idea.

From contributor G:
I have seen a lot of different versions of this design. It works quite well but I can't compare with the tubing racks as I have never used them.

From the original questioner:
I'm spraying ML Resistant and Duravar mostly through a three-stage turbine. They dry pretty quickly but still probably need about two hours or so between finish coats. How do you like your CAT setup? I'm also seriously thinking about upgrading as the turbine is very slow and requires a lot of thinning to get the material to atomize!

Contributor G - those look like nice carts you have! I have a shopbuilt version already but it's just not what I really need. Mine can hold about 32 doors in the space that the Hafele style hold 50! Space is at a premium so I need a tall vertical cart that is very stable, easy to move and cost effective. Right now I can't afford to take the time to build another as I'm much too busy.


From contributor U:
I have one of the Wireline racks and used it for years. Its ok but the racks angle upward too much for me and the racks are closer together than I'd like. We built two racks using 2x6's and 1'' PVC water pipe. You can put 16 doors on each side. We had enough material left over to build one with the racks just on one side – it’s smaller and lighter and turns out that it’s the favorite. The Wireline rack rarely gets used anymore.

From the original questioner:
I did pick up the Richeliue rack yesterday though and I agree the racks are a little too close for my liking! I wish they made it a little taller and opened up the spacing a bit! Anyway I'll try it out today as I start getting primer on these doors. No AAA yet, not sure I wanted a learning curve on a full kitchens worth of doors! I am close though as the Turbine is just too slow and heavy to deal with.

From contributor J:
There’s no real learning curve on the AAA, other than move your hand faster. They are actually very easy to spray with, very easy to clean, very easy for everything. Production speed will go way up. See if you can get a demo from a local supplier as most have demo units. Once you try it you will wonder why you waited so long.