Getting into the nuts and bolts of an underperforming edgebander. April 10, 2012

Question
I have recently started having problems with my edgebander (a ten year old Bimatic Silence) not keeping up with glue on long runs. Basically the glue roller starts to run dry after a number of panels (10-20). I have to wait ten minutes to build up enough glue to do a handful more. I increased the pot temp from 190 to 210 and it helped a bit, but still won't keep up.

I was wondering if it is time for a rebuild, or if there is something that may need to be adjusted. I have played with the glue thickness adjuster to no avail. Any comments on rebuilding this? It seems to not be getting glue up from the pot fast enough. Suspect debris (shavings from PVC banding) has been getting onto the glue roller. Also, I have serviced the machine and adjusted just about everything on it to date, so I would be doing the rebuild myself most likely.

Forum Responses
(Cabinetmaking Forum)
From contributor R:
I'd check the heating elements first, thermostat, and then blockage through the gate.


From the original questioner:
The heating element and thermostat are definitely working. There is a noticeable difference between 190 and 210 (the banding started to belt above the gluepot). I’m very interested in the "blockage through the gate". I used a thin metal shim to feel around the roller and clear debris already - can you be more specific?

From the schematics there appears to be a large roller and two smaller posts (one is adjustable to limit the thickness of glue going on main roller). I’m not sure how the glue climbs up the roller to coat the entire surface though - is it capillary action?

Below is a schematic for the glue pot. 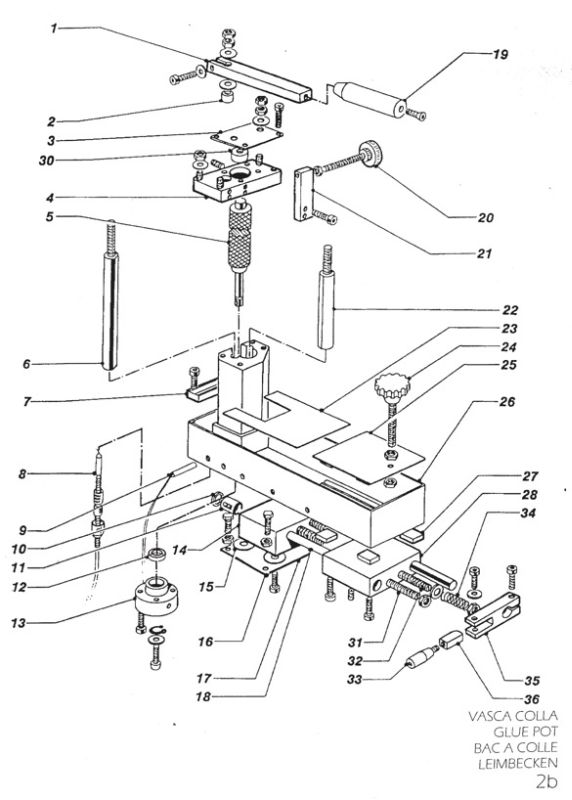 
From contributor D:
As you know I have the same machine. I would try taking the top (#4 in the pic) off to see what you can see. The two posts beside the main roller will easily pop out if you do it warm. I found mine were crusted up with burned glue that I had to chip off with a chisel. A wire wheel didn't do much. That might be a good place to start.

From the original questioner:
I should also mention that I recently switched glues (using Kleiberit #782.1). Maybe the previous owner's glue had different working properties. Also, how do you adjust the second (shorter) roller? Should this be done before the longer one with an adjustment arm?

From the original questioner:
Update: the glue pot isn't heating up properly. It appears to be heating up (temps rise on the control panel to set temp), but the glue is still very thick, and hard on the surface. I just replaced glue last week so it's not burnt. How do I test the elements and heat probe?

From contributor D:
I would use an ohm meter. A failed element should have infinite resistance. I don't know how to adjust the second pin.

From contributor R:
You can get ash in the glue tower that will restrict glue flow. I'd still check the heater(s) first.

From contributor B:
Get yourself an infrared and check the temp at the glue roller. The difference between my bander's readout and the temp at the roller is about 15-20 degrees, which was enough to cause serious problems until I figured it out.

From the original questioner:
Well, after cleaning out the pot, removing and scraping the rods in the tower and refilling the glue pot it seems to be working ok. The glue is still fairly thick in the pot (haven't been able to check the elements yet). I don't really know what glue to use with this machine – I could have the wrong stuff. It appears that the problem was a combination of the following:

-Old glue deposited on surface in front of roller in base (observed after removing #7 from diagram).
-Not enough glue in glue pot to flow into front of pot.
-Glue too thick to flow evenly by gravity from back to front of the pot.

I did this all with gluepot heat on and was fairly easy task overall. It took two-three hours.


From the original questioner:
Here is a picture of the front of the glue pot. The glue didn't even appear to be touching the roller. 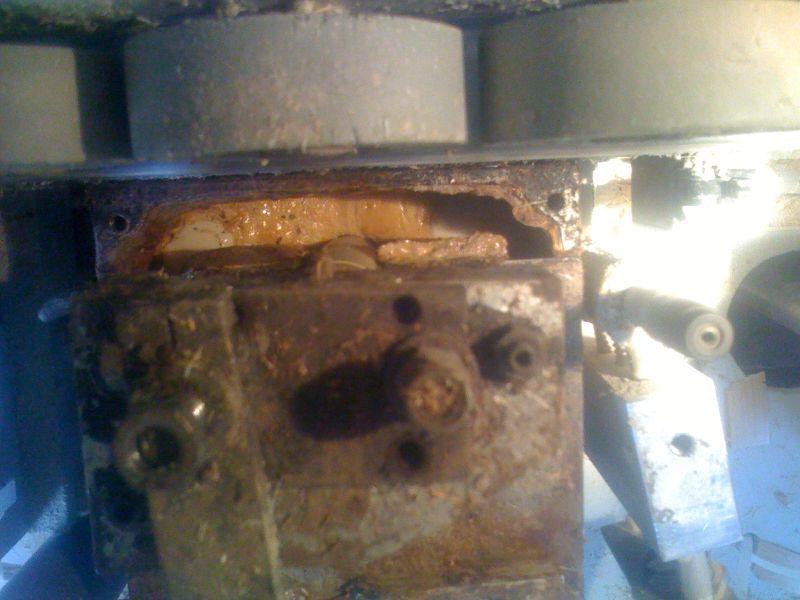 
From contributor M:
Glad you got it running again. If you have a good non-stick coating left on the pot, it would be good to periodically "stick it" and scape it clean. I suspect the glue flow was impeded by the burned glue build up. Increasing the temperature of the glue was thinning it out to flow easier, but also burning it to the glue pot parts faster, kind of a catch 22.

I also think you were right in trying to check the heaters to make sure all are working. As someone mentioned above, a simple ohm meter works. Set the meter to resistance, and put the probes on each of the leads (not the ground) and if it reads anything, it is good. If it does not read anything, it is bad. We rebuild all brands of glue pots, so feel free to call us if you want to discuss in greater detail, or check our web site for more on maintaining your glue pot to extend its life.


From contributor W:
Recently our glue roller had begun to squeak and flow funny, intermittent problems. I purchased all parts for the rebuild and scheduled a time to rebuild. Another fellow and I dismantled the pot and roller, soaked the pot in lacquer thinner, cleaned all of the parts, and it was ready to go back together. I saved a good 1/2 or better on a full replacement and checked all the other components and replaced all of the blades while he was there. It’s running like new.

From the original questioner:
I finally checked the wiring and temperature and everything appears to be working correctly. Heat elements were easy to check - by disconnecting the plug in the terminal for gluepot and measuring resistance on each pair of wires (eight elements total - two in the tower). I also used a temperature probe to measure the temps in the pot as well as on the roller surface and both measured within five degrees.