Question
I built some mitered posts out of cherry for a project and used clear packing tape to hold the seams while I glued the joints. These posts sat in my shop for a while before I removed the packing tape. Apparently the tape filters UV light, because I now have "tan lines" on all the posts.

Sanding doesn't seem to have any impact. I'm considering trying to put these out in the sun for a while to even the color out (it's been rainy here for a couple days, so I have to wait until the sun reappears). I've also considered running them through the planer, because the exact dimension is not critical. In either case, I would prefer to even the color out before I proceed on assembly, which will make even sun exposure more difficult and planing impossible. Based on other forum entries, it would probably be possible to balance the color at the finishing stage, but I would prefer to have it as even as possible before I get to finishing.

I've had a similar issue with mahogany in the past. This was not due to packing tape, but overlapping boards being stored. If I remember correctly, the color evened pretty quickly by sanding in that case. I've included a couple pictures to show one of the posts with the color variation. 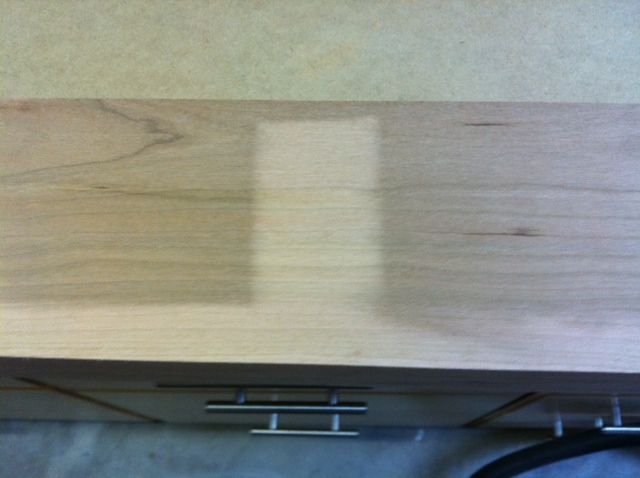 Forum Responses
(Finishing Forum)
From contributor J:
If the board thickness is not critical, I would run it through the planar first and see what happens. Putting it out into the sun is not always successful and I don't think you want to have to deal with it on your finishing schedule. Can you flip the board?


From the original questioner:
Thanks for the advice. I'll probably try the planer. The sun looks like it might come out this afternoon so I might first set them outside for a couple hours to see if it lessens the contrast. I can't flip it because it is a 4" X 4" post made of 4 sides with mitered edges. All sides have the same problem (some worse than others) but all sides will be visible when the project is finished.

From contributor K:
If the thickness cannot be reduced then I’ve found that reverse taping and allowing the untanned sections to even up. It's always a good habit to always cover your U.V. sensitive woodwork with tarps. I've found that even shop lighting can affect the tannins on these woods.