Determining the radius to aim for when creating a curve with vac-laminated plywood. September 23, 2003

Question
Is there a rule of thumb in how much tighter a radius to pull when vac-laminating plywood? I'm laminating two sheets of 4'x4' plywood to create a radius curve of 12'. I built a mold that was right at 12' and the resulting radius, when I released the vac-pressure, was just over 15'. Extrapolating, I'm figuring that my next mold should be somewhere between a 9' and 10' radius to get a release curve of 12'. Has anyone else done this? Should I allow for more relaxation when I go to a tighter radius than what was apparent previously? I'm asking prior to planning the next mold because there was a lot of time and no small amount of money involved in building the first one.

Forum Responses
From contributor R:
The problem probably lies in the number of plies in your lamination. Try going with thinner plywood and more layers. I'm a curved railing guy, so if you can give more detailed info I could probably help you. There is always a small amount of springback, but that is excessive.


From the original questioner:
I suppose I could go with more layers. Sure would simplify things if I didn't. Are you working with solid wood or ply and veneer?

From contributor R:
I use solids on curved rails but I use plywood for free standing curved stairs. I've even made quite a few curved doors, etc. If I read you correctly, you use two layers. This is inadequate unless you're attaching to a framework. I could go into greater detail, but I would need to know your application.

From the original questioner:
These are acoustic panels. They just need to be rigid but will have no stress on them once they are in place.

From contributor E:
I would guess that you are using either PVA or a pre-catalyzed PVA adhesive for these layups. These are thermoplastic adhesives that have "give". PVA's cure like candle wax.

If you use a urea resin adhesive, your springback will be zero to minimal. Urea cures like concrete.


From contributor R:
If they're in a frame you could get by with some trial and error. It's impossible to give an accurate rate of springback. That's a good point about the glue - different glues have different amounts of give, but keep in mind the reason for springback is the tension you put the wood under when you curve it. The thinner the wood, the less tension; the thicker, the more tension. Think about the wood itself as having the ability to flex with only two pieces of wood and one glue joint and the amount of tension involved - even if the glue doesn't move at all the wood can relax. With many layers of veneer there is little tension and each glue joint helps hold the next. If your panels were glued up using 1/8 plywood, say six layers thick, it wood be many times stronger and more stable than two layers of 3/8. There is always some springback. Sometimes it's negligible, but it's there. I know some really great ways to jig up clamping forms if you're interested. I could include some ways to allow for springback.

From the original questioner:
You made some interesting points about laminating more layers, thus making the end result stronger. In my case, doing what I'm doing it may not be practical. However, the point about using urea resin glue instead of PVA may be just the tip I need. I actually have some of the stuff but have been avoiding using it since if it gets on the bag it could stick and cause problems. Also I'm wondering about spreading it and cleanup afterwards.

1. Coat the inside of your bag with a glue release agent. They are totally neutral.

2. For clean up, dump the leftover into a box with sawdust. It will be a rock tomorrow, then you can safely throw it away with the trash.

3. Spread it no differently than PVA's.

4. Clean up remainder with hot water.


From contributor R:
Do the old plasterer's trick - get a big rubber ball, cut it in half, mix it in there. I'd be interested to see how you make out with 2 ply lamination. What's the radius?

From contributor E:
Inside method. Form/caul inside the bag. 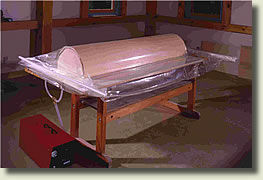 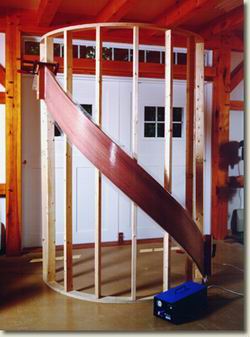 Outside the bag lamination 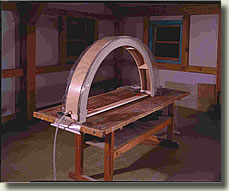 From the original questioner:
Contributor R, I was thinking more on the line of disposable containers. Something cheap but sturdy enough, like a heavy cardboard. I'll need to wash and clean up my glue applicator and any mixing tools as it is. Seems like there ought to be a source of containers like this, say in a one quart size.

Also, the radius I'm laminating to is 12ft.


From the original questioner:
It took awhile to receive the glue spreader in the mail and then other delays occurred. I made up two of the panels yesterday and was surprised to find that the urea glue really made little or no difference. There was just as much springback with the urea glue as there was with the white glue I used initially. In addition, the urea glue dries red (kind of looks like crystallized strawberry fruit leather) in color and some of it oozed up into the joint on the face layer of maple. With the white glue this wasn't noticeable but may be a problem now. The one good aspect of the urea glue I see is that the panels were more rigid and are more likely to hold their shape over time.

From contributor R:
The amount of springback is a function of how much tension the material is under while being clamped up. The more layers there are, the thinner the strips, meaning less tension, less springback - it's that simple. When I do a set of stairs I use thinner strips on the tighter radius to compensate for this. You'll probably have to go with more layers or attach a radiused steel or aluminum frame(?) top and bottom(?) to help hold it. I'm thinking out loud here…