Drying cracks in imported Beech blocks may be the re-opening of existing cracks, related to changes in atmospheric relative humidity. November 27, 2007

Question
We've purchased a good deal of European beech which is dried to 12-14%. However, whenever we work with it, we get a lot of checking (small cracks) on the ends. What causes this? Is there a remedy?

Forum Responses
(Sawing and Drying Forum)
From Professor Gene Wengert, forum technical advisor:
Are these freshly cut ends or the ends of the lumber?


From the original questioner:
The cutting was done in Bulgaria about 8 months ago, but they are only now being unpacked and the cracks are appearing after a short time exposed to air.

From contributor D:
It's not dry or, at least, not dry enough for your EMC. It needs to go back into a kiln.

From Professor Gene Wengert, forum technical advisor:
It is likely that you are seeing pre-existing end cracks that are reopening when exposed to the drier conditions that you have compared to the humid conditions in the container.

From the original questioner:
These are boxes (and boxes) of toy blocks, packed in cardboard cartons with plastic liners. I am wondering if putting an envelope of desiccant gel into the cartons for a while would lower the humidity a bit and lessen the shock when they are removed.

I do notice that these cracks tend to appear on the outside, exposed face (only) when these blocks are shelved in piles for repacking into kits - making me think that Dr. Wengert's hypothesis is right on the money. The humidity today in Indiana was about 30%.

The cracks usually (but not always) appear along what appear to be ray lines in the end grain. I am not sure, however, that these are not previously exposed cracks that are merely filled with sanding dust rather than radial rays. Anyway - a small disaster.


From Professor Gene Wengert, forum technical advisor:
Dry wood is twice as strong as wet wood, so it is much more likely that these are pre-existing... Dry wood requires more than just a few percent MC change in order to develop enough shrinkage stress to crack the wood for the first time. Nevertheless, it is possible to crack dry wood, but not likely.

From contributor B:
What type of work are you doing with beech that only requires 12-14%? I had some experience drying beech in the Republic of Georgia; it can be very difficult to dry without checking, although it is probably easier than American beech.

From Professor Gene Wengert, forum technical advisor:
Incidentally, if you had a wet core and it dried, that would make checks at the end, but in the core or center of the end of the piece, and not at the surface or through and through.

From the original questioner:
Well... the beech story is a little complicated. These are manufactured, unfinished toy unit blocks in various sizes and shapes - not lumber. They were supposed to be dried to 8% originally. However, we don't know how dry they were actually when manufactured. Then, to complicate matters, they were stopped on the docks in Newport News in November (2006) and sent back to Bulgaria due to unapproved pallets. Time passes. Finally we received them in early June. So they've been stored in plastic lined boxes, and in an out of containers since (roughly) late September of last year.

We're estimating the 12-14% by microwave drying samples and comparing the weight to the pre-dried weight. They may have reabsorbed some moisture and, in any event, they were packed in plastic liners inside of cardboard boxes.

Dr. Wengert's observation seems to hit the mark. They come out of the cardboard boxes with no obvious cracks, but when shelved for a few hours, cracks appear in the ends. Seems to be some sort of shock to the ambient humidity, which is fairly low here at this time of year (30%). Closer observation of the ends reveals radial rays kind of like what one would see in soft maple. I'm thinking that in some cases these are actually cracks that have been filled with dust when the sanding was done on the ends. The sudden drying of the ends in the lower humidity outside air results in the cracks reopening - or opening in the first place along what amounts to fault lines. Who knows?

The real problem comes with the idea of repacking them into kits for Christmas sales, shipping them around the country, and then having numerous defectives in the kit when they are opened. We can always replace these, of course, but it would be a trifle expensive and wouldn't do anything for our reputation, which has been built on selling first class, premium hard maple blocks. Best thing to do, I suppose, is bring a set home and let the rug rat play with them and see how many of them crack in the next month or so. Fingers crossed.


From the original questioner:
Here's a pretty good example. I might add that all of these cracks in all of the pieces are radial. 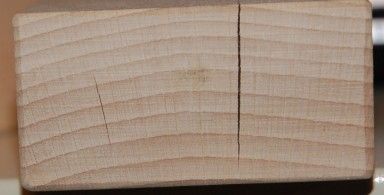 From Professor Gene Wengert, forum technical advisor:
The large size of the crack on the left is strong evidence that these are pre-existing cracks. The size seems too large for a change from 14% MC to 6% MC.

From contributor B:
It would be helpful to take MC readings with a pin meter, to see how wet it really is from the shell to the core. Not that it's my business, but why did you change from local maple to imported beech? Was the cost the biggest factor?

From the original questioner:
Good question. We didn't change. We still sell hard maple and more of it than anything else. At this point in time, the generally available blocks in this country are made of hard maple, birch (China), rubberwood (usually Vietnam and Malaysia), and beech (Europe). We just added the beech as an economy line to augment what we already sell and to extend our offerings. Big toy blocks like this are a luxury toy and quite expensive - so we needed something for customers that were shopping for something cheaper.