Question
I ran into an issue with some crown and was puzzled by the intersection. After a few minutes I came up with this joint. Can anyone see a better way in the future? 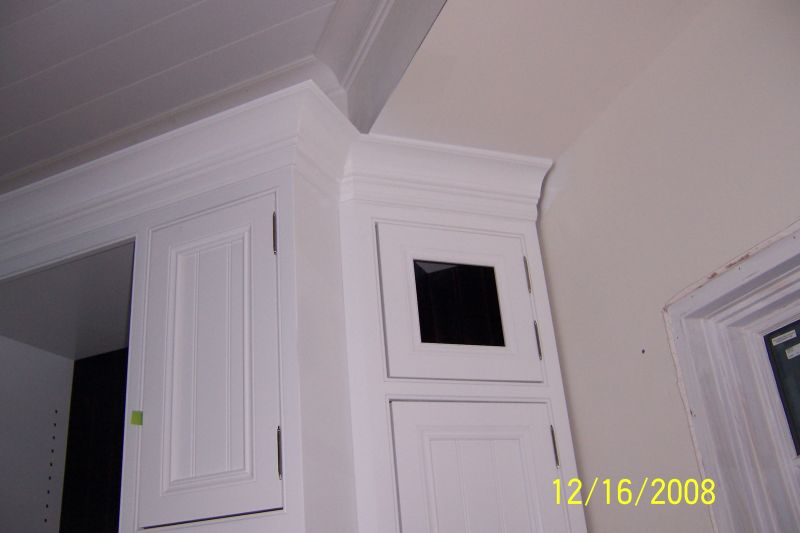 Forum Responses
(Architectural Woodworking Forum)
From contributor B:
Confused why you didn't just run that stile on that angle into the side of the cabinet? Why the flat? By the way, is that the finished install, or is it just sitting there not scribed and put tight against the wall?


From the original questioner:
The return on the frame was the designer's request. As for the spacing against the wall, it is for glass tile to slip behind for a very clean look when finished

From contributor B:
If there is no functional reason for it, not sure why the designer requested it. It doesn't do anything aesthetically for the piece, but the cabinet, which otherwise looks quite elegant, is choppy. I bet that tile will look nice when it's all in.

From contributor M:
Just another example of how designers don't always take function into account.

From contributor J:
There is no perfect solution, so I look to what will appear most normal. I might have applied a triangular filler block to the face frame of the side case, flush to the lower edge of the crown, thus giving the last section of crown on the right a straight shot to the short return piece. It would be a coped joint too.

From contributor W:
I would have added a soffit from the return out to the face of the left cabinet, therefore avoiding that ugly situation. I would still go back and do it.

From contributor R:
I would walk the designer over to that detail and ask them if that is how they envisioned it in their head when they drew it, or if they would like to incur the expense of redesigning it so that it looks correct. You did what you could based on what the designer told you to make. At that point it is the designer's problem to correct it or tell you to leave it.

From Gary Katz, forum technical advisor:
Now that's what I'd call making chicken salad out of...

Nice job! Bet it took longer than all the crown on that cabinet. And I'm with contributor R - don't miss an opportunity to educate a designer, especially with your tongue in your cheek.


From contributor O:
First of all, I have never been able to run crown horizontally and then up a rake. I probably would have made the right stile of the left cabinet wider and then run the crown on the lower cabinet around to die into the left cabinet, thus letting the taller cabinet's crown die into the wall naturally.

From contributor G:
I just installed a piece of dentil crown with the same problem and same solution. It took me rather more than a few minutes to figure out the intersection... so from my perspective you did good, and I don't think it looks all that bad, and I bet the customer is happy with the results.

And I suspect that the only other real solution is to separate the left and right cabinets so the crown terminates, or runs to the cabinet, rather than continuous along the top. My customer wanted continuous, there was a soffit on the right, and open on the left, just like your picture.