Question
I will be cutting some freshly harvested 20" diameter fir to be used for a post and beam timber framed cabin. The cabin will be a total of 1000 sq feet.

Forum Responses
(Sawing and Drying Forum)
From Professor Gene Wengert, forum technical advisor:
Let me suggest that having this much moisture in your shop will create all sorts of problems, including rust or corrosion of metal. Coastal D-F is often quite dry when first cut (under 40% MC), but even then you do not want that much moisture in your shop. Perhaps you can rent an 18-wheeler van and leave the doors open for venting and use fans to stir the air, etc. Contact the Oregon Forest Products Lab for specific advice.

Regarding MC, due to the low initial MC of coastal D-F, in the past buildings would use the timbers in above ground locations as is, and then let them air dry during construction. The checking that developed was considered acceptable. Further drying would occur when the building was closed and heat turned on, which would mean more checking and shrinking in diameter, and rarely some warp. To be safe, drying the wood to 12-15% MC would probably be wiser overall as the wood would change less in use.


From contributor F:
In my region in France we use a lot of Douglas fir for this kind of framing. Douglas fir has a relatively low shrink ratio, so it can be used undried in some situations.

Your beams can take a long time to dry, so I agree with Dr. Wengert's suggestion. But I think you should consider the following. For framing you should pay attention on these conditions:

If the framing is going to be drawn in insulation the wood must be dried to less than 18% MC because moisture can't escape afterwards, so fungus guaranteed!


For ordinary wall framing, the building time can be sufficient.
Be sure your client is aware that some cracks, splits and joints opening will occur later on.
Beware of heavily loading a green lumber frame because warping can be twice to three times as bad than if the same lumber were dried.

If you can, go with this :
Try to avoid having the heart of the tree in the beams, because this can cause split and also cause the piece to curve.
For posts, split can be okay (only compression). If you have the heart in a beam, place the beam so that the heart is in the upper section. The curve will go upwards and the compression side is more forgiving.
If the lumber must be dried because the above conditions are to be avoided, the best solution is glued lumber for those huge measurements (sorry, I don't know the proper name in English).
Here are two photographs of the roof frames in my workshop, made from freshly sawn Douglas fir. This is to give you an idea of what you can do with green Douglas fir if you pay attention to how to place the pieces. 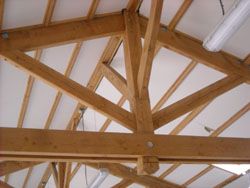 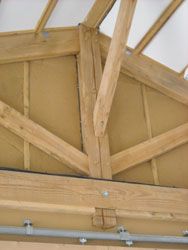 From contributor F:
A few additions…
We use a lot of undried Douglas fir for framing.
I meant the suggestion of using your beams as they are. (Unless fungus risky places.)
The building time can be sufficient if the building is roofed, correctly ventilated and you have something like 2 months to spend before insulating. Install exterior sheeting to avoid moisture gain from rain. Best is to check MC before insulating.
Never put undried wood (joists) in a masonry wall!

From the original questioner:
Thanks for your help. I was able to cut all of the beams that I need last week and I have them stickered, covered from the sun and air drying. Your post and beam work looks fantastic.