Holly stains if it's not dried quickly and properly. But what's the real cause? A scientist weighs in on samples collected by a sawyer. July 12, 2005

Question
Does anybody know the mechanism by which holly develops a blue/green stain? I dry a lot for a company that is supposed to be a major supplier. From the beginning, the owner has told me that holly is ruined by a fungus if it is not dried soon after cutting and if it is not dried rapidly in the kiln. I can dry it without the stain, but I still want to understand what causes the stain. I don't think it is fungus.

In the picture, the top piece is 8/4 that came out ok. Second from the top is 8/4 that was dried relatively slowly. The stain is in the center. The next piece is 12/4 and it shows a layer of stain under the surface, but the core is white. That one makes it look like the stain was at the drying boundary as this was dried in a vacuum kiln. The bottom piece is 8/4 with a streak of stain. Does anybody have any thoughts? 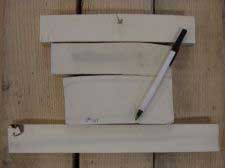 Forum Responses
(Sawing and Drying Forum)
From contributor D:
I've had great disappointments with holly, and have lost some magnificent wood to the stain. I've read that it is due to a fungus that rapidly spreads once the tree is felled. I've tried painting a stiff solution of boric acid on the wood before stacking, and still had stain develop. Success only comes with rapid cutting and stickering. I'm curious if anyone has a preferred bleaching technique that will remove or decolorize the stain from finished or planed to thickness holly, without yellowing the color of the wood?


From Gene Wengert, forum technical advisor:
It is my understanding that it is blue stain fungus.

From the original questioner:
Gene, the stain may be caused by a fungus, but there must be something else going on. The second piece from the top shows the stain in the center. I've been told that this is caused by slow drying. If the fungus isn’t killed fast enough, it grows in the center. But this was in a vacuum kiln and was dry in five days. If five days isn't fast enough, then you would never get white holly out of a conventional kiln. Are you aware of any research on the subject?

From contributor J:
How much delay from the tree being cut to the log being sawn? My understanding is that holly needs to be felled, sawn and into the kiln as soon as possible to prevent it going grey, preferably on the same day.

From the original questioner:
We try to get the wood into the kiln on the same day it's sawn in the summer. In the winter, we apparently have a few days. I have been watching some pieces cut from the same board that I have stored in a warm, a cool and a cold area. Not very scientific, but the warm pieces dried with a lot of warp but no stain. It's not white, but there is no definite blue/green/gray.

From contributor B:
The staining may be fungal, but from the photos I am somewhat skeptical. Do you know the initial moisture content of these boards, and the temperature at which they were dried? We have seen what would appear to be similar interior darkening in hard and soft maple and ash when the temperature is raised over 110 F while the moisture content is over 15 to 20%. Our laboratory drying research here at SUNY College of Environmental Science & Forestry appears to show soft maple to be more susceptible to interior darkening than hard maple. Perhaps holly is also sensitive in this way. Have you tried drops of bleach on the discoloration? If we find fungal hyphae through microscopic investigation, it will confirm blue stain or comparable fungus; otherwise it is enzymatic discoloration. Of course vacuum drying should result in brighter color.
Bill Smith
Wood Products Engineering
SUNY College of Environmental Science & Forestry
Syracuse, NY

From Gene Wengert, forum technical advisor:
When I was in Virginia 15 years ago, we did look at some holly that was discolored as the picture shows, and it was fungal. Certainly, chemical stain is a possibility, but we always found fungi present. I encourage you to send a piece to Bill and see what they find.

Chamber pressure limits wood temperature to less than 105'F as long as there is free water. In other species, I have observed wood temperature staying under 110'F until the moisture content is approximately 20%.


From the original questioner:
For the record, it was confirmed that no fungi was present in the stains. Some tests that I did showed that pigments that can't be seen in white wood can be moved and concentrated to become a green stain.