Hoses Failing on A Second-Hand CNC

An incorrect choice of lubricant may have caused hose failure on this previously-owned machine. April 15, 2013

Question
I spent the last three days replacing hoses on this machine. I have gone through 100 meters of 8mm hose, that's about half of all the lines. It is still blowing out lines every time I run it. I think I will just replace every 8mm and 6mm hose on the machine. Is this normal for a ten year old machine? Also during the homing process the z axis seems to hit the top end of the track and start jumping around. I haven't looked very closely at this yet. Several errors show after this happens. If I manually home the Z it seems to be ok.

Forum Responses
(CNC Forum)
From contributor M:
Your Z over travel limit switch is being made before the homing switch.


From contributor S:
If the machine sat not operating for a long period of time, then yes that's possible. However, I would be more suspicious of stuck valves than of leaking hoses. Changing all of the hoses is a major project.

From the original questioner:
Contributor M - that makes sense. Once I manually home it there is no issue. I’ll check the contractors.

Contributor S - the problem is not leaks, the lines are actually bursting. The incoming pressure is set to 7 Bar so the lines are not over pressured. Can leaky valves cause the lines to fail?

I’ve already replaced half the lines and we still can't run more than 20 minutes without a failure. In fact most of the lines blow while the machine is just sitting there not even powered up (the main air shutoff valve is missing). It looks like these lines are going to continue to fail. You can see how many lines I have already replaced (the blue ones). Some of them come all the way from the panel under the pod table and those are a major pain to replace.

Even though this machine is ten years old it has very low mileage. The company that had it before us never really learned how to use it. My guess is that the tropical heat and humidity here has compromised the PU lines, or the previous operators used the wrong type of oil in the FRL unit and it reacted with the PU. Have any of you heard of this happening before? 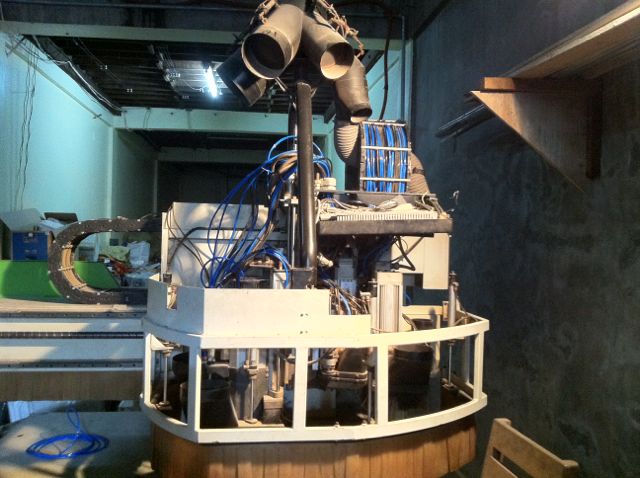 
From contributor S:
"Can leaky valves cause the lines to fail?" No. I operated a Rover as old or older and I never had problems with lines bursting.

"The previous operators used the wrong type of oil in the FRL unit and it reacted with the PU." Sounds like a good theory to me. We once had used edgebander that had a similar problem.


From the original questioner:
I had a brand new HolzHer bander that started blowing its hoses where they passed through rubber grommets in the chassis. It seemed like the oil in the rubber grommets reacted with the PU hose. Here in the Philippines guys are mentioning this is normal. I would think the heat and humidity can make it worse. I am not too excited about replacing these lines either. I just ordered another 100 meters of 8mm hose - I hope it is enough! I’ll let you guys know exactly how much hose is on a Rover 27 when I'm done.

From contributor M:
Definitely the wrong oil was used. The best and only oil you should be using is mineral oil. Mineral oil is safe enough to swallow and will keep those new lines working for 20 years.

From the original questioner:
I can use the mineral oil? In the documents from Biesse they list a specific oil that is not available here. I can't even find pneumatic oil for nail guns and our Dynabrade sanders. Can I use mineral oil for those as well? If they did put the wrong oil I would guess it would have been "3 in 1" oil, aka sewing machine oil.

From contributor V:
I've never used oil in the air system on any of our rovers. Three machines and 12 years running and I’ve never a bad valve or a bad airline. We only have a compressor and dryer, no oiler.

From contributor M:
Around 2006 all Biesse Rovers stopped having an oiler for the air system. If you have an oiler on the machine use mineral oil off the shelf at any drug store or pharmacy.