How a Cabinet Shop Fire Can Start

A cautionary tale of how one cabinetmaker burned down part of his shop. June 12, 2013

Question
Today I was visiting a cabinet shop and the owner recounted the story of how his shop went up in flames one afternoon. I will begin by saying this particular shop is among the most organized, well laid out shops I have seen. It would be the last shop I would expect a major fire or any accident to happen; but here is his account.

According to the owner, he had been spraying lacquer in the spray booth (room) most of the afternoon. When completed he was cleaning up and, as routine, was using a metal scraper of sorts to peal up the over spray from the concrete floor.

Suddenly, he noticed a small, black, smoking ring had developed in the pile of scrapings he had built up. He then took his foot and stepped on the smoldering spot which then split, jumped and multiplied into several smaller smoldering hot spots. Apparently, the action of scraping the metal on the concrete floor had caused a spark, igniting the small pile of debris.

Call in the GVFD!

They arrived quickly but not until after 25% of the building was ablaze and smoke, combined with super-heated air, was moving through the air lines to many of the machines in other rooms. As the super-heated air reached the drop-down ducts to each machine, the heat melted the ductwork. In the case of the planer, the heat also melted several internal parts including the spindle.

The fire department was able to contain the fire to about 25% of the building but additional heat and smoke damage affected other rooms. Fortunately too, the wind was blowing in a direction opposite the adjoining house or the toll could have been much higher.

He has re-built and is once again in operation. As they used to say on the old T.V. show, Hill Street Blues – “Hey, be careful out there.”

Forum Responses
(Cabinetmaking Forum)
From contributor J:
It does not take much. 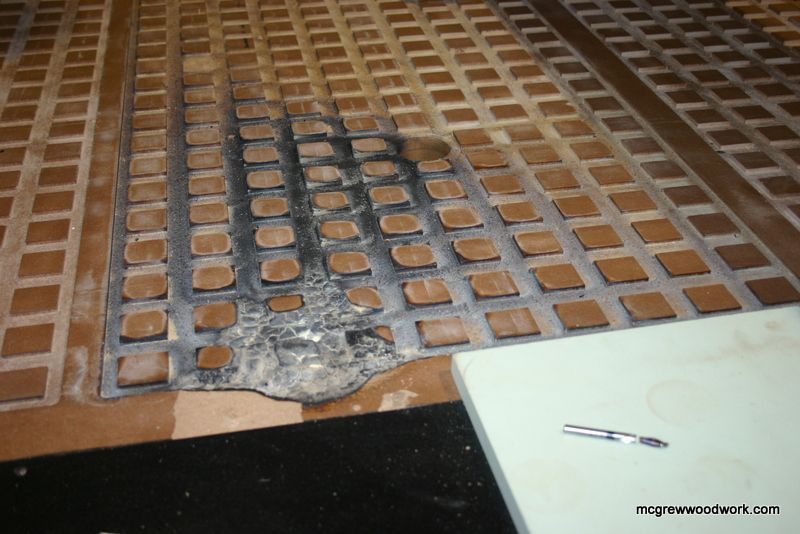 
From contributor O:
We had that happen years ago (no fire but a smoldering pile that we extinguished) and now we use non-sparking aluminum bronze floor scrapers from Fastenal.

From contributor M:
Thanks for the info. I do that very thing from time to time and never have thought about it starting a fire. One of our shop tables has a MDF top on it and several years ago I was doing some staining on that cart using a sponge and some Zar stain. When I was done I left the sponge on the cart and went home for the evening. The next day when we came into the shop it smelled like wires burning, I looked high and low trying to figure out what had been burning and couldn't figure it out. Finally looked at that cart and the stain filled sponge had gained enough heat and smoldered a hole through 3/4'' MDF. I no longer use sponges to stain with, by the way.

From contributor B:
I wasn't paying enough attention to detail a couple months ago and drilled a couple quick location holes in the CNC spoil board with a down cut instead of up cut spiral bit. I immediately noticed the holes smoldering from the compressed and overheated MDF dust in the holes. No damage, but it was definitely a wakeup call.

From contributor U:
People who spray lacquer without professional fire retardant systems should have their heads examined. They are a danger to themselves and those around them. It is amazing how usually fine thinking people continue to do this to save a buck. Even magazines such as Fine Woodworking are featuring articles of such short-sighted spray booth designs. I have asked several lacquer sprayers how they have handled the insurance side of lacquer spraying. I always get the same response, they have not reported this activity to their insurance company.