Question
I decided to do some brutal stuff to some cured TB III to see if their claims are true. I have to admit they impressed me. I glued up some poplar scrap from the cabinet shop, half inch thick by 4" square. I glued two of them side-by-side forming a half-inch wide joint. The other two I glued up on the face, overlapping 2" (leaving two inches per side so I can try to break the bond after testing). I boiled the pieces at the house for an hour and a half, and let them soak in the hot water for 3 hours. Then stuck them in the microwave for several minutes until I was sure they were nearly completely dry (I don't recommend you try this, the microwave now smells like blade-burnt poplar, I'm glad I didn't use lauan). After all that, even when steaming hot, the glue joint would not give. The wood split, but the glue was still tight. Bravo, Titebond. It's actually waterproof.

Forum Responses
(Adhesives Forum)
From contributor A:
I, too, have a set of samples in testing. These are out in the weather; edge glued panels, half laps and mortise and tenons. They are all made the same way from the same board, but glued with yellow glue, Titebond III, West epoxy and Gorilla. They are labeled and dated. They have been out for 3 months now, and no problems other than the edge glued panel with yellow glue - it is opening up on the joint line.


From the original questioner:
I'm partial to the Gorilla myself, except that they should do something about the foaming. A little is fine, but this stuff foams like an exploded can of whip cream.

From contributor B:
Try Visetite Plus. It is stronger than Gorilla without the foaming, and less expensive too.

From the original questioner:
You can't beat stronger and cheaper. I've read some info on Visetite and wanted to try it, but none of our local walk-in suppliers carry it (because it doesn't have a gimmicky primate as its mascot I guess).

From contributor C:
Denatured alcohol is what cleans poly glue up (before it's cured that is).

From contributor D:
I have not gotten up to Titebond III. The following test of Titebond II may provide a benchmark. After thirty-five years of weathering, a 2 x 12 stair tread of construction heart redwood split down the middle. Not expecting success I repaired it using Titebond II. It has withstood 8 yrs. of daily stomping stress and 20-30 in of annual rainfall and still is as solid as a new plank.

From contributor E:
I'm a boatbuilder, not an adhesives specialist, but like all the aliphatic glues, nothing in this world I know of will stick to them when it comes time to repair the work. If somebody knows what will glue over aliphatics, I'd like to know - otherwise it's all junk for my purposes. Here's my test of Titebond III. 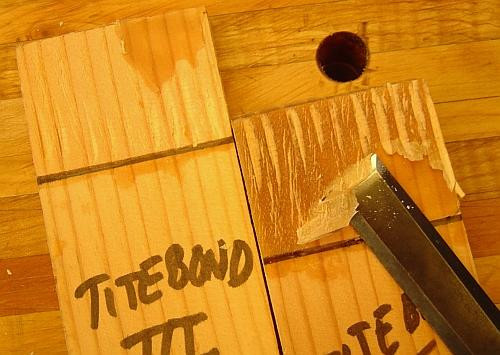 
From contributor A:
Science, not hearsay? Facts, not anecdotes? Revolutionary - I love it! Thanks for posting this great information.

From contributor F:
Yellow is a color, not a glue. Some yellow glues have cold flow and some do not. Some sand well and some do not. Some are waterproof some are not. The term "yellow glue" emanates from Franklin Titebond Original back in the 50s when it was the only yellow glue and had an excellent reputation .Since then, Franklin has developed a whole family of glues using the name "Titebond".