Question
I've been looking at miter saw stands and wonder which ones you prefer, and what drawbacks they have. I'm considering building my own. I already have the supplies to build one.

Forum Responses
(Cabinet and Millwork Installation Forum)
From contributor M:
Are you doing a stationary or a mobile stand? The answers will depend on which you mean.


From the original questioner:
I'm looking at a mobile stand. Playing with the layout on Acad; figure it's cheaper to make the mistakes on the computer.

From contributor J:
I got the Dewalt folding leg stand after much thought. It's solid with great extending support. Carrying it works better for me than trying to roll some wheeled unit over the rough sites I see. 200 bucks was good, too. I make that in four hours, so home built didn't make sense.

From contributor D:
I think you're wise in building your own. I made one as two pieces: a stand, and a platform with extensions for the saw. The stand is one of those collapsible steel sawhorses. I put a MDO top on it to mount the miter saw platform to (or a portable planer, Kreg jig, etc., or just use it as an extra work station at the jobsite). I'm going to mount some large rubber casters so I can roll it around.

The saw platform is a little wider than the saw is deep. One piece of ply runs the entire length, about 7 ft long. I made the extensions out of 3/4" ply in a torsion box type of construction with a 1/4" ply glued and stapled to the top. A 3/4" fence is even with the saw's fence. I drilled two holes on each fence for some star knobs and t-bolts that hold a sacrificial fence made from MDF. The MDF fences slide on t-tracks routed in the back. This allows me to always have a zero clearance fence to support the cut, no matter what. I also have t-slots cut in the extension tables going from the front to back so I can mount a jig to hold crown molding at the proper angle. I planed down some blocks to mount the saw to make it level with the extensions. I cut two handles behind the fences to make it easier to carry.


From contributor M:
I've got the Delta 50-155R Universal Mitre Saw Stand. It's not light, it's not heavy, but it is solid. The extension roller wings provide plenty of support, even when cutting 10' sticks. I happen to dismount the saw prior to folding up the stand and heading home, although you don't have to. I got mine a few years ago for around $150. Good investment, overall.

From contributor R:
I originally used the Dewalt folding stand, but found a couple of things I didn't like. The length of stock that can be safely supported is limited, the extension arms over time need repeated adjustment, the lack of fence and stop were definitely missed, and the rubber feet on the legs wear out quickly. I ended up getting the SawHelper Ultrafence from American Design and Engineering and have not been sorry. It breaks down and sets up quickly, comes in various configurations (lengths left and right of saw), and is very well built.

From contributor V:
I make my own miter saw stands. I haven't found any one commercially available stand that I like or that wouldn't be at risk of being stolen or smacked around on the job or in the truck. I use different setups depending on the type of work that I'm doing.
For cabinet installations I use a 6' x 18" table with supports at the ends and folding legs. It's light, cheap and portable and I can keep stuff like glue, block plane, sandpaper, cutting lists, tape right by the saw. For jobs with lots of running and standing trim, I have similar tables to the one above with 8' to 12' extensions to support the work.

If I am working in conditions that require a chop saw and lots of pre-assembly, like corridors of some healthcare facilities, universities, or retail stores I'll build a 4' x 8' or 3' x 8' rolling workbench/miter saw station, with a shelf underneath for offcuts, tools, jigs, and space on the workbench to clamp stuff and do assembly. This is an especially good setup for handrails. This works well if you don't have to negotiate many doorways and there's enough in the job to justify building one.

In the shop I have a rolling chop saw station about 3' wide with drawers and storage for blades and other tools and 2 removable 2' extensions. This will occasionally find its way onto the jobsite if necessary, but the unit with everything loaded is a pain to load and unload.


From contributor C:
Quite a while ago, I wrote an article in the Journal of Light Construction describing a sawstand design my partner turned me onto, and one I've used for many years (and a good carpenter can easily build it in less than two hours). One (of many) things I like about it is that I can screw temporary stops on the wooden top (sometimes I'll blow a finish nail or two to hold one in place). When you turn it upside down in the truck, you can store tools in it… and if your laborer backs the truck over it, you just make him build you another one. The entire article is available at the link below.


From Gary Katz, forum technical advisor:
The above stand is perfect: easy to build, cheap, and does the job. It's not that great for cutting long trim because the extension wings aren't long enough. But that's fine for stairs and lots of cabinet jobs. You can make the torsion box longer, but then it's tough to store in your truck van.

If you're cutting long trim all the time, I've found that continuous extension wings are a must. The Sawhelped is one of the best continuous-wing stands. I shy way from the ones with wheels. I end up having to carry them across muddy or dug-up jobsites too often, plus they take up too much valuable space in my van.

I made this stand years ago (have since made a new one), but it sure served me well. The extension wings are only 5 ft., so they store easily, but the fences slide out in both directions, on T-bolts. The Flip-stops slide on T-bolts, too, so I can cut different sizes of casing or panel molding (etc.) repetitively, without having to move a stop. The whole thing breaks down very quickly and is light enough to carry with the stand. 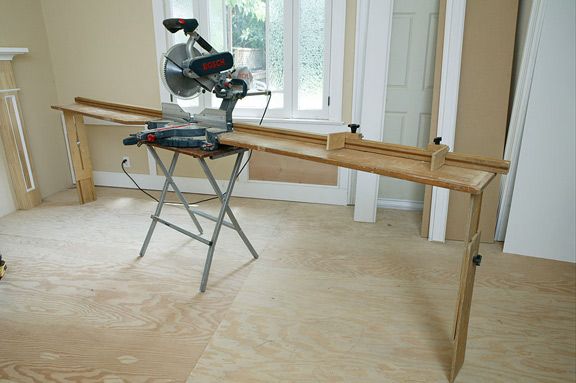 
From contributor I:
I think the choice of a chop saw stand depends a lot on what kind of work you do, how big the average house is, etc. My stand is an old B & D work mate, but my 8' extension wings are 1/2" plywood. I screw them to the back of my 1/2" auxiliary fence that is screwed to the chop saw fence.

They function as a workbench as well. I cut and nail my crown pilaster wraps with the crown upside down and leaning at the proper spring angle against the fence of the wings. I cope from the ends. I run beads on square stock clamped to the wings, plane tapered window mulls. I fasten quick stops to them with vice grip welding clamps. I keep my coffee in one of the cubbies next to the chop saw as well as smokes, combo square, pencils, spare tape and other stuff.

Mobile? I guess anything is mobile if you can pick the parts up alone pretty quickly. If you would ordinarily set up a workbench in addition to the chop saw stand - then I'd say it's pretty mobile. So basically, a chop saw stand is all up to the individual and what he needs.


From contributor B:
I recently saw a stand similar to the Dewalt, but it had some accessories available (a vise, work surface, and some others). It may have been from Ridgid. Pricey, but flexible. I have the Dewalt. One shortcoming of the design is that there is such a small support. Sure, it adjusts out about 8 feet, but do you want to keep adjusting it as you take small pieces off your moldings?

From contributor E:
I use the Festool Multifunction table as my chopsaw stand. (Got it as gift!) I also added wheels and a removable handtruck-style tongue to it so I can carry my Rousseau table saw stand and extension table on it in one trip. It makes a great workbench, too. Still need to build an extension wing system, so roller stands are it for now.

From contributor S:
I bought one of those 4" wheeled scaffolds from TSC. The first time my 708 Dewalt got put on it, it seemed such a natural fit, that it has stayed there for about 2 years now. I have thought about cutting the legs shorter to lower it a bit, but have gotten used to it instead. Right now I have a planer on the bottom shelf, that seems to have taken root too.

Comment from contributor A:
I use a 7' section of an old extension ladder, screw a piece of plywood to it, and block up two 1x10’s on each side of the miter box at the correct height. This leaves you with a shelf underneath to store saws, etc.