Question
I am replacing a damaged barge on a large Victorian house. This is the decorative post beams and brackets that hang from the gable end on the front of an ornate Queen Anne. The finished stock size is 5.5"x5.5". There is one 78" post which hangs on the center of the gable secured to the roof framing and fascia. Two 72" beams are mortised into the post on one end and secured to roof framing and a large bracket on the other end. The beams span the entire distance of the gable end. Two curved braces 65" long are mortised into the post on one end with the other end secured to roof framing.

I have four large mortise and tenon joints put outside 30 feet up to suffer the wrath of N.E. weather. The joints all fit super smooth with no gaps. Every joint is flashed with a lead cap. I am planning to use West System Epoxy as I like the strength and long set time, as well as some history with it.

The question is: should I use mahogany dowels to lock the tenons? I am thinking that I won't because the joints will be glued and finished in the shop and transported with lots of braces to keep the joints from stressing. I am concerned that eight 3/8" holes with endgrain dowels will eventually let moisture into the joints which caused the first post to rot. Any thought are welcome.

Forum Responses
(Cabinet and Millwork Installation Forum)
From contributor R:
If the tenons fit well and there isn't a ton of stress on them the pegs are probably unnecessary. They would help but not that much. Once it is up and in position any load is going to push the tenons in and hold them there. A good part of the time the pegs are just to draw the tenons in tighter.

From Gary Katz, forum technical advisor:
I agree. How much trouble would it be to install the pegs? Especially after all that mortise and tenon work? I think that thing is really called a truss. I installed 8-10 of them on a faux Victorian once - made out of Fypon. It was a slightly different installation procedure. I think the 'barge' is just the gable-end fascia boards.

From the original questioner:
Thanks for all the responses. I have tried to load an image of the original. I am not afraid of the labor involved in pinning the joints. It is that the original rotted out at the mortise and tenon joints. I want to do everything I can to keep water and moisture out. I may make some wedge shaped pockets in the joint which could be injected with epoxy during assemble. 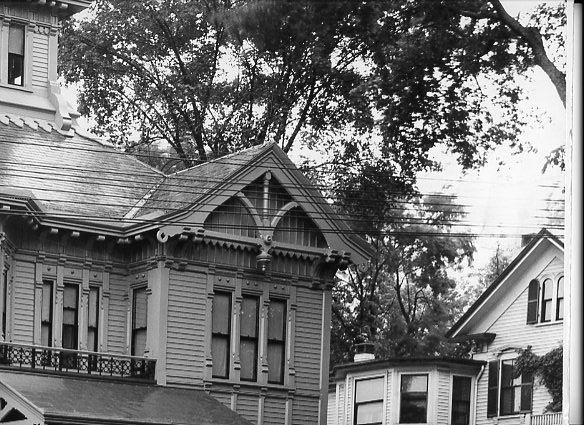 
From contributor R:
How you going to inject anything into a properly fitted mortise and tenon joint? It would be best to assemble it with your epoxy although that'll be a real mess. I'd go with Tightbond III for easier clean-up. These are pegged with nothing, just varnished, and have not moved in eight years. Granted, only the lower joints see any weather but they are the important ones and are good as new. 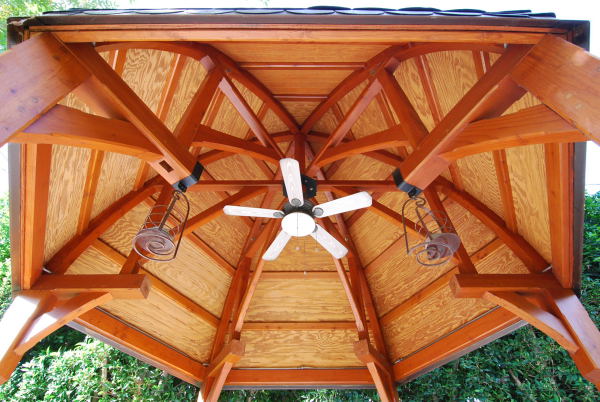 
From the original questioner:
Beautiful work and I don't offend very easy. Epoxy is messy but on the layout table it is manageable. The eight hour kickover time is ideal for gluing the whole mess at once. As for the injection, .062 hypodermic syringe into an 1/8"hole. The whole thing is painted so cleanup is not so critical. The original design let even the dew runoff collect in the crotch of the brace and the post.

According to the Russell Sturgis dictionary of arch bargeboards do refer to ornate gable fascia. Sloan’s Victorian Buildings (Dover Press) details a gable end with ornate fascia and a turned center post. They refer to that drawing as a detail of an ornate barge and its connection with the pendent at the apex. I narrowly escaped being correct again .