Joining a Rail to a Newel Cap

Question
I turn quite a few newels and balusters and occasionally turn newel caps to match the profile of my customer's handrail. How do you cut the pie shape out of the cap?

Forum Responses
(Architectural Woodworking Forum)
From contributor J:
Man, this is a tough one because of the size of the post; my gut feel was a cope cut, only other thing would be a big router bit and router. Either one of these, I think, requires a shop rather than a hand cut. I am sure there will be a far better answer than mine.


From the original questioner:
I am not talking about cutting the newel, but the pie-shape cut from the newel cap where the handrail joins the cap. I just posted the newel drawing so that everyone could tell what I was talking about.

From contributor D:
We do it with a band saw, and then pare the face with a sharp chisel to fit. If you have more than one (rare), center mount the cap on a jig sliding over the panel saw blade, rotate 90 degrees and make the second cut.

From the original questioner:
That's more of what I'm looking for with the exception that the pie cut is not 90 degrees. The angle varies with the diameter of the cap. How do you fasten the two pieces?

From contributor H:
We have done this often. After turning the cap, we cut it on the band saw, trim with chisel and connect with a rail bolt and glue. No need for dowels; mitre cut on rail controls joint. Wood thread inserted into cap, access hole and nut in easement. Connect first, then set cap and easement on newel. It's really that simple.

From the original questioner:
Okay. I have to admit my biggest surprise here is that you use a bandsaw. Hadn't really thought of that. I may start offering this connection as a service to my customers.

From contributor V:
Typically when we have this style, your first thought is to cut the rail at 45's and mark the cap. I have had no luck with this method. I have found that it will be more than likely between 30-40 degrees depending on the diameter, as you said. We also cut them on a bandsaw. This style is very popular in the Philadelphia area.

From contributor K:
Obviously, the angle is arbitrary, and is dependent on the outer part of the angle being the same width as the rail, and the diameter of the cap. The end or terminating point of the angle may be dependent on the accuracy of the profile that you turn, relative to the diameter. I think you may be able to pick that off by finding where the top of the easement hits the cap when leveled across.

You can do this all with measurements, without knowing the angles, because if you know the length of the sides of a triangle, the angles all take care of themselves, and will be congruent.

However, once you start to fit and pare the angle into the pie-cut, if the profile is different from the side of the easement, you may want to go back to the faceplate and tweak the profile of the cap, so the edges of the two profiles match up.


From the original questioner:
I believe the geometry of the cut can be seen in my picture. The width of the handrail, as you say, dictates the outside of the pie cut. The depth of the cut is 1/2 the width of the handrail. So a 2 1/4" rail will mean the cut is 1 1/8" deep as measured from the perimeter of the cap. The 1 1/8" is constant regardless of the size of the cap. So as the perimeter approaches a straight line, the angle will approach 45 degrees.
From contributor K:
In your first drawing, the side elevation above, it looks to me that the height of the rail at 1 1/8" needs to intersect the pattern at the fillet like it is drawn. If you shorten that angle like you just did, the point of your miter will be ending at a height above the pattern turned on the cap.

From the original questioner:
The drawings are of two different rails and caps. The rail in the top drawing is larger than the rail in the bottom drawing, but the principle is the same. If the rail is 2 1/4", the rail profile on the cap will not be deeper than 1 1/8" (unless it has been turned improperly), and so for the rail profile to match the cap profile, the cut should not be deeper than 1 1/8".

From contributor V:
I think this might help a bit. The handrail is a little bigger, but you can see how the rail is cut into the cap. It's not as easy as one may think. Even in my drawings, some of the profile points didn't hit right on. One other point of interest - the depth of the "V" in the cap should be laid out from the edge of the rail and not the center line. 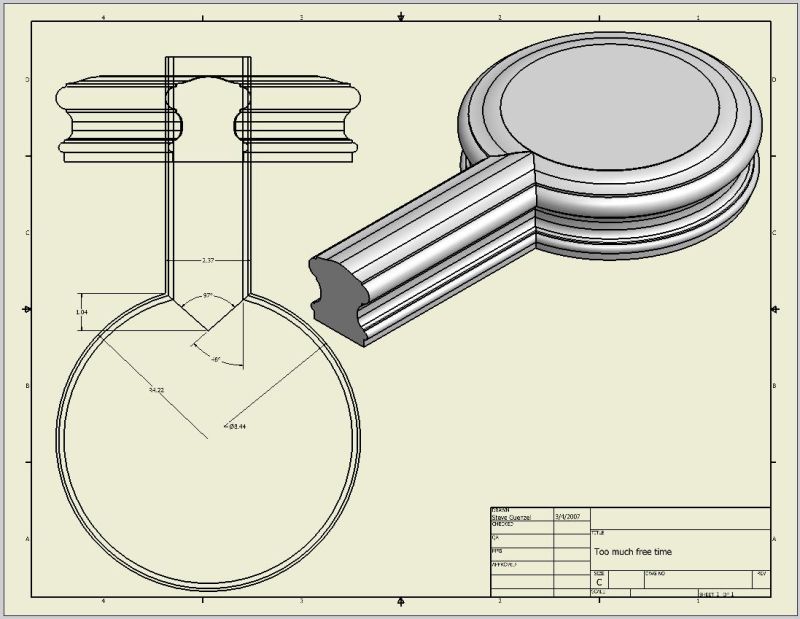 
From contributor B:
The following images show the miter in the ball of the newel and this was cut by hand on site. First cutting the rail on a miter saw, then marking the newel off the rail, cutting the ball with a backsaw and slowly refining the cut with chisels. This certainly is not as detailed as your newel, so I could fudge the curvature of the ball and rail with rasps. Leaving a little extra wood to play and refine is always a good idea as in tilting the newel outward with a press fit from the rail creates a snug/snap connection, then the fasteners are just securing that fit. Certainly the point of the miter does not coincide with center of the newel. 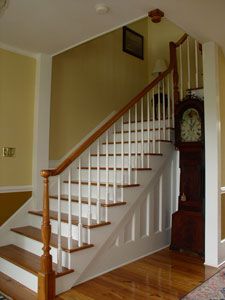 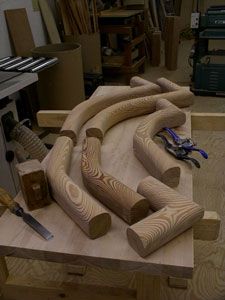 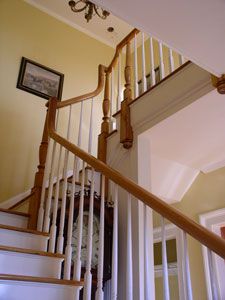 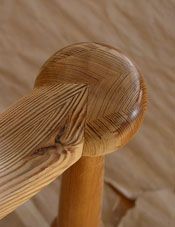 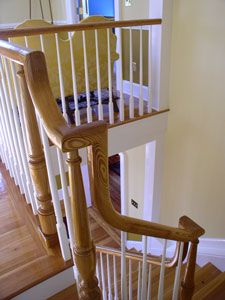 Photos and work by Bill Sams of JWS Joinery


From the original questioner:
Beautiful job. It looks like your handrail is coming into the ball at an angle. Is this right?

Thanks, contributor S, for the detail. I think if the cap is made correctly and the mitre is right the profile should all line up. Nice in theory, isn't it?


From contributor B:
Thank you! The rail and newel meet close to a horizontal plane as shown in the top picture. What might give a different perception is that the top of both the rail and newel are rounded, so there is no real top "flat" surface, so everything is tapering from and to the miter. There are a lot a variables that can effect the miter, i.e. how the rail is attached at the upper end, at what height, if the balusters are correctly cut and placed. I would reserve the final tweaking of the miter for the site work, just in case.

From contributor V:
You'll see that you can not get all the profile to line up perfect. It is close enough to work with some carving and sanding. I think the cap being a circle and the lines traveling different lengths around the circle throws off the final fit.

From contributor I:
Miter cuts work if the profiles match. I once, at the client's insistence, had to join a rail and newel cap of different profiles. After scratching my head, I had the turner make an extra cap, coated it with yellow glue and loose 60 grit abrasive, and chucked it in the drill press to use as a coping head after hogging out the rail ends with the bandsaw and gouges. I got an acceptable fit, though only because the profiles were simple curves in the area of intersection.

From the original questioner:
Wow, now that is clever. Pretty cool idea!

From contributor Z:
The pie shape will not be a straight cut. In the diagram, I did a simple mapping of the contour to the intersections of the inner and outer diameters of the cap and an arbitrary width hand rail of the same straight contour. The "V" cut in the cap will be concave (cupped) and the end of the rail will be convex (blunt). For the same width of rail, and inner and outer diameter of the cap, the shape of the pie cut will be constant - regardless of the actual contour used.

Rather than spending my hard-earned free time to come up with a rigorous mathematical expression for the shape of the cut (a parabola?), the band-saw cut and chisel-trim approach might take a little less time if you keep the basic shape of the diagram in mind to know where to start trimming. 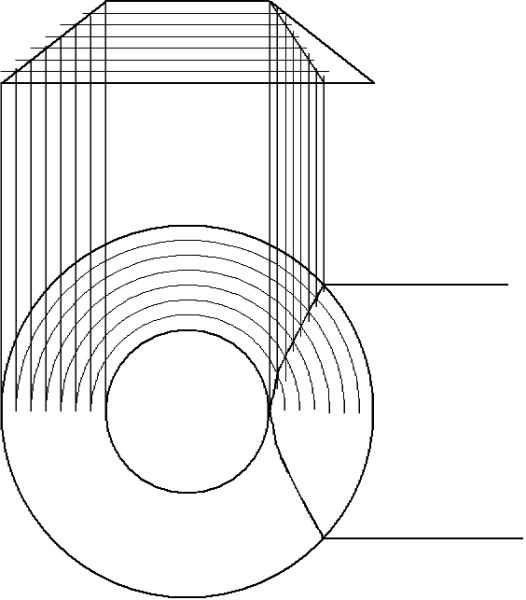 
From the original questioner:
I don't know that I understand how your drawing works, but intuition tells me you're right.

From contributor X:
Any time you mitre a straight molding to a curved one with the same profile, the true mitre's got to be curved (I know it's not a section of a circle; I'm thinking it might be a section of a hyperbola). You've got three choices: Make the moldings slightly different, so the true mitre is straight. Figure out the true mitre, and cut both pieces on the curve. Or cut a straight mitre so the edges line up and fake it. That's what we do with newel caps. We draw a full-size picture on 1/8" plywood to get the angle right - it's not 45 - and screw the plywood to the center of the cap. Then cut through it on the half of the line on the band saw. After the joint is assembled, we tune it up with sharp carving tools and sandpaper.

From the original questioner:
Are you saying that you mark the proper angle on the plywood and then fasten it to the top of the cap to use as a guide?

From contributor G:
I would be tempted to try some sort of holding jig on the sliding tablesaw with the blade tilted to suit your angle of cut. It works fine doing tread returns. But do let us know how it turns out!

Comment from contributor R:
I have always coped the end of the easing or straight rail that will receive the cap. Be sure that your coping tooling total diameter does not exceed the total diameter of the cap.