In this interesting thread, a furniture maker first asks advice on an extending dining table concept, then reports back after the project is built. October 19, 2013

Question (WOODWEB Member) :
It would be great if I could get some feedback and viewpoints on how to build the door below. The architect wants interior doors (approximately 30) of varying heights up to 8'8" with ship-lap run horizontally both sides, approximately 1/2" reveal between faces, and fir/cedar seen on all sides. Some doors will be hidden or invisible and the architect is spec'ing SOSS hinges to help with that. The walls surrounding will have the same ship-lap fir siding to make the door disappear. I think the door thickness would need to be 1 3/4".

My door making history is limited, but it looks to be a fun project. I'm thinking the only way to make a door structural is to add a plywood or MDF core. Basically the siding will be run horizontally on both sides. This leads me to my dilemma. If I do have an MDF core, how will I face the edges cost effectively? I would immediately edge tape it, but if I pattern bit to follow the profile on the other plane it will leave a rounded corner. There's no way I'm going to square each and every ship-lap corner with a tool. How would you fabricate 30 or so doors in an efficient manner? 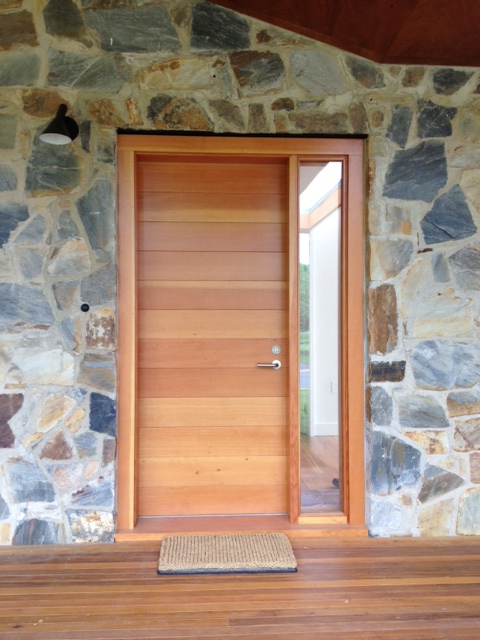 Forum Responses
(Architectural Woodworking Forum)
From contributor L:
You need heavy solid wood edges to hold hinges and especially SOSS hinges. Personally I would probably do horizontal grooving after doors where laid up and sized on my CNC router to eliminate tearing out the end grain. How thin a face material can you get away with?


From Contributor S:
First, suggest the architect switch to Tectus hinges. They are adjustable in three dimensions and heavy duty and suitable for good custom doors - top German engineering. Also, they will not sag after 20 minutes like SOSS will. Secondly, these doors can be built as ladder core with solids on the faces, but then I'd suggest T&G in place of shiplap to help keep the face flat. The end grain will be seen on the edges in the 5/8" or so horizontal faces. The other way to build is to do the faces in veneers and cut the false shiplap into the faces and some sort of core - MDF or similar. These could be a torsion box construction to save weight. No matter what, solid edging is a must for hardware and appearances, and don't use edge tape.

From the original questioner:
I did say edge tape. Let me also say there is no way I would edge tape a passage door. Sorry for the confusion.

Contributor L - The architect hasn't specified at this point what thickness I can use. They're looking for shop drawings for him to approve/disapprove. Shop tools are limited unfortunately, no CNC here. It would seem my doors would need to be on the thicker side to help accommodate for the shiplap.

Contributor S - Thanks for the hinge recommendation! Adjustability sounds great to me, especially because they're calling for 1/8" reveal lines. I think I'm following you on the ladder-build. Are you thinking 1 x 2 on the flat running perpendicular 1 x 2's every 10 to 16" oc? Pocket screw and face that substrate with the T&G but the edges? I don't believe the end grain from the fir will be acceptable. Dado the edges of the door leaving about 1/4" of the fir (faces), and then insert solid fir, flush trim. If I leave 1/4" of the face fir that will preserve the look of the door face. Now I need a really huge rabbet bit? I’m not keen on veneering but it’s a possibility. I like the idea of cutting the shiplap into the door. It’s also likely I could have a manufacturer make fir with an MDF core and band that?


From Contributor S:
Do a search here for "ladder core doors" and see what is in the Knowledge Base. Good info and discussions. Regarding your use of the terms flush trim and pocket screw, I am guessing you do not normally build passage doors. My standard response is that if you do not have experience building doors you should pass these on to someone that knows. These are complicated even for an experienced shop, much less for someone without direct experience in their construction.

What about warranties? How do you plan to keep these doors flat and true? You may just be the low bidder and unaware of what you are getting into. At any rate, a ladder core requires mortise and tenon joinery and some sort of press to be successful in quantity. The use of solids also requires the ability to read a moisture meter and predict wood movement accurately. A veneered door also requires press technology and other skills, and is by no means easier to fabricate. One or two is one thing, 30 is something else entirely.


From contributor R:
What's the seasonal expansion of that much wood? That door could lock itself in tight in the summer if you use solid stock, and that means no way could you hold 1/8" reveals all year round. I would build MDF panels with narrow solid fir/cedar inlay where each ship lap joint would appear. Then veneer, and cut through the veneer and solid with a v bit in a router to duplicate the shiplap joint. Be sure to ask the architect what time of year he wants the 1/8" reveal.

From contributor Y:
Wood movement with the huge expanse of solid wood faces is going to be a big issue. I would think you would want to accommodate any movement by a space for each and every face piece of wood to move. I would also use T&G as opposed to ship lap. A ladder core seems much better than a plywood core. The SOSS hinges seem like a bad idea.

From contributor K:
Just because and architect can draw it doesn't always make it a great idea to build it. If you use 5/8" on both sides, that only leaves 1/2" for a substrate to keep everything together and flat. About the only thing that comes to mind for me, would be some of the aluminum honeycomb core like is typical for use in jets. It is expensive, but very light weight, and very stiff. You will need to find a glue which stays flexible, like 3M 5200 and forget the ship-lap, you need T&G, KD, edge grain. If you don't get this right, this is the kind of job which will be coming back to bite you over and over until you are sick of it, and then some.

From the original questioner:
I really do appreciate your responses, very insightful. As a small one man shop with a family to support, I can't really afford anything to bite me later on down the road - much less 30 of them

From Contributor B:
The best advice I think I ever got was from a seasoned cabinetmaker who told me (as a young 20 something at the time) that you can't take every job that comes down the pike, sometimes you have to turn down work that's not in your skill set. I work alone also and have had to learn what types of jobs I can do and what I can't.

From Contributor T:
We do doors like this quite often. Our specialty is using difficult reclaimed woods but we can also help with contemporary materials. It is critical to create a balanced panel when building flush plank doors. Our method is similar to a stile and rail door except the panels are hidden under the skins. You will need a large press that has very flat platens. Our typical flush plank doors have a series of glue-ups that involve about four different steps. Try to make the outside boards/veneers as thin as possible; this will make them more stable. If they are thick like 3/4" then they will act like boards, want to move, and then wreck all kinds of havoc. Our happy compromise between veneers and boards is 1/4 - 5/16". We would be glad to help with the project if you need help. We ship all over, and even though it doesn't always appear so, we do work with virgin lumber, too.