Life Expectancy of Bearings in Spindles

Question
I am new to the industry and have been researching machines, software, etc. Something that came up in a discussion was the life expectancy of the bearings in spindles. I was told they need replacement after about 2000 hours of run time and it doesn't matter if air cooled, liquid cooled or what brand. They are all about the same. Does this sound right? How long does this take for turn around? How much does this cost? How do you normally do this, get a rebuilt spindle and swap them out? How does an ATC affect this process?

Forum Responses
(CNC Forum)
From contributor C:
Does this sound right? Run the spindle until it fails as the repair facilities that I have had dealing with will generally tell you there is no magic number of hours that a spindle must be rebuilt. I have seen some run a matter of a couple of years, and some that are almost a decade old and these are both the old metal bearing and the ceramics. I have had dealing with Omlat, Eurospindle, HSD, and various others and I can tell you, most customers will run the spindles until they fail. Very few will pull them out of service on a timetable.

How long does this take for turn around? Turnaround time is up to you. If you are willing to pay you can have some of these turn around in a matter of one-two days, if all parts are in stock.

How much does this cost? Average cost seems to be about $2500-$3500 but this is going to be dependent on the HP of your spindle, there are some of the lower, smaller HP spindles and it is easier to just by another one.

How does an ATC effect this process? None of these choices will affect your ATC, if all is connected correctly


From the original questioner:
I'm thinking it will be a 5 to 10 HP.

From contributor C:
Shoot for the 10hp spindle. It has enough power to go through most of what you are going to be working with, even aluminum or other non-ferrous materials.

From contributor P:
If you plan to drive aggregates rarely, a 7.5 HP spindle would probably be enough, occasionally then 10HP is the minimum. If you want to regularly use aggregates in processing sheet stock and solid wood, get a 15HP spindle. You need to have enough power to drive the tool fast enough to maintain a cool sharp edge. Your tooling company will help you figure the optimum feed rate and spindle rotation.

Keep in mind that you lose about 15-20% of your power when you change the direction of the output rotation, (a 90 degree aggregate changes from perpendicular to horizontal output). Having said that, bigger is better when you know what your production demands are for the future and can plan accordingly.


From contributor D:
We had a 9hp HSD go out in only two years, granted it turns big heavy cutters all the time. The second spindle I make sure to do a warmup cycle first thing in the morning. The manual says to, but no one stressed the importance. It has been running fine now for six plus years. Warmup cycles are very important and contribute greatly to the life of your spindle.

From the original questioner:
How about available RPM? Is 18,000 enough or should the spindles be 24,000? We plan to cut plywood and laminated materials, cut and carve hardwoods, do signs, lettering and engraving with hardwoods, plastics, aluminum, brass, glass, and tile if possible.

From contributor G:
To the original questioner: What is your procedure (time/rpm) for the warm up cycle?

From contributor U:
The RPM is really dependent upon the tooling you use, the material you cut, and how fast you want to cut. The materials you suggested don't really require a 24,000 RPM spindle. These are materials that you will have to cut through slower. You don't need a high RPM spindle for this or you will just burn out the tool and not use the spindle to the fullest speed.

The warm up time varies according to the spindle you have, etc. Usually just getting the spindle up to temperature prior to running is what you need. This will get the lubrication warmed up and able to flow around the bearings prior to machining. You can really just let the spindle spin for approximately two-five minutes to help with this.


From contributor G:
I typically just do the drilling first which is about 3000 rpm, which takes a couple of minutes, is my thinking detrimental on this? I think the first go-around on the spindle lasted about six-seven years.

From contributor Z:
The life of a spindle bearing is calculated with a formula that takes into account a number of factors that include operating speed, hardness of the bearing material, load on the bearing, and rating of the bearing. Woodworking spindles commonly operate at 300-400 revolutions per second (18,000-24, 000 rpm). This speed generates considerable centrifugal force causing friction and heat within the bearing. 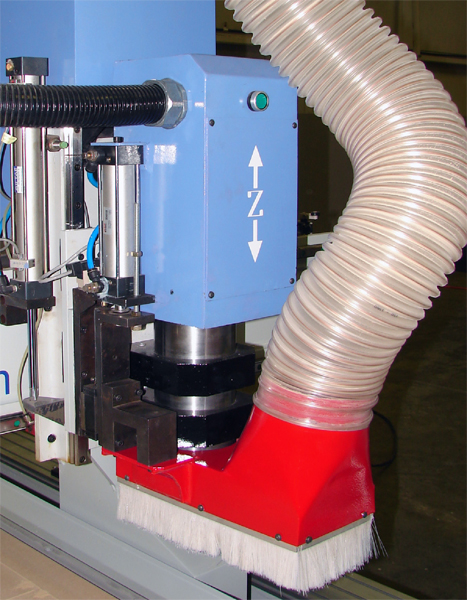 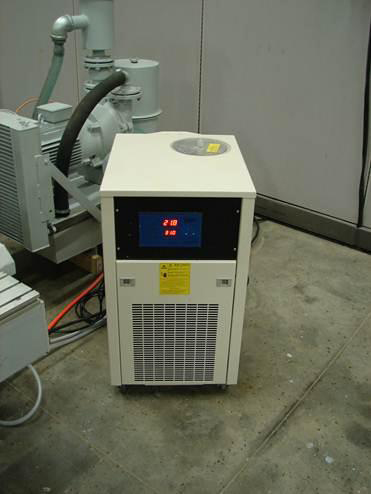 From contributor D:
I haven't checked the temperature of our 9hp HSD air cooled spindle, but it gets hot. I've felt the ISO cones as soon as a tool change is made after a long cycle and they're almost too hot to touch without getting burned. Incrementally ramping up the rpm from 1k to 24k over a five minute period is my method, which I also do after lunch or when the machine has been idle for a while. I do the same with any other spindles on the machine that I'll be using. This was a method a tech showed me years ago that he swears by. It absolutely should be done on cold winter mornings.

From contributor C:
In my experience, air cooled is the most reliable and the one that requires the least amount of attention. With liquid cooled this one may be the most effective method, but it is also the one that is most overlooked, when it comes down to someone checking the cooling unit:

1. Filters on the cooling coil packed with material.

3. Not checking that you even have cooling water flow in to your chiller.

4. Yes, you have to flush and change the cooling medium. It gets old just like your car antifreeze does.

5. Oh and the best one, I didn't know it had a spindle chiller, is that what that is back there.

Yes the last one actually happened. My preference is air cooled, just because so many people forget about the chiller maintenance.


From contributor Z:
You raise several good points. In the case of new CNC, we agree that relying on a busy machine operator, or even busier business owner to monitor the spindle/chiller operation is an ill-conceived plan. Instead we let the control do all the monitoring. Should the heat exchanger become loaded with dust, the temperature of the liquid will rise.

When it rises more than two degrees above the set temperature two things happen. First the chiller unit sound an alarm, second a screen pop up on the control with instructions (text, pictures and a video) for how to clean the filters. The machine will continue running the program in progress but will disallow another cycle until the alarm is cleared.

We also monitor the flow of liquid. Should the coolant level drop enough to limit the pressure in the system, both an alarm on the chiller and a pop up instruction to clear the alarm will occur. As a side note we also monitor the load and temperature of the spindle.

We do recommend that you change the fluid every 10,000 hours of operation. Here again we have the control keep track of the hours, and signal when it needs to be replaced. It’s true that owners forget that there is a chiller back there, but that’s how it’s designed.


From contributor Y:
I have four Biesses and have had bearings go on two of the spindles. I push these machines to the max, all day, every day. I am not a rocket scientist but have always been able to repair the spindles myself. It has always been the top bearings that fail and never the bottom. The local bearing dealer carries them off the shelf and they have never been a problem to source. The spindles I have done these to have lasted three-four years each time after bearing replacement. Bearings cost about $200 a set. Time to dismantle and replace is about three-four hours.

From contributor T:
I have a spindle that's liquid cooled which has been replaced once already under warranty. I am ramping into the part at a 45 degree angle at 100 inch per minute them machining the part at 250 inches per minute.

I marked the BT holder and the bottom of the spindle before I started the process once finished the marks were no longer lined up the BT holder spun inside the spindle about 22 degrees. However it's possible that it rotated 22000 there is really no way of determining how many revolutions it made while machining this simple 12" x 12" x 3/4" part. Now because the BT tool holder is spinning in the spindle when the machine goes to tool change it causes the tool changer to hang up.

From my experience metal rubbing against metal causes friction which creates metal dust. This metal dust is enough to stop the draw bar which lightly taps the BT’s retention know along with a blast of air to release the to its storage position. I was told that the way around this was to adjust the spindle chillers temp that could be as tight as up to a four decimal place increment and that ambient temp has nothing to do with it. Which is great considering my shop is located in Phoenix, AZ and the temp in my shop can swing 30 degrees within the same day.