Machining and Gluing Challenges with Ipe

Here are a few tips and cautions about working with Ipe wood, especially the difficult problem of achieving a lasting glue bond. October 11, 2012

Question
We are getting ready to cut a bunch of ipe, most of it is 3-1/2" thick. I have done some research but wanted to hear from anyone who has worked with it before. We will be drilling, cutting on a bevel, gluing, routing (CNC and hand held) and sanding. I will sub part of this out to a timber framer but wanted to be able to give him some useful information. I will be doing the gluing.

Forum Responses
(Architectural Woodworking Forum)
From contributor P:
It machines very well. Twist drills need to be cleared often in deep holes or the flutes load up, overheating the drill. It does not sand real well. Gluing is an issue depending on the joint. Eventually most joints will break apart unless they are mechanically joined with tenons, etc.


From Gene Wengert, forum technical advisor:
I agree with the gluing comments and would add that if it is treated like teak when gluing, you will have a much better joint. Make sure to predrill screw holes. The wavy grain can make machining quite difficult with overheating common. I understand that the dust can cause contact dermatitis in some folks.

From contributor A:
Contributor P and Gene are spot on. It can be glued with the typical teak method. However, it is extremely important with ipe to abrade it if using epoxy. It is so hard that it polishes and the glue will not stick at all. It machines kind of like plastic. We had to freehand a bunch of curves on the shaper for a fancy pergola. It cut perfectly. My boss was mad because it stained his white beard for about a week. The dust makes my throat burn and it hangs around the shop for a while.

From contributor G:
Hangs around? I would say clings to everything and it coats everything! It does machine nice with sharp tooling. I made a table with epoxy and biscuit joints, wiped with acetone before glue up, and it failed within a year. I will have to clean up the parts and re-glue and I plan on using a water proof PVA next time. Thankfully this one was for me and not for a client. It really doesn’t look good to me at this point and I'm glad I did this as a prototype first. One more thing, it has a tendency to move quite a bit. Now all this is true for the ipe I used but there are actually quite a few species marketed as ipe. 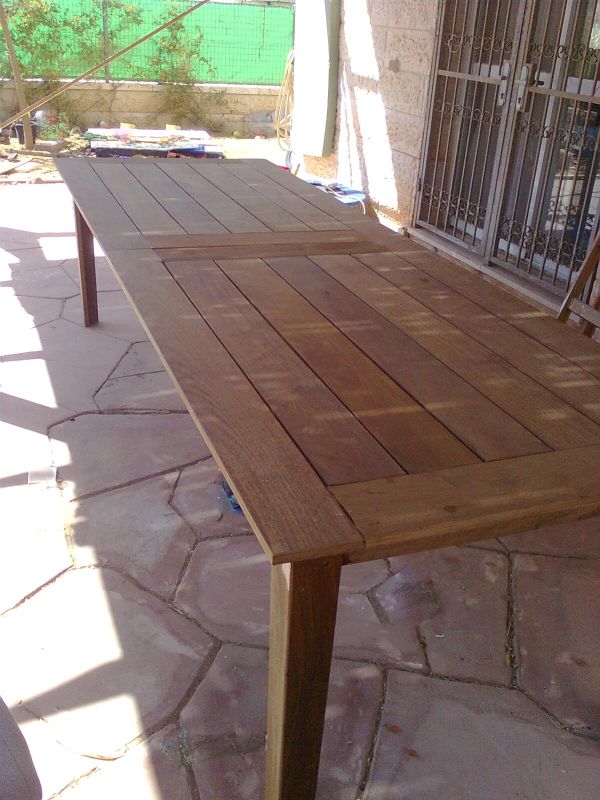 
From Gene Wengert, forum technical advisor:
Remember when using epoxy not to use much pressure as the epoxy joint must be thick. PGA pressure is too much. Also you must use epoxy that is stabilized for uv, otherwise rapid failure.

From contributor S:
I believe that success in gluing ipe is dependent upon what exact species of ipe is being used. As I understand it, what is sold as ipe is several different species, all with similar characteristics. The main difference to us is that some species apparently glue fine, while others resist glue and fail before long. I have nothing further to offer as far as what species work and what doesn't - I just avoid the stuff, and certainly don't glue it. I have seen more failures - some spectacular - that I have success.

From contributor A:
I believe that most epoxy joint failures are caused by lack of abrasion. As woodworkers we are used to taking boards out the planer and laminating them together. If the wood is porous enough the epoxy may soak in a bit and give a reasonable bond. However if it is dense like maple or ipe it is a pure mechanical bond. The epoxy needs tooth and more volume than pva. You really see this happen when building things like laminated arched door jambs. The veneers must be sanded if you use epoxy, they will be fine out of the planer if you use pva.

From contributor M:
I have worked with ipe extensively with historic building restoration using ipe to replace old growth pine in commercial store fronts from the 1920's. After more than a dozen different methods failed over time I have concluded only mechanical methods should be planned on. I have tried every method mentioned in previous posts. Maybe small joints will last for a while but joints in 2x6 or larger material will fail surprisingly fast. Movement/shrinkage is an additional problem to the oiliness and hardness.

From Gene Wengert, forum technical advisor:
I suspect that the roughness increases the joint thickness for epoxy, which is helpful indeed, as many folks use too much pressure. Even with high pressure, you cannot squeeze adhesive into the wood's cellular structure, however. Unless the wood's surface has been heated or burnished, there will slays be a chemical bond. However, the sanding does increase chemical bonding in most cases.

From contributor Y:
I would be very leery of any job that required gluing of ipe. I have yet to hear of an example of where any glue joint held up over time. You either use a solid piece of ipe or my secure it together mechanically. It's a pretty amazing wood and works well but gluing inevitably results in failure.