Question
I just recently finished rebuilding two Husqvarna 394's to power a double powerhead chainsaw mill. I bought the 56" Alaskan mill kit from Baileys, with three extra chains. I went to use the mill yesterday, and the chains were too long. The tensioners on both saws maxed out, and the bar ends are hitting the bar mount studs on both saws. I called Baileys and they're sending me new chains - 194 drive links instead of 200. Has anybody else ever had this problem?

I have two 3' diameter white oaks, one with a double crotch about 5' wide, and two walnuts - one 4' wide at the stump and the crotch, the other about 30" in diameter with a crotch down the whole thing, also covered in burls! I was so anxious to cut these logs!

Forum Responses
(Sawing and Drying Forum)
From contributor M:
If you swing by your local saw shop, they should be able to remove 6 drivers from the chains for a few dollars. It will be much cheaper than getting new chain. Also with a chisel, hammer, and some master links, you could do it yourself.


From the original questioner:
All the local saw shops of various brands claim the ripping chain is different and that they won't mess with it. I'm not paying for new chain - Baileys is just sending me new chain and a call tag for the old ones. I can't do it myself without the right masterlinks.

From contributor J:
Have Baileys send some master links with your new chain.

From contributor B:
What I did and what I recommend is buy their 25' spool of the chain you use and get their spinner/breaker combo and you can then modify/fix and make your own chains as you see fit. Break one in the middle of a cut - go fix it. I mounted my spinner and breaker on opposite ends of a 1'x3' piece of 3/4" plywood and just clamp it to my bench when in use. Otherwise it hangs on my wall out of the way. Get extra drivelinks and tie straps.

Also, the guys at the sawshop that won't touch your chain because it is ripping chain are dunces - it is the same chain, only the tooth grind is different - no big deal to fix it.


From the original questioner:
I talked to four local shops and none of them would shorten it. I see nothing special about it, except the grind, so what's up with these morons?

Thanks contributor B, and do you have a chainsaw mill? I am not new to sawing, but new to chainsaw milling. Baileys says that they aren't even sure if they have sold one of these mills to somebody actually using two powerheads in the past few years. I don't understand why it isn't more popular, because wide lumber holds high value on specialty markets. Maybe I'm lucky, but I have no problem coming up with enough logs over 30" in diameter to feed the cost of the chainsaw mill.


From contributor W:
My guess, and it is just that, is that shops want to avoid any potential liability issues should the chain fail in use. Not saying it will, but the fear of such a failure could be enough to prevent a shop from working on a long chain for a mill with 2 power heads.

Shops are funny, not necessarily humorous, when it comes to the unfamiliar. I picked up a chain today that was not what I ordered - I specifically asked for a skip tooth configuration, but the guy placed the order based on the 108 driver specification - totally ignoring the cutters. I pointed that out to him today with the old and new chain next to each other, and what do you know, there was a mistake. The new one will be available in a few weeks.

I didn't even bring in the rip chains I have - he was overwhelmed with 108 drivers - no telling what he would do with a chain that fits a 60" bar.


From contributor Y:
I would say it's a liability issue. That chain can take a big chunk out of the operator if and when they break. I have seen where chunks of chain have hit the bulletproof glass on faller-bunchers. It ain't pretty. Some almost penetrated.

From contributor B:
I have a Logosol M7. It came with a Stihl 066 and I have also acquired a Stihl 084 with a 42" and a 52" bar. The picture shows the 084 with 52" bar slabbing a big live oak trunk (made a coffee table). I had to build the over-arm contraption to hold the tip level. I use it on all my long bars. One powerhead works just fine. I see no need to have two unless maybe cutting with an 8' bar. I saw one set up to slab big bald cypress logs and it had two Stihl 090s. He was having trouble keeping them running...? 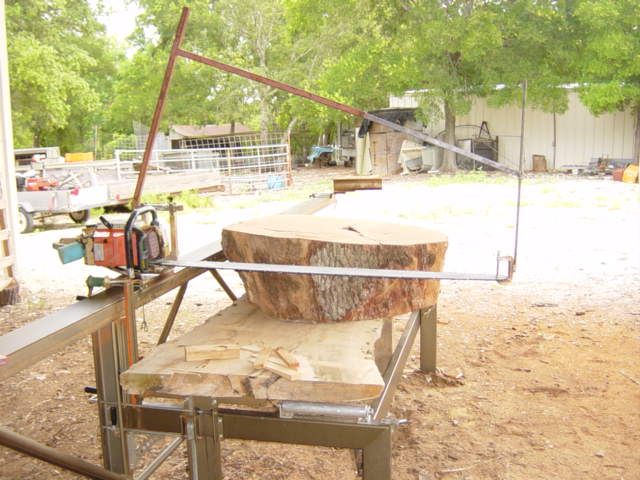 
From the original questioner:
That contraption doesn't look very stable, and it looks like you're adding weight to the tip of the bar.

I found another saw shop that is only two miles from my house, never even knew it existed, and the guy is familiar with rip chain. He changed the four chains to the correct length and charged me two bucks. I had to pay him a bit more!

The mill itself ran okay. One of the 394's crapped out, so we hooked up a 395xp, and we ran it for the day cutting 50" wide (maxing out the mill) double crotch white oak slabs.


From the original questioner:
I guess looks are deceiving then. It cut very well and is very stable. The long bar droops about 6" and above the c-clamp on the bar tip is an all thread rod that I adjust to pick the tip up and level it out. I got four 50"x 42" slabs out of the block on the mill. The first cut took the uneven part off the top. Live oak is a white oak and the saw handled it very well. 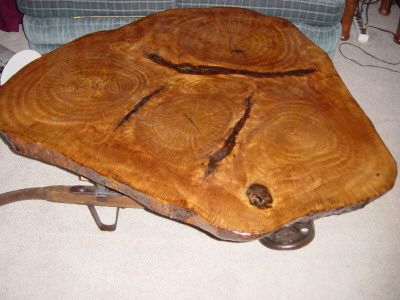