Question
What do you use to mortise fence posts for rail type fencing? I hope there is a nifty little tool to help, as I do not want to do them all by hand.

Forum Responses
(Sawing and Drying Forum)
From contributor A:
I don't recommend this method because of the safety issues, but I drill the posts with a 1.5" self feeding auger, at the top and bottom of the hole. I then use a chainsaw (very, very carefully) to clean out the sides. I clamp the post down on the ground, and stand to the side.

There is also a tool that some call a twivel, which sort of looks like a hatchet with a large hook on the back, to lever and split out the waste. Looks pretty cool, but I've never seen one in tool shops or antique catalogs. I have thought about forging one, but I haven't yet.


Contributor A is talking about a tool called a twibil.

From Websters:
Twibil
Twi"bil (?), n. [AS. twibill; twi- (in comp.) two + bill, bil, an ax hoe, bill. See Twice, and Bill a cutting instrument.]
1. A kind of mattock, or ax; esp., a tool like a pickax, but having, instead of the points, flat terminations, one of which is parallel to the handle, the other perpendicular to it. [Prov. Eng.]

To use a twibil you hold the handle with one hand and push the bits into the wood. The reason for perpendicular bits is so you don't have to change body position to clean out the mortises.

Now, on to your original question: how to mortise fence posts for a rail fence...

Contributor A's method sounds good to me (unless you happen to have a chain mortiser hanging around doing nothing). Alternatively you could do more drilling and use a slick or other large chisel to clean out the mortises (don't suppose you have an over-arm router either, eh?).


Your question brought back fond memories. During the 80's, I decided to build a mortised post and rail fence along my road frontage.

I live in Southern Indiana, so went out looking for local trees that make good posts, like white oak, sassafras, ERC, and locust. I wanted hefty posts - not these skinny cedar posts you buy at the local home improvement store. I would qtr 14 -16" trees. Most of my rails were split from red oak. I'm sure old Abe L. would have been proud.

With hefty posts, I had enough size to make my mortises by doing boring cuts with a small chain saw. I used a small saw and bought the narrowest bar I could find, that had a regular hardened tip (the star wheel tips turn too fast and are more prone to kick back.) I would cut the sides of the mortise first, then cut the tops and bottom. I would start the saw on a 45 degree angle and then tip the saw up as I bore into the log.

I think the secret was running a very small chain and slower speed bar tip.

I can only ditto the safety concerns that contributor A stated. His method of boring two holes would be safer. I was a lot younger and dumber then... and from the safety aspect would not recommend this. But I can say that this is how I did it.

My fence turned out great and was pleasing to look at. That was 20 years ago and posts have since seen better days, having fallen prey to humid summers and termites. I am tearing down the last of my fence this summer. Would I do it again? Sure. Here's a picture of the fence: 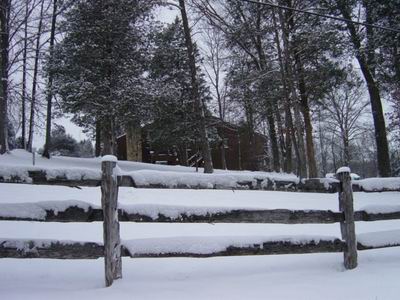 I don't blame you. If you have access to a 1/2" heavy duty drill with a 2" to 2.5" bit (I know the one fellow suggested a 1.5" auger but I like bigger since there will be less work to whittle down the rail ends) and a Sawzall, you are in shape. You'll have nearly the speed of the chain saw approach with the relative safety of using hand tools to make your holes.

Drill your two holes. Now, either eyeball the line on the edge radii from bore hole 1 to bore hole 2, or get fussy and use a straight edge, as it makes no difference to us. Draw a line. Cut along the lines and you have a mortise, which at 30', nobody will know that you were aided by the power tools.

If you don't have access to, or more importantly, don't want to spend the money for the big bore drills, make some smaller holes big enough to get a Sawzall blade through near the ends where the radii of your bored holes would be. You just have to fuss a bit more with the Sawzall and the radii of your holes may look more ragged.