Advice on sawing and drying crotch wood, with a view to managing warping and splitting. January 28, 2014

Question (WOODWEB Member) :
I have a seven foot piece of black walnut log with a crotch that I would love to cut slabs out of to make some bench tops. I anchor sealed the ends and set them off of ground for about 18 months now and they still have bark. Do I need to be concerned about the crotch grain splitting, and if so how do I prevent this? Also how thick should I cut for bench tops and how long to air dry? I live just north of D.C.

Forum Responses
(Sawing and Drying Forum)
From Contributor X:
Walnut dries easily and pretty much trouble free. However, the crotch wood in all species will want to crack due to the crazy grain patterns. I always seal all crotch areas with a thick coat of log sealer. On species that are known to move a lot I allow the first coat to dry and apply a second coat. Walnut will not crack badly or at all if you coat it like that to slow the drying process. But if you've allowed them to dry unsealed for 18 months already, I would venture they have cracked about as much as they're going to. However, if all you did was knock the slabs off and they are in the form of one or two real thick flitches right now and you resaw into say 8/4 to 16/4 they will still be very wet. Those new faces will want to crack as much as the day you knocked the slabs off, if in fact that's what you have done. So in that case seal them as I described when you resaw them.

I like my table tops no less than 8/4 and unless it's a massive size no more than 10/4. With walnut being such a friendly species to dry, you don't need to resaw the flitches much more than your desired thickness say maybe a 1/4" at the very most. For species that are notorious for movement while drying such as sweetgum or oaks for example I resaw at least an inch more than my desired finish thickness because they can move so much to amaze you. You need to be familiar with the particular species and allow for worst case scenario. Mesquite, eastern red cedar and a hand full of other species I never saw over size because those species are rock solid stable. Know your species and your desired final thickness and then saw your slabs according to that.


From the original questioner:
it has not been cut yet. I did seal it about a year ago. I'll go ahead and coat the ends one more time. I should get three or four slabs at 8 or 9/4.

From Contributor B:
I've had good luck drying crotch wood cut on my portable sawmill. A lot depends on where the crotch wood comes from. If it is from the main stem, you'll probably be ok, but if it is off a branch there will be all kinds of stress in it, and no amount of end sealer will help you! Here is an example of wood from a branch. Your have to do something like this now and then or you never learn! 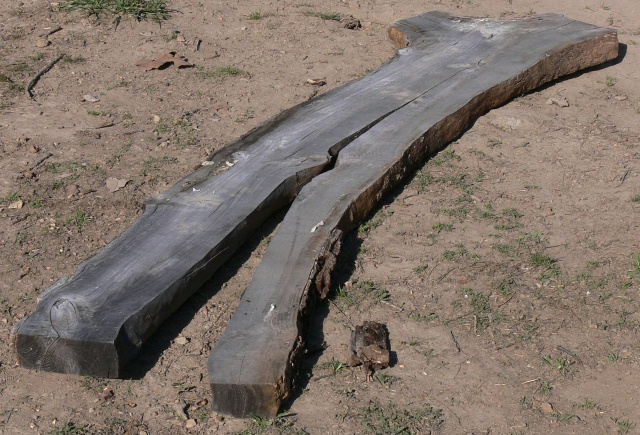