Question
Is there any kind of coating that can be applied to the glass covers on these lights so the overspray won't stick to it? There are lights on ceiling and 10 running on the walls. Obviously, the ones nearest the filters get the most overspray, but they all get some. I was thinking of some kind of liquid protectant that is not silicone based. 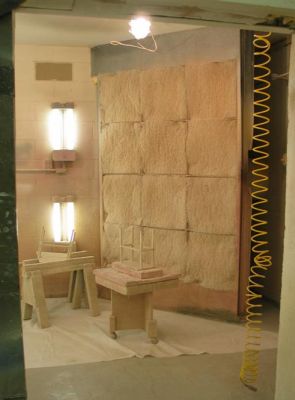 Forum Resposnes
(Finishing Forum)
From contributor C:
I have to tell you that my suggestion is experimental. That is to say that you'll be the first to try it. (:-) I would suggest olive oil. It is a non-drying oil, so a coat should wipe off, taking any overspray with it. It is pretty much non-toxic (even delectably edible). I use it to soak brushes that would otherwise be hard before I could wash them. It works great for that. You could spray it on, but wiping it on is probably safer. Sam's Club has it in half gallon sizes for very reasonable prices. Let me know how it works.


From contributor L:
The lights will probably get hot enough to smolder the olive oil and make a big stink in your booth. Unfortunately, I have no suggestions to replace the olive oil.

From contributor J:
Instead of coating the bulbs, how about attaching a piece of clear lexan or plexi in front of them? You could then just use clear plastic wrap for disposable covers!

From contributor Z:
I have used petroleum jelly very successfully in the past. It won't smolder. They make clear vinyl booth coating, but I don't know how it would work directly on a bulb.

From contributor T:
The questioner described glass covers over the lights. Oil, Vaseline... maybe, but messy. Plastic food wrap might be viable; might be best to source and use the peel-off film used on bike racer's face shields and on windshields of Nascar race cars.

From contributor Z:
I am going by the picture, and those appear to be the same lights I used petroleum jelly on. The glass covers have only about 1/4" space from the bulb and do heat up. Again, with this style of light, I'm not sure a peelable vinyl coating will work.

From the original questioner:
Yes, they do have glass tubes that surround fluorescent bulbs. They are sealed fixtures up to spec that came out of an operating room and we do spray solvent based product. I don't think they get that hot, but truthfully not positive about that. I like the idea of a film wrap that could be pulled off and thrown in trash. I wonder if heavy duty saran wrap or the face shield covers would break down in the solvent environment? It would be a real pain cleaning off melted plastic. I would think the olive oil would eventually run down face of glass tubes, but the Vaseline would stay in place.

From contributor O:
A company called Baer Supply carries a type of clear coating for light covers that peels off in layers. It is made by Binks, is water based and can be sprayed or brushed on. Also try a company called Chemco.

From contributor R:
I concur with the above post. We use the Binks material from Baer and have also used Chemco's boothcoat.

From the original questioner:
Thanks - that is exactly what I was looking for. I use Chemco for filters and floor covering. Did not realize they had something.

From contributor E:
Why can't you just give the Pyrex a swipe with solvent whenever needed? That is Pyrex glass on those fixtures? I'm preparing to put in 2 rig-a-light dual 4s in my booth, and one of the great features is the Pyrex tubes and Portland cement seals. They're made to clean easily.

From contributor B:
Since fluorescent lights don't get very hot, I might suggest wrapping the glass enclosure in wax paper. I had an automotive booth that had strip tube florescence fixtures and I taped a run of wax paper over each piece of glass that covered the lights. I had lights on the sides of the booth as well as the roof and the walls where it angled to the roof. Never had a problem.

From the original questioner:
Yes, they are completely sealed units with Pyrex and they are wiped down with thinner, but not often enough to prevent buildup. Truth be told, a thorough cleaning of the booth is not done as often as should be. Filters are replaced and walls and floors are swept often. But a major cleaning is only done 2-3 times a year. I was looking for something that could be put on during those 2 or 3 times a year and just peeled off and recoated.

This is my first booth ever that had wall lights in addition to ceiling lights. They came with the building when I bought it. It is great. Very easy to see how it is laying out. It builds up on housings and horizontal conduit on wall, too. That wax paper is a good idea too. I think we will try the clear membrane. This way it can be brushed on light housings and electrical conduit and peeled off.


From contributor E:
Understood. Even with my AAA, there's powder on the floor after 15 minutes. I'd love to think I keep it super clean, but my booth maid took the rest of the century off. I plan on mounting my 2 approximately 5-6 feet away from the primary spot at 90 and 270. I have plenty of t8s up high, so I only need the light for low case sides on carts. The top of the 4ft side lights will be no more than 5 feet off the floor, so I might be in your shoes if I let things get close to the fixtures. We'll see how good I am about cleaning the darn things once the new toy factor fades. Guessing about 1 day.

From contributor L:
We use the clear coating on the glass and the white on the metal. Works well, but you need to be sure and get it on thick enough so it hangs together as you peel it off later. We use paste floor wax in the booth. When the buildup gets too deep, a floor scraper will chip it off the wax easily.

From contributor A:
Do you think the windshield coatings used by NASCAR would work for your application? They are in layers and you peel them off.

From contributor P:
Contact Blue Ridge Solvents and Coatings in Ferrum, Virginia. They have a spray-on clear boothcoat.