Is it possible to produce this profile with a shaper cutter? If so, how would you set up the fence?

The bullnose portion cuts right to the zero edge so there is not much support here. Would it be possible to set up some kind of shoulder to support the rebated portion of the piece? 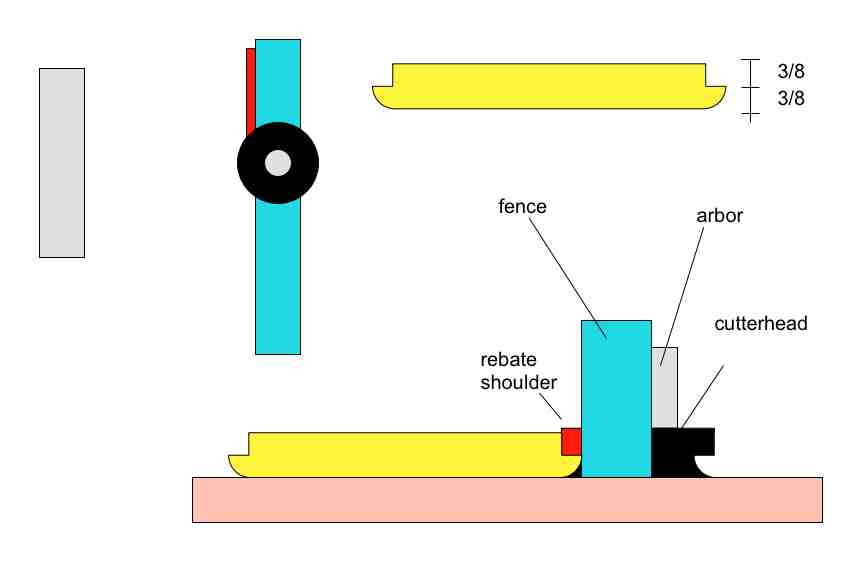 I don't make them very often, just when I need to match an existing door. I always ran the round over face down, then the rabbet face up.With a 1 piece cutter, like in your drawing,you probably won't be able to bridge across the fences, which will make the smaller pieces tricky.

Add a thin shim to the out feed side of the fence to make up for what is being removed.
Or use a split fence adjusted out on the out feed to support the profile .

In order of preference:
1.Split fence with a very slight offset, as D Brown mentions, removing a few thousandths of stock at the point of the bullnose. This like setting up a jointer and must be done accurately to avoid snipe or climbing out of the cut.
2. Let that outer edge of the nose remain on the door and have both fences in line. The edge will support the door if it is only 1/32" wide. Sanding will remove the slight flat.
3. Add a rabbet filler to the outfeed fence so the fresh cut rabbet supports the work after the cut. This also must be set up accurately or you will snipe the tail of the cut, or climb out of the cut as it is fed along the length of the door.
4. Run them twice. First the rabbet, then make a long fence that runs under or over the roundover so the new rabbet is supported 100% by the continuous fence.