Making a radiused wood edge without resorting to segments. January 3, 2003

Question
We have been making our own countertops with a wood edge, and have one coming up that has the bar with half moon shelves on the end. I want the top to be round. I realize that I could mitre some pieces and put them together and then make my circle. Is there another way of doing it to get away from the splices? Maybe taking several thin pieces and gluing and bending? Any other suggestions? (We put the wood edge on first and then the laminate and rout.)

Forum Responses
From contributor E:
We have made the radiused counter edges by laminating thin strips of wood and pressing in a two piece form. Radiuses from 6" to 60" have been made this way. The tighter the radius, the thinner the wood strips. For 6" we have found 1/16" thick works okay.

The inside of the form must match the counter core radius, and the outside of the form matches the finished radius. Let's say you want a 12" finished radius using a 3/4 thick wood edge. The counter core radius is 11 1/4. The inside form matches this at 11 1/4. The outside form radius is 12". We mount the inside form on a larger board, glue up the pieces, stack and clamp the forms together. Let dry 24 hours.

Some tips:
Drill holes through the forms large enough to insert your clamps. Make the wood strips about 1/2" taller than your finished edge height. Don't worry about lining the edges perfectly - they can be trimmed when dry. If making more than one, laminate your forms with P-L.


I think you have the right idea already with the strip lamination. I've never made a half circle edge band but have made several radius corners with this method.

The fact that you edgeband first, then laminate will make the fit between the banding and the substrate more forgiving. The way I've done this is make a male and female clamping caul with a router trammel. You can use the same setup to radius the end of the c-top substrate. I make the jig about 3" - 4" wide out of doubled up 3/4" particleboard or MDF and screw the inside side down to another piece of scrap. You may not have to use an outer caul if you have enough clamps.

The more strips (thinner) you use, the less springback you will have when you unclamp the band. It also helps to cover the clamping jig with wax paper or rub paraffin wax on everything to keep from gluing everything to your jig. I would clamp the edge to the substrate a hair high and belt sand flush, then laminate.


I use the same method as contributor E. I buy ready-made counter top edge radius (2"-6") when I can, but quite often have eating bars or other applications needing a large radius. Laminating in the same order the strips are ripped makes an almost invisible lam. I too edge first and trim after laminate is installed, usually with a small ogee classic. I keep a piece of 2' X 4' MDF that is drilled to accept metal bench dogs 1" OC. Makes setting up forms a snap. I pocket screw the edge on, then sand the edge flush. Been thinking seriously about getting a lipping planer - looks incredibly fast and easy.

From contributor J:
I just made an 11.25" x 2" radiused 1/4 circle maple light valance. Used the male female clamp form mentioned above with strips that were 3/32" thick. I first made the mistake of allowing for spring back by making my form a 10.75" radius and over-bending each leg about 10 degrees. The mistake was that there was virtually no springback.

When making a striped counter edge, remember that only the outside layer shows. You can put your first layers on with staples and screws and then clamp your last layer on in place with cawl blocks. Also, three way clamps that pinch the top and bottom of the top and then clamp the edge work well.

After going to the work of making that custom edge a normal flush router bit is a good way to screw it up. I route from the top using a 1.125" pattern bit, which in a homemade router base is adjustable for depth and edge thickness. Check out the Art Bitterly setup. 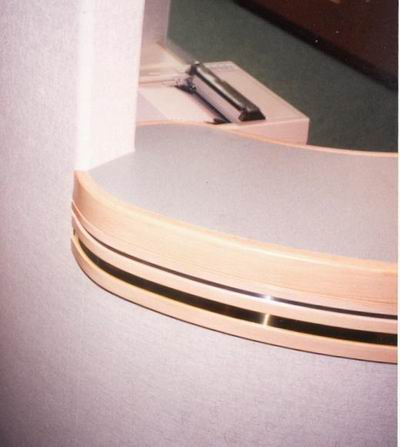 Where do you get pre-made radius corners?

I've done similar radius work like contributor J does. Nailing on all but the last strip is, I believe, the fastest method. The last strip can be clamped with a caul or if thin enough, even taped with lots of tape. Just make sure the strips are only a little bit proud of the substrate, or a strong pull on the tape can cause the top and bottom edges of the strip to seat, but the center to buckle out and your joint not be good. I don't think this is a museum quality way to do it, as the "glue them all together with perfectly matching cauls" method seems to make better glue lines. However, this is the fastest way I know and does give a generally acceptable product. You might try doing all but the last strip, letting it dry, grinding it flush, and then doing the last strip - less to be concerned with when applying the show piece.

I just had a hair brained idea. I wonder if you could use shrink wrap as the clamp for the last strip? Tack the shrink wrap down to the top and bottom and then use a heat gun to do a controlled "tightening". Kind of like a poor man's vacuum press. I know the shrink wrap they cover boats with in the winter is pretty tough, but all I've seen of it is white - not a good idea for seeing your joint.


The lipping planer is the way to go for wood edged counters and any other edge band you apply. I have a Hoffman and am thrilled with it. If something happened to it I would replace it in a heartbeat without concern of cost.

Wilsonart has corners in oak and maple, however they are designed to be applied after the laminate is done. They match the bull nose edge material also sold by Wilsonart. I have used these and it makes a wood counter edge with radiused corners way too easy.


From the original questioner:
I did do one years ago with the forms, but what I really like is the thought of shooting the strips until you get to the last. That sounds like the quickest method to me so that will be my approach.