Question
I just completed the veneering portion of this accent table top. This is my first veneering project. After researching this problem, I realize that I wet the veneer tape too much. Is there a fix? I have removed all visible glue from the surface with water. 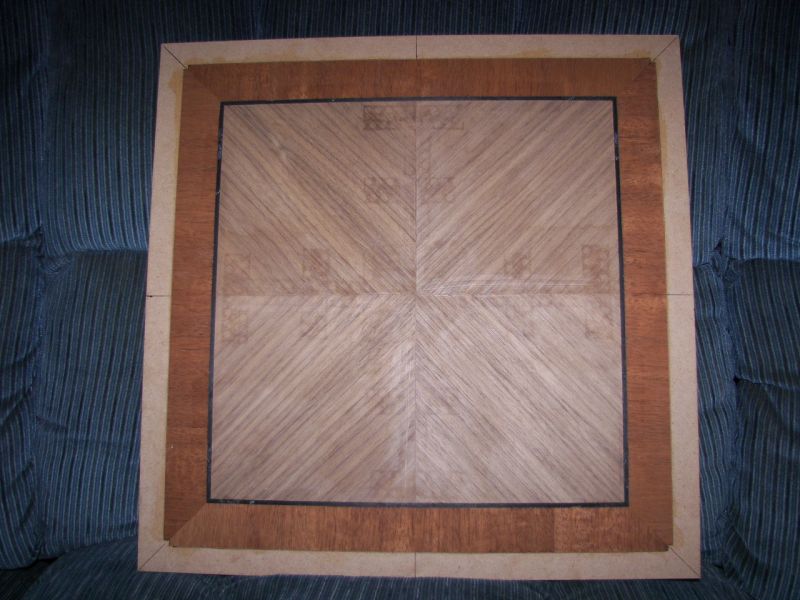 Forum Responses
(Veneer Forum)
From contributor C:
What species of veneer is that in the center? Did you use distilled water?


From the original questioner:
The effected veneer is walnut. I did not use distilled water.

From contributor S:
Now that you have removed the tape with water, you need to sand the whole top. This usually removes the residue. If everything looks nice and even, start at 150 grit, then 180 grit. Wipe the top down with mineral spirits. You should not see any residue. Now you are ready for finish.

From contributor G:
I'd water-pop the whole thing before sanding. Then you'll have a chance at getting rid of those cross-grain scratches as well.

From contributor R:
I would start with a scraper to remove the tape residue. A bigger question/problem is, what are you going to do with those gaps in the border? Looks like your trimming is off. Maybe you could do a diamond inlay to hide those gaps.

From the original questioner:
Thanks. I rechecked and ensured that all of the glue residue had been removed from the wood surface - it had. Followed with a thorough wipe down with denatured alcohol. Proceeded by a gentle sanding with 150 grit, this removed virtually all visible shadowing and scratches. At certain angles, you can still detect where the staining was/is. With mineral spirits applied, it looks great. I think I'll proceed as is with this one and make my customer another one.

Contributor R, are you referring to the corners? All of the edges/joints are tight. I still have to trim the panel to final size which will remove the odd corners.


From contributor C:
For what it is worth, I use solid gum tape - no holes. And the tape is often either on the entire piece (marquetry or small pieces involved with decorative veneering) or only on the seams. I don't have any of the pieces running perpendicular to the seams as you did.

I tape seams with clear packing tape. I can see through it, I avoid the problem you just had, and I don't like to get my veneer wet. You have to be careful how you remove it on some species, but it's rarely a problem.


From the original questioner:
Thanks again for all of your responses. In the future, I think I'll avoid the veneer tape.

From contributor C:
How are you going to completely avoid the veneer tape? What will hold the pieces together while you glue it up in the press?

From contributor S:
Contributor C is right. I have been veneering for 20 years and never had any tape residue show up after sanding and finishing. You might be afraid of sanding the veneer too much because of the thinness of commercial veneered panels. If you lay up the veneers yourself, you can sand a lot more than you think. You still have to be careful, but you can still sand your panels.

From the original questioner:
I appreciate your help. I intend to use either painter's tape or clear plastic packing tape. Just so I am clear, was this problem caused by over-wetting the tape? If so, I'll do some practice work and try to be proficient doing it the right way.

From John Van Brussel, forum technical advisor:
A couple of things to try regarding correct wetting of the gum on the tape. Wet a short strip of the gum tape and fold the moistened gum tape onto itself. If the tape moves easily on itself, you have to much water. If it stays put, you have the correct amount of water.

Also, you can use distilled water to take any hard or soft water issues out of the equation.

Some species are prone to what I call the suntan effect. Areas under the tape do not receive the same amount of light as the surrounding wood. The surrounding wood is darker than the wood which has been under the gum tape, leaving a tan line which is a ghost of the tape you used. You can prevent this by covering your veneered faces or panels with cardboard, UV resistant plastic, or anything similar which will block the light on the taped veneer. This suntan effect can occur in as little as 4 hours in species like cherry.

From contributor R:
If you intend to use clear packing tape, practice first. That stuff can really stick. I sometimes use it to hold long pieces of 3mm solid edgebanding, and it can pull fiber really easily. And that is just from hand pressure. I would imagine that in a press or vacuum bag, some brands of that stuff may become one with the wood.

From contributor Z:
Nice work for a first try! The marks are normal from veneer tape - don't sweat them. Someone mentioned using tape without the perforations and that will eliminate the little round dots, but the issue is the glue. A form of hide glue and probably not a stain at all. The very best way to clean up after removing the tape, for me at least, is to use a cabinet scraper with a very sharp blade. You can slice off the thinnest bit of the veneer surface and, with it, the glue marks. Sanding will do the same, but I've used a cabinet scraper my entire career and most of the time can avoid the whole sandpaper issue altogether. The clear packing tape idea is good, but it can be a real bear to get off after the piece has been in the press, and I have seen some tearing of the veneer and separation of the adhesive from the tape film, which then must be removed with the appropriate solvent.

If you are using a modern adhesive to adhere your veneer, you can safely wash the glue marks off with a damp sponge without fear of ruining the veneer as well.