A void in the plywood veneer press caul caused a bubble in a trophy tabletop. But it all worked out in the end. March 28, 2012

Question
I just pressed an 8' round table using urea formaldehyde glue. Upon removing it from the bag, I noticed a small section about (2" in diameter) in the pommele sapele border that have raised undulations. I tracked the cause down to a void in the plywood caul that did not exert enough pressure in this area.

I have had some success with slicing and ironing these type of defects out when using PVA, but due to the complexity of this layup, I chose urea formaldehyde glue. Is there any way to soften the urea formaldehyde and press out these bumps? I realize it is moisture and heat resistant. Is there a solvent like MEK or other noxious chemicals that would work? Re-veneering the entire top because of a 2" defect is out of the question. Every other part of the top looks spectacular.

Forum Respnses
(Veneer Forum)
From contributor C:
When we first started hot pressing, I called the chemist at Borden Adhesives (now Hexion); I asked what it would take to loosen UF glue (we got some on a batch of PL panels). He told me if we figure it out, let him know. In short, when it cures, it's done. Sorry to bare bad news.


From contributor G:
If you want to experiment, you could try getting some methylene chloride from the plastics shop. It is used to weld Plexiglas by dissolving the plastic. It is also used in industrial paint strippers. If you do some tests on some cured UF glue, it may dissolve the glue enough to restick. Then you could inject some into your bubbles with a syringe and clamp 'til the methylene chloride evaporates. No guarantees - just an idea. You'll be breaking new ground here.

From the original questioner:
Contributor G, I have some of that leftover from a project - I will try it out. The other option I thought of is to carefully slice out the blistered veneer, cut out the excess glue, and then glue the blistered veneer back on. Tedious, but no more than peeling off all this dang veneer tape.

From the original questioner:
No luck with methylene chloride. A hot iron seems to allow some flattening of the cured UF. Another idea I had is to build up the area with shellac and sand it smooth. At least it wouldn't be as noticeable to touch. The wild figure would also help to mask the undulations.

From contributor J:
Can you route out the blistered area back to a seam and inlay new material? Making it a two-ply beforehand might help. Feeling your pain and wishing you luck.

From contributor Y:
In the future, don't use plywood as a caul. Not only will a void give you a problem like you have, but some of the ripples in plywood will also cause problems. 1/4'' MDF with a thin plastic on it is perfect.

From contributor A:
I feel for ya, and I'm with contributor J. Since it's on the border, and it's pommele sapele, I'm sure you could route out the small section and glue in a new one with a caul and a few clamps. That stuff is so wild you'd never see it.

From the original questioner:
I routed and replaced the section. I am very glad I ordered a few extra slices of that flitch. That sapele was so wild, I could barely remember which segment it was in. Here is how it turned out. 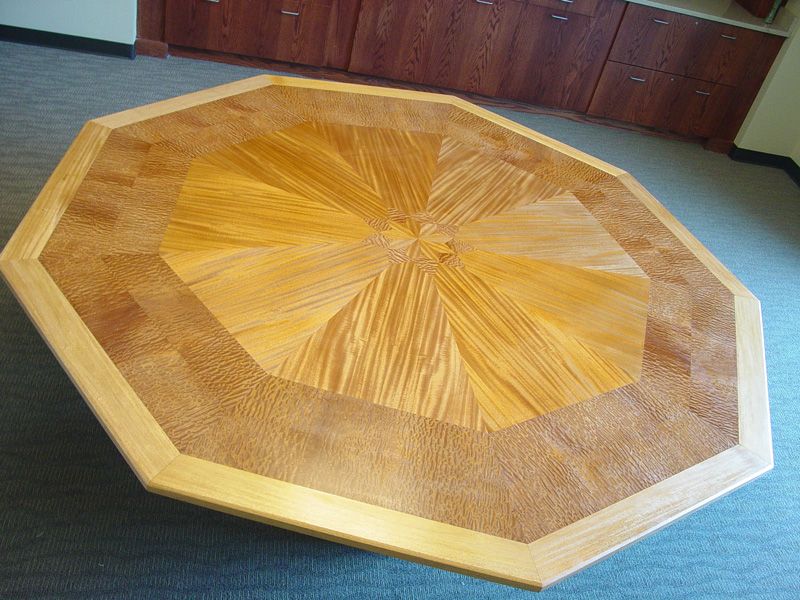