Advice on adhesives, assembling and joining the staves, and woodturning methods for replicating historic old architectural columns. May 12, 2013

Question
I have removed several badly deteriorated 100 plus year old columns that I need to replace, disassembled them, and examined the staves and splines. My client wants the replacement columns made by the same methods to follow historical preservation guidelines. I cannot detect any signs of glue in any of the dados in the staves, on the staves' bevels, or on the splines themselves. I know that hide glue will break down, but I expected to see some signs of glue having been used. Is it possible that these columns were assembled without any glue? If so, how did the makers keep them from coming apart on their lathes?

Forum Responses
(Architectural Woodworking Forum)
From contributor B:
True, "hide glue will break down" (along with all animal or vegetable-based glue). So what do you suppose is actually happening to the glue when it is in the process of breaking down?

Answer: Microorganisms are ingesting and digest the glue (which is pure protein and starch) and leaving nothing behind (which isn't being re-ingested and digested over and over again). Add a little rain-water rinse and viola - the mystery of the disappearing glue. Crack an egg, splatter some milk, or smear a bit of fish or animal fat on a stick of wood and leave it outside for the next 100 years or so. Of course it disappears (just not before your very eyes).


From contributor S:
I think the only way a column could be built without some sort of glue would be to have the staves curved in length so the ends are further from the center. Then the ends could be pulled together towards the center in the same way a barrel is built. Caps could help retain the staves in this tension arrangement, and joints would be tight. While possible, I think it would be unlikely. Older columns were often structural, and a bunch of sticks held in a circle will not do much for holding stuff up in the air.

I would work towards convincing your customer that some 21st century glue like TB III would be good for columns, good for historical, and good return for expended resources. The original makers would have used it if it was available. If you want to be truly historical, you could come down with yellow fever in the middle of the job.


From the original questioner:
I have come to an agreement with my client on how to proceed. All of the new columns will be glued with a modern glue of my choice. He now recognizes that the new columns are not themselves historical, though they may be so in 100 years! As such, making them by today's best practice makes sense to him, now. I will still produce columns that are correct for the building and its age. My intent is that my columns will look like the originals did when first installed.

I am about to conduct a trial glue-up using epoxy. I am concerned about the open working time I will have to assemble long staves with splines. Epoxy should provide lots of open working time, but I will need to control starving the joints during clamping and controlling slumping-likely I'll use a thickening agent in the mix. My client, for his part, has taken a bunch of the old staves and splines and plans to try cleaning them up and attempting to build a new, old column. One he will do without glue, he says, and one with hide glue, as an academic exercise. At least I don't have to!


From contributor B:
It sounds like you've thought this through fairly well. I have a few tips which might be of interest. A simple set-up can help a great deal in the assembly of the wood staves. I use half-circle concave plywood forms set up directly on the lathe for convenience. Glue is applied to the edge of each stave and then laid into the supporting half-shell.

After a hemisphere of staves are set in place I set circular plywood discs at each end which are equal to the inside diameter of the column staves. This supports the assembly of the upper half. Strap-clamps complete the job. The plywood discs are knocked out before the clamps are fully tightened. Working this way, the whole column shaft is assembled and clamped within a few minutes. A pair of extra hands makes the job much easier. I don't normally use epoxy, just any waterproof glue, straight from the squeeze bottle.

I also recommend seal-coating the inside surfaces of each stave prior to glue-up (and full sealer to the completed column before shipment.) Wood columns should always be installed immediately upon arrival to the job-site and not allowed to lay around under the sun. (This should always be stipulated in writing and signed or initialed by the customer). The staved shaft is then ready to be turned full-round (with the proper entasis). Paper glue-joints can be employed for half column requirements. The caps and bases are turned separately on a face-plate. Manufacturing wood columns is fun but any mistake can spell doom. Proper installation is also essential as exterior columns need to be vented both at the base and head.


From contributor S:
One photo shows assembly with the strap clamps going on, and several hands. Contributor B's supporting half circle is well illustrated. In the foreground, a column is set up on the slow turn lathe for final shaping, and the finished products. 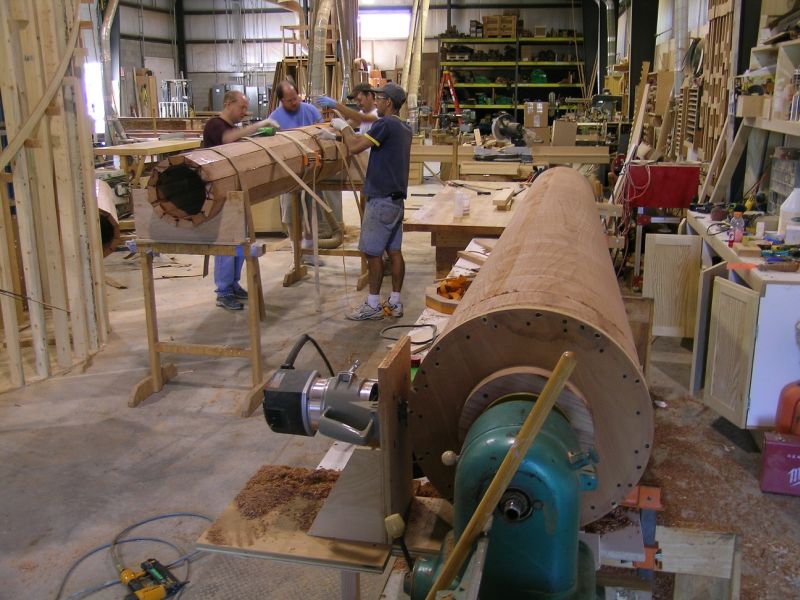 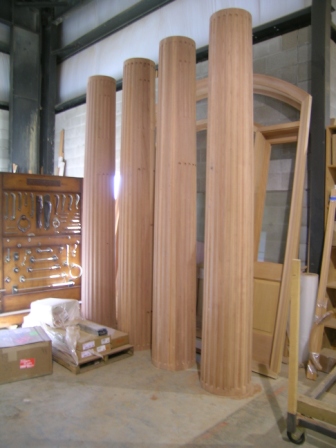 
From contributor S:
The history behind the columns above: They replaced the rotted originals on the Ovid Butler House, the house built by the abolitionist that started Butler University in Indianapolis. The columns support a balcony/porte`cochere where Abe Lincoln gave his first public speech after the signing at Appomattox.

From contributor M:
Columns also need to be vented or they will rot from the inside, sealed or not. A hole down through the top on the non-weather side covered with insect screen and a notch in the base will do the trick.