Reproducing a Period Door from a Photo

Historical reviewers tend to care a lot about appearance of building details, but less about construction. Here, a woodworker gets a leg up on the research to recreate a passage door that can pass for period. April 22, 2014

Question
I have a customer that asked me to quote a door for her. It needs to match what was there originally. At some point someone replaced the original door and to keep the historic landmark certification the city is requiring her to put it back the way it was. All I have to work from is a photograph. Does anyone have an idea how this door would have been constructed? I assume it would be solid core with a veneer face but I'm not sure how the glass would be stopped. Would you route the oval then veneer the inside edge? Would you use glazing putty to hold the glass in or would I need to make stops? 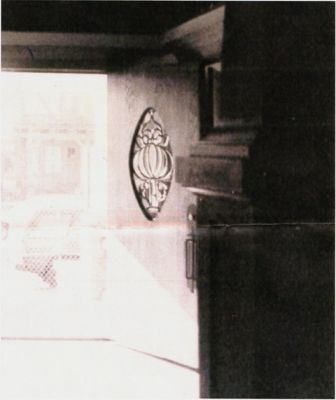 Forum Responses
(Architectural Woodworking Forum)
From contributor M:
If it was a solid door I doubt the edge would have been veneered. The glass most likely would have been held in place with wood stops. Glazing is not usual for doors with this type of glass. It appears to be beveled glass, most likely made with zinc instead of lead and it would have weighed more than the normal stained glass window. I would also guess the glass was textured with what we call glue-chip.


From contributor D:
The glass looks like it is put in from the back of the door from the picture. Maybe you need to make special molding in pieces shaped like the oval like opening.

From contributor S:
Flush doors like this came into wide use just after WW2, with glues much improved and a more modern look was desired from the old frame and panel doors.

The faces are thin plies - often about 1/8" to 1/4" thick, same on both sides. The cores could be lumber core, plywood or later, particle core. Edges were most often a matching species, thick enough for site fitting, beveling and screw holding. Also top and bottom rails were solid wood for water resistance. Also, a lock block of solid wood was often added for mortise lock boxes to be fit into. The idea was to provide an all-wood door to preserve quality.

Windows - or door lights - were often cut into these doors. Usually two rabbeted moldings were used, one fixed to the outside, and then the glass installed from the inside, then the other moldings. There are as many ways to do this as there were woodworkers, so there is no definitive way to say what was there, without more info. If glazing putty was used, this was typically from the exterior, and would be on earlier rather than later doors.

Your task is to create a reasonable cross section of what you are seeing (or think you are seeing), and submit this drawing for approval. If you can find out a date range of when that door was made, you might be able to find similar dated doors through your local architectural historical society or the folks wanting this to go back to the original.

In my experience, historical folks are all about the look, and less about the details, and will allow a better design as long as the new work looks like the old. If you and one of the people that will approve the design can sit down with large format quality reprints, and a magnifying glass and you sketch some alternate ways of doing the cross section, you should be able to get this to pass easily. It is an opportunity to come out as the expert, and should place your shop in a favorable position. Work with them, you all are on the same side, and have fun.


From contributor J:
I'm just surprised they would consider that historical? There's probably a few people on the board that are older than that door!

From the original questioner:
I was surprised too. The door they are taking out looks much more appropriate for the house. Thanks for the advice.

From contributor A:
I'm one of those historic reviewer types you're talking about. As historians, we'll always go by a historic photo that shows an original detail over a replacement detail we might have grown accustomed to today. Each jurisdiction is different in how orthodox they are about it, but typically, historic reviewers don't care how something is put together on the inside if the outside has the right look.

That said, this looks like a hardwood veneered door. They were available 1890 to 1920 and then this door type jumped to commercial use instead of residential. They were called "sanitary" or "bungalow" doors. Doors without molding around the lite were typical towards the end of this period.

The Building Technology Heritage Library has hundreds of original catalogs. Here's one of them: W.D. Crooks and Sons (1923). It has images of doors close to the one in your photo and shop/section drawings showing their construction method and how the sash frame was notched into the core.


From the original questioner:
Thanks, that's a great resource! I didn't see a detail of how the glass was stopped but the core was good to see. I figured they didn't use particle board and veneered MDF door skins like they do today. I found a source for a door with similar construction to the link you posted. I decided to outsource as we do not have the equipment to build this type of door in house. We will see if she is willing to pay what they want for this door. Thanks for all the help.